San Jose largely rebuilt its downtown by shelling out lavish, risky subsidies. From the 1980s on, the city lured developers to its hollowed-out center with cash incentives—$38 million to the Fairmont, $19 million to the Hilton and $35 million to Adobe Systems. Though the exact accounting of direct subsidies remains un-tallied, estimates peg the total somewhere in the hundreds of millions of dollars out of the $2 billion invested in downtown by the city’s since-shuttered Redevelopment Agency.

As prophesied by regional business coalitions such as Joint Venture Silicon Valley and the Silicon Valley Leadership Group, wealth proliferated in the aspiring tech capital. Cisco, eBay, PayPal and other corporate powerhouses attracted a burgeoning influx of educated, well-heeled consumers. Per-capita incomes rose alongside property values. Public revenue gutted by California’s tax revolt of the 1970s got a much-needed boost, which allowed local governments to invest in a new light rail system, a sports arena and other public infrastructure.

But prosperity was less equitable than predicted by business boosters. San Jose’s economic ascent came with declining wages, a growing wealth gap and skyrocketing housing costs while tax-funded gifts to private companies came with few strings attached—and no enforceable commitments from them to buffer their own impact. Thus, Google’s tentative plans to root itself in San Jose’s core have understandably inspired polarized reactions and intense debate about how the city should negotiate over future growth.

With City Manager Norberto Dueñas’ impending retirement and Assistant City Manager Dave Sykes stepping up as his successor, there’s also the question of how the latter will lead the city’s bureaucracy through the anticipated building boom. Meanwhile, given the way the city structured its agreement with the advertising giant, there’s concern that it limits transparency and democratic input into a development that could potentially reshape San Jose’s spatial economics.

Of course, the conversation isn’t just about Google, whose proposal would bring an estimated 20,000 new jobs and 2,500 new homes to the city center, but also the inevitable transformation that a project of its size would precipitate.

If one thing is certain, San Jose Mayor Sam Liccardo insists, it’s that the city’s costly handouts to corporations are a thing of the past. (Well, except for multi-million dollar tax breaks for downtown high-rise developers). He says that goes for Amazon, too, which recently called on cities to compete for the online retailer’s second headquarters, which would come with a projected $5 billion of investment and 50,000 new jobs.

“If we submit anything in response to Amazon’s request, it will not include tax breaks, subsidies or any public dollars,” the mayor says. “On the other hand, if there are any private property owners or developers that are interested in working together to make a pitch, the city is happy to facilitate that. But we’re not in the business of throwing taxpayer dollars at corporations.”

As with any company, Liccardo says, Google will pay a fair price for city land around Diridon train station, the site of the proposed 8 million-square-foot Googleplex.

“We’ve made it clear that we’re not offering any subsidies to Google and that they’re going to make the full market price for city-owned land,” Liccardo says. “I want to illustrate that we’ve come a long, long way from the time when we sort of prostrated ourselves at the feet of corporations.”

But to stakeholders and people who live in the shadow of Google’s planned expansion, assurances about what the city won’t do is less important than what it will do to advocate for their interests. By that measure, things seem off to a shaky start. That the city struck up negotiations with Google over land sales without even broaching the subject of community benefits marks a missed opportunity, according to some observers. Other major cities—Los Angeles, Oakland and Portland, to name a few—initiated those kinds of discussions far earlier in the process, says Ben Beach, who heads the Oakland-based Community Benefits Law Center. Since a landmark community benefits deal secured by the city of Los Angeles with construction of the Staples Center in 2001, he adds, these types of agreements have become pretty standard for major developments.

“That’s exactly the time to be having this conversation, before the most important transaction in the project,” Beach says. “Once the city sells the land to Google, it’s going to have a lot less leverage.”

Councilman Don Rocha made that point back in June, when he cast the lone vote against the city’s exclusive talks with the multi-national company. He still says the city should have at least issued a set of guiding principles from the very beginning. Additionally, he objects to the way the deal was crafted to allow the city manager to extend negotiations for another year without necessarily having to bring it back to the City Council. 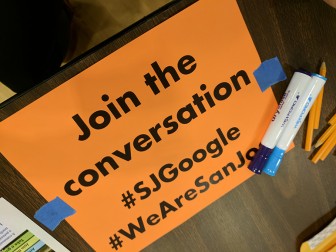 A leaflet at a community meeting hosted by community groups to talk about Google's potential impact. (Photo by Jennifer Wadsworth)

“My vote against this had nothing to do with Google,” says Rocha, who plans to run for Santa Clara County supervisor after he terms out from the council next year. “It was a statement to my colleagues that we could have done this differently.”

Though he commends the mayor for requiring public outreach as it works out a deal with Google, the District 9 councilor wanted to take a stronger stance on “community benefits”—a phrase preferred by activists and labor unions—by heeding the direction of freshman Councilman Sergio Jimenez, who penned a memo that would have formalized certain expectations at the outset.

Jimenez says he wanted the city to at least consider in its negotiations how Google’s pitch fits into the broader goals of creating sustainable wages, preventing displacement and alleviating the affordability crisis. If anything, he adds, it could have reassured residents and garnered more widespread support for the project. But the council killed his motion, and Jimenez voted in favor of commencing negotiations with Google anyway.

Evelyn Robinson, who lives in downtown’s eclectic Delmas Park neighborhood in the path of Google’s planned expansion, says the city should not only have drafted guidelines from the get-go, it should have hosted public discussions about Google’s—or any company’s—planned move long before striking up negotiations.

“I know the city’s saying it’s still early in the process, but when you’re talking about a project of this size and with this impact, it’s not early enough,” says Robinson, who has rented from a 117-year-old Victorian triplex in the Diridon area for 25 years. “They’re putting the cart before the horse.”

But cities hesitate to ask too much, Robinson says. The fact remains, local officials have to woo global corporations that have the ability to take their business elsewhere, which puts cities and states in competition with one another to lower taxes and standards. It’s a reality that leaves little room for public demands, she laments. 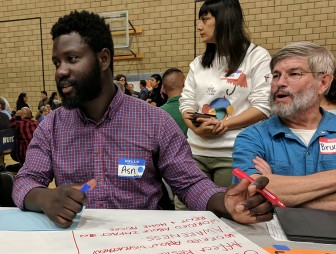 At a forum hosted last week by a coalition of community groups called Silicon Valley Rising to discuss the Google project, many attendees expressed anxiety that urban policy no longer attempts to shape economic growth so much as to hew to the market in search of the greatest returns.

They talked about how cities starved of tax revenue have increasingly come to rely on corporate philanthropy, which, without enough pressure from constituents, can preclude democratic process. In breakout discussions at the Washington Community Center, they plotted how to advocate for the public’s interest in a system that turns cities into entrepreneurial ventures and in which the working poor, renters, small businesses and ethnic minorities tend to lose out.

Debra Watkins, founder and director of the California Alliance of African American Educators, told the people at her table that she’s skeptical of Google’s ability to spur equitable growth, considering the company’s overwhelmingly white workforce and its reliance on a low-wage subcontracting class disproportionately staffed by people of color. If the community had these discussions when she and her husband came to the region 40 years ago, she said, perhaps Silicon Valley’s present inequalities would be less pronounced and discussions about future growth would be less fraught.

“I don’t want another generation of the digital plantation taking over Silicon Valley,” Watson stated emphatically. “We just want to make sure that black people aren’t marginalized once again.”

In a brief address at the start of the forum, downtown Councilman Raul Peralez defended the city’s decision to start negotiating with Google before conducting any public outreach. He echoed Liccardo’s claims that it’s too early in the process. Like the mayor, he talked about how Google can help the city chart a new course from a history in which San Jose houses the region’s workers while its neighbors reap tax revenue from their employers, a history in which San Jose has failed to capture enough of the region’s wealth to sustainably fund public services.

“I definitely think that we have plenty of examples for lessons learned, and not just within our own city,” Peralez told San Jose Inside in a phone call days before the meeting. “We need to learn from the missed opportunities here, but also the way things have turned out in other parts of the region. Look at Cupertino and the Apple project, which wasn’t built with the community in mind. We need to be firm and clear about what it is we want in terms of development. And that does mean we have to talk about development in the context of its broader impacts.”

As Jimenez sees it, however, San Jose has long lacked the confidence to request much from its corporate suitors. He says some of his colleagues consider the city a wallflower that should be grateful if anyone asks to dance.

“But Google came to the dance, they bought tickets, they’re choosing to dance with us,” Jimenez says. “It takes two. And it shouldn’t be presented as though the city is turning them upside down and shaking every last penny out of them.”