Not everyone should take a crack at comedy, especially senior policy advisers to the mayor of San Jose. Add in a little social media and a reference to the worst person in the history of the world and the results will go poorly.

Khanh Russo, the director of strategic partnerships and innovation for Mayor Sam Liccardo, celebrated his birthday on April 20. In an attempt at humor, he posted a message on Facebook passing along well-wishes to other people with the same birthday. The names included: George Takei, of Star Trek fame; Joey Lawrence, best known as the older brother on the ’90s sitcom “Blossom”; Mother Angelica, a Franciscan nun; and Hitler.

The German chancellor and leader of the Nazi Party, Hitler. The Hitler who pulled the world’s nations into war and is responsible for the genocide of 6 million Jews and approximately 5 million more people.

An outraged reader sent San Jose Inside a screenshot of the post, which stayed up for at least a couple of hours before being removed. 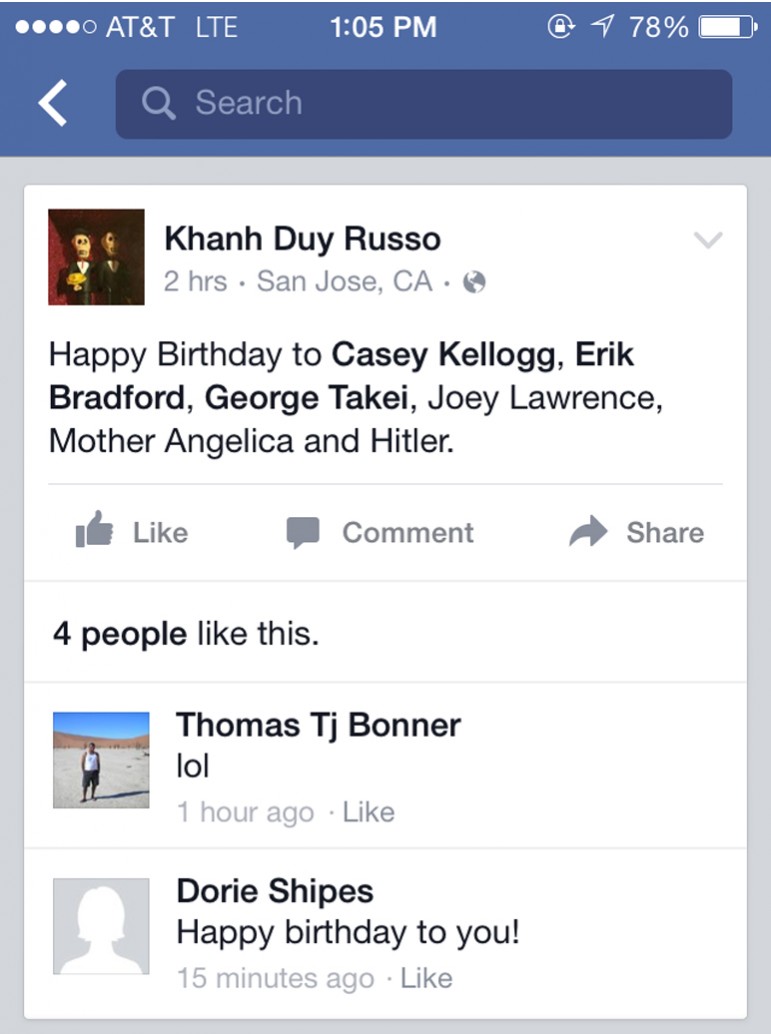 Russo, who was reached by phone at his office Thursday, admitted that he posted the message as a joke before realizing “it was insensitive and inappropriate.” He added that he was looking at famous birthdays online and thought to himself, “‘Oh, look, Joey Lawrence. He’s really cute. And, oh, Hitler, that’s odd.’ But I put him up there.”

Following that conversation and a briefing with the mayor’s spokesperson, Ragan Henninger, Russo called San Jose Inside for a second conversation.

The timing of the post could be seen as especially disrespectful and ill-timed because it appeared just days after April 16, Holocaust Remembrance Day.

Henninger sent a text Thursday evening noting that Liccardo and his chief of staff, Jim Reed, were aware of the situation and spoke with the city attorney.

“We are taking the matter seriously, but can’t comment on specific disciplinary actions,” Henninger said.

San Jose Inside reached out to several political insiders about the matter and the reaction was mixed.

“Bottom line, you don’t embarrass your boss,” said one person. “It’s just so stupid. What can else can you say?”

Another source said this could be a test for Liccardo. “That type of poor judgment should be purged from a position such as the mayor’s office, especially three and a half—four months into the term.”

Liccardo’s mayoral campaign posted a video to YouTube in October featuring Russo and his husband, David, who have been avid supporters of the new mayor. According to the video, Liccardo officiated their wedding at City Hall—the first same-sex marriage ceremony to take place at 200 E. Santa Clara St.

Russo also volunteered on the campaign, he said, and records show he made a maximum contribution—$1,100—to Liccardo on the first day allowed.

When asked why he supported the mayor during the campaign, Russo responded, “Cause he’s amazing.”