The iconic neon marker mysteriously vanished a few months ago, a short time after OSH closed for good. The only evidence was grainy surveillance footage showing a couple of guys dismantling the sign and driving off with it in a white pickup.

San Jose police launched an investigation that just this week led them to the culprit: a misguided collector concerned about the sign’s preservation.

Detective Justin Holliday, who works in SJPD’s Financial Crimes Unit, was the one who identified the suspect. Agency spokeswoman Sgt. Gina Tepoorten told San Jose Inside that no arrests have been made, but the case will be submitted to the Santa Clara County District Attorney’s Office for review. 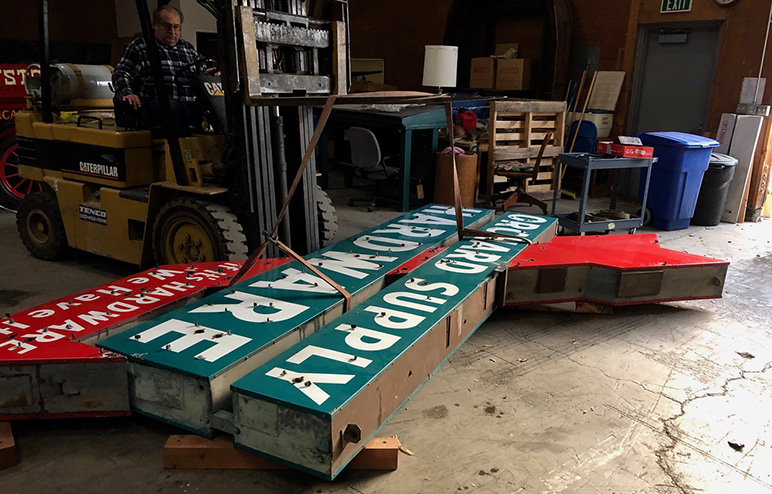 The person who took the sign returned it Thursday morning.

History San Jose now has possession of the green-and-red arrow sign, which will require substantial repair. “Many of the neon pieces were broken to begin with, but now it needs a lot of work,” History San Jose curator Ken Middlebrook said.

“Thankfully, we already got an offer for the restoration.”

Middlebrook declined to identify the apparently well-intentioned sign thief, who reportedly claimed he was unaware of the hullabaloo caused by its disappearance.

“The main thing is that the sign is with us,” he said.

Lowe’s, the rightful owner of the sign, officially donated the piece to the Preservation Action Council of San Jose and History San Jose, which plans to erect it next to an OSH logo-emblazoned boxcar at History Park.

Middlebrook commended the San Jose Police Department for solving the mystery and returning the sign to good hands. He said he’s also grateful for support from former county Supervisor Ken Yeager, who proposed the idea of creating an inventory of historic midcentury signs, and Councilwoman Dev Davis, who offered to spread the word about the need for donations to get the OSH sign back in working condition.

“We’re thrilled,” said Brian Grayson, head of the Preservation Action Council. “At first, I was skeptical. The longer it was gone, the less chance I thought there would be to find it. So I’m very happy to hear that it was recovered.”

The neon OSH sign stood at West San Carlos Street and Royal Avenue for six decades before its unauthorized removal in early November. Middlebrook said it represents a significant era in the city’s history and hearkens back to the region’s agricultural past.

“It’s just been part of our landscape for so long,” he said. “Pretty much anybody who’s been in the community for any length of time has seen it, or shopped at OSH at one time or another. So when it went missing, that really resonated with people.” 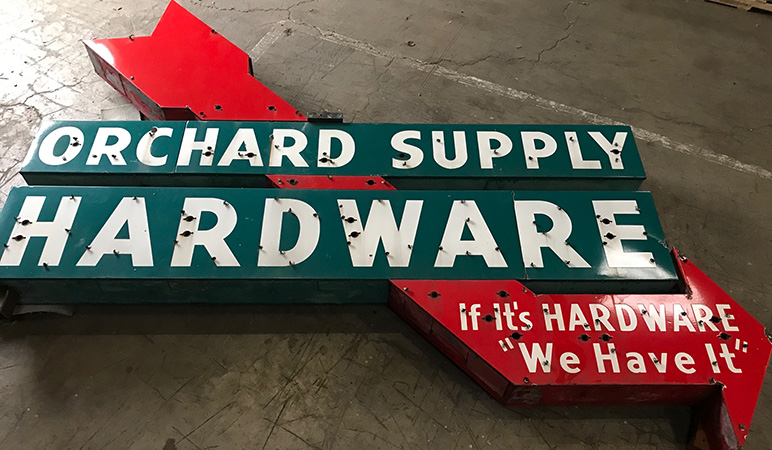 The recovered sign is in fairly good condition. (Photo by Ken Middlebrook)