Though fewer people have been filing complaints against San Jose cops, a greater share of those cases resulted in officer discipline.

That’s according to the latest annual report from the city’s civilian police monitor, which found that citizen complaints fell by 38 percent from 357 in 2013 to 222 in 2017. The office of the Independent Police Auditor agreed with the conclusion of SJPD’s internal affairs in 83 percent of cases overall and 73 percent in cases alleging excessive force.

But the rollout of body cameras has coincided with a rise in sustained findings to 16 percent of all claims—the highest rate since the city founded the office 25 years ago. In the past five years, SJPD disciplined officers in 145 cases of misconduct with penalties ranging from additional training and counseling to suspension and termination. 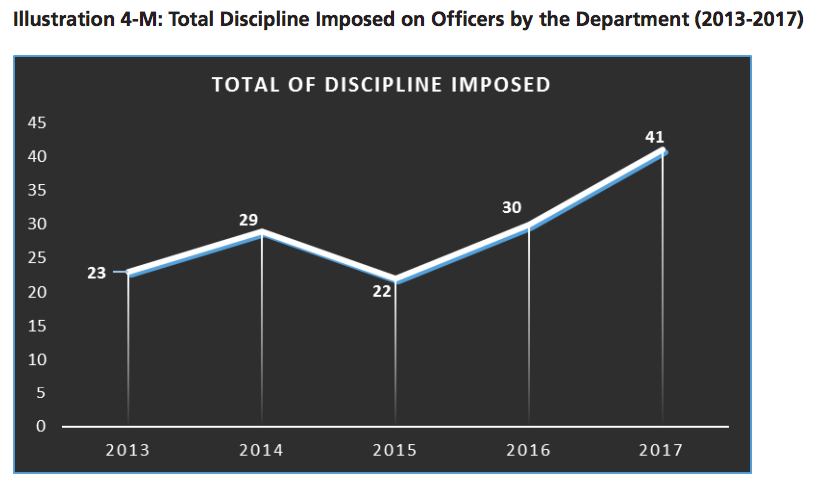 Also in 2017: complaints about use-of-force fell and SJPD sustained a complaint about bias for the second time in the agency’s history. There were eight officer shootings last year, up from five in 2016 but down from a high of 12 the year before that. Of the shootings in 2017, half were fatal and five involved a person of color.

The year-in-review authored by Independent Police Auditor Aaron Zisser comes up for discussion after 6pm at Tuesday’s City Council meeting. It’s the inaugural report for the new IPA, who came to the job last fall after a 12-year run as a civil rights attorney.

The 143-page document spans 15 chapters that cover topics such as use-of-force, psychiatric intervention and biased policing and concludes with 10 recommendations. Zisser places particular emphasis on police interactions with mentally ill people and the need for more resources to investigate domestic violence and sexual assault.

SJPD lost an outside $900,000 grant, which took a toll on its already short-staffed Family Violence Unit. Just two officers and one sergeant investigated upward of 3,300 domestic violence cases from 2016 to last year, according to the auditor’s report. Most of those cases involved felonies.

“Nonetheless, SJPD reported recently its need to cut back some of its proactive policing efforts to combat domestic violence and support services offered to survivors,” he writes.

San Jose has also seen a significant jump in reported rapes, from 451 in 2016 to 571 last year—double the number from 2012, according to the IPA report. Some other violent crimes have increased, too, but at nowhere near the same rate.

SJPD has requested additional civilian staff for its family violence unit to help keep up with the caseload. The IPA report urges SJPD to add sworn staff as well. 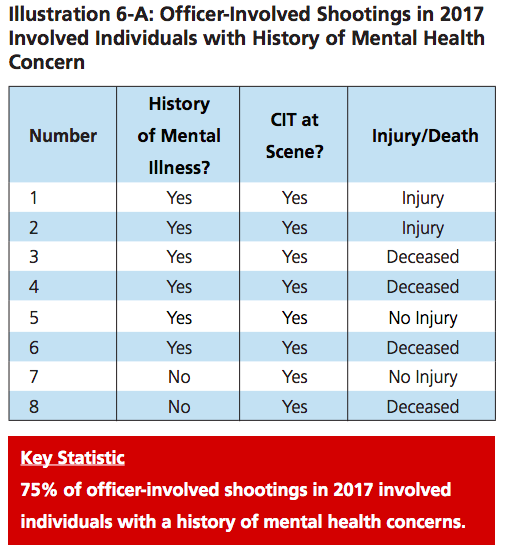 One asks SJPD to transport people in the throes of a psychiatric breakdown to the hospital instead of jail, even if there’s enough ground to accuse them of resisting arrest.

Another recommendation encourages SJPD to have officers undergo refresher courses in crisis intervention. The third directs SJPD to offer people they encounter in the field with a list of mental health agencies and resources.

In 2017, San Jose police fielded 4,182 calls for service that required crisis intervention-trained officers to respond. Though SJPD has offered such training since 1998, Chief Eddie Garcia only made it mandatory for all officers since 2015. And a third of the force had yet to receive the training by the end of 2017, according to the IPA report.

The report also pointed to a racial disparity in police use of force. In a review of more than 100 cases from 2015 to 2017, officers were more likely to take white suspects to the hospital and their minority counterparts to jail in use-of-force cases when no charges are filed. White people were subject to 22 percent of all force incidents but comprised 37 percent of incidents that resulted in no charges.

In his executive summary, Zisser lays out his approach to oversight.

“We routinely hear from community members: what is any of your work actually going to change?” he writes at the outset of the report. “For me, as the new IPA—I started in October 2017— this is the central question. Now helming an agency that is often criticized as being ‘toothless’ to accomplish any real change, I have a background—as a former U.S. Department of Justice civil rights attorney—that had allowed me to apply enormous resources, access, and authority to ensure broad-based systemic reforms in response to constitutional concerns.”

San Jose’s police department may not be an agency in constitutional crisis, Zisser acknowledges, but there’s always room to improve.

“That means tough, uncomfortable, honest conversations with SJPD officials, city leaders, and community members,” he writes. “It means showing up at SJPD’s worst moments, while trying to acknowledge SJPD’s progress and successes.”

In a memo to fellow council colleagues, the mayor suggests striking up negotiations with the police union to better understand their positions on allowing the IPA to review all officer-involved shootings and uses of force, all department-initiated investigations and all arrests and force incidents by the city’s park rangers.

Zisser also proposes a number of changes to his role, including enabling the office to help draft SJPD policies and allowing it to review officer-involved shootings and other critical incidents that haven’t been the subject of a citizen complaint.