Parents of a mentally unstable teenager shot and killed by a San Jose police officer say a report by the District Attorney’s office, clearing the officer, ignores evidence that the encounter unnecessarily turned deadly.

On the morning of Aug. 12, 2014, 19-year-old Diana Showman called 911 and told the operator she had an “uzi” and was going to shoot her mother and brother if police did not respond to her home, according to the DA’s report. In a phone call that lasted more than 20 minutes, Showman reportedly told the dispatch operator that her family members were locked in one of the home’s rooms.

In fact, Showman was alone in the house and had no gun.

Police officers arrived at the Blossom Hill Road home and ordered Showman to come out and surrender. She was seen on witness video of the incident holding a large black object that police believed was a gun, but actually was a spray-painted power drill. While officers, guns drawn, ordered her to drop the object, Showman walked back and forth in a “catatonic” state while at times raising the drill and pointing it at officers. She also held a cell phone in her other hand but dropped it at some point.

San Jose police Officer Wakana Okuma, who had training to deal with people suffering from mental health issues, took the lead in instructing Showman to drop the weapon. After walking back and forth several times, Showman reportedly approached Okuma and raised the drill to point it at the officer. Okuma yelled, “Stop it. Stop it right there,” before firing one fatal round from her AR-15 rifle into Showman’s chest. Showman was pronounced dead at a hospital less than two hours after making the 911 call.

The DA’s report concludes that Officer Okuma did not know the object was a drill and she had a reasonable fear for her life when she fired her weapon. Okuma reportedly told investigators that due to the urgency of the situation, she felt her Crisis Intervention Training (CIT) did not come into play.

Jim and Vickie Showman, Diana’s parents, emphatically disagreed with that conclusion in a phone interview Thursday.

“Okuma felt that the CIT training had no effect in this case, when in fact this is like a perfect case,” Jim Showman said.

Vickie Showman added, “It shows me the CIT training should be mandatory and ongoing, because law enforcement officers are inevitably going to encounter citizens in mental health crisis.”

This illustration lays out the scene of the shooting.

The DA’s report begins by recounting prior incidents the document Diana Showman’s mental instability. She tried to commit suicide multiple times, according to the report, and she also had violent encounters with family, which led her to stay at the Blossom Hill Road home of her father.

But the amount of time between the 911 call and when officers arrived at the home is a point of contention that the situation could have been handled differently, according to Steve Clark, the family’s attorney.

“When you reverse engineer this shooting, we never knew there was a 20-plus minute conversation by the dispatch with Diana,” Clark said. “We don’t see this as Officer Okuma describes as a rapid-fire, split-second situation.

“We see this as exactly the situation that needs to be diffused when you have a mental health crisis.”

Three of four civilian witnesses interviewed by the DA said they thought the drill was a gun, while the fourth said he thought it looked like a drill but wasn’t sure. 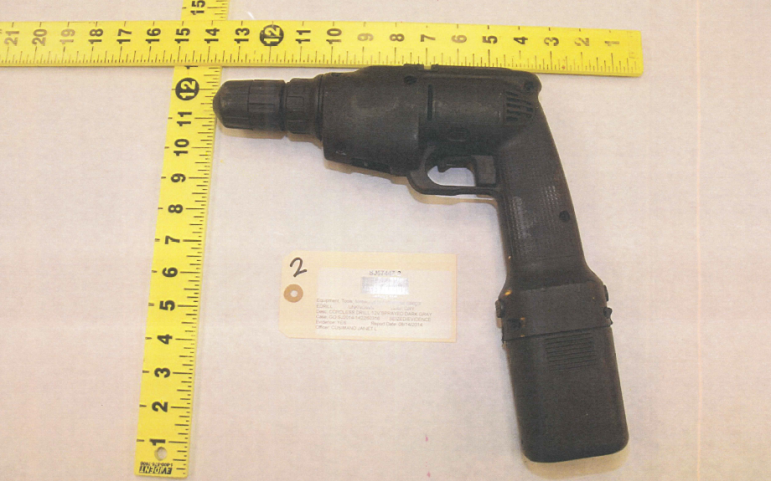 This is the drill Diana Showman held when she was shot. (Photo via DA report)

The Showmans told San Jose Inside that police repeatedly kept them in the dark the day of the shooting. Neither were at the scene of the incident, but both were taken in for questioning and had their cell phones confiscated during this time. Jim Showman called the police treatment “cruel,” saying officers failed to inform him his daughter had been pronounced dead for an extended period of time.

“It was horrible and insensitive,” said Clark, the family’s attorney. “There has to be better ways to interact with parents who are going through a crisis like this.”

The immediate handling of the crime scene also raises an issue.

The DA’s report notes that an officer kicked the drill away from Showman after she was shot and incapacitated. Officer Okuma then retrieved the drill and placed it in her patrol car, which was an unnecessary step in altering the crime scene, according to the SJPD Duty Manual. Sgt. James Mason confronted Okuma about where the drill went and retrieved it from her squad car before placing it back where he believed it had been kicked following the shooting.

The DA’s report does not follow up on why this occurred.

In addition to the immediate aftermath of the shooting, the Showmans also were outraged to learn that Okuma was sent by SJPD to represent the department at the funeral for two New York City police officers slain in the line of duty late last year. The Showmans considered the trip to be a kind of reward, just months after the officer shot and killed their daughter.

“It’s certainly insensitive, and it spoke volumes to us,” Jim Showman said. 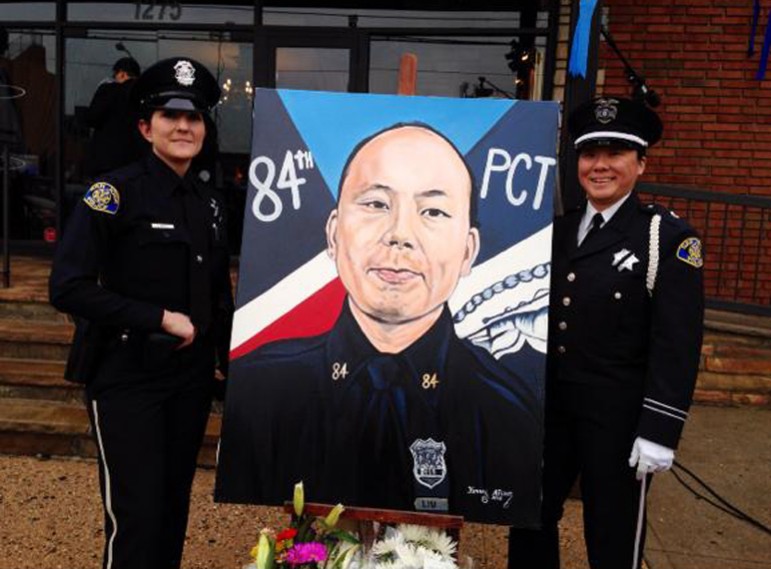 Sgt. Albert Morales, a public information officer for SJPD, said that Okuma serves on the department’s Honor Guard, which consists of about a dozen officers who attend funerals for fallen officers across the country. Okuma was one of three officers who volunteered to attend the NYC funerals, Morales said.

Jim and Vickie Showman say they will continue to push for “a truly independent civilian panel” to review officer-involved shootings. They support recent efforts by State Sen. Jim Beall, who has legislation moving forward that would require mandatory and ongoing crisis intervention training for state law enforcement.

“We want to support additional training for law enforcement so that other families don’t have to go through this,” Vickie Showman said.

The District Attorney’s office began publishing public reports on all officer-involved shootings in Santa Clara County in 2011. To date, no officer has been charged with a crime for firing their weapon.