Much of the district’s storied dysfunction traced back to the Alum Rock Three.

On many occasions over the past five years, experts and auditors accused the majority bloc on the five-member Alum Rock Union School District board of poor governance, conflicts of interest, enabling shady contractors and violating open-meetings laws. Under the troika’s reckless rule, the East San Jose elementary school district saw its credit rating downgraded and its fiscal independence revoked.

So, when voters ousted two-thirds of the faction—namely Khanh Tran and Esau Herrera—in the November 2018 election, parents and activists who spent years battling their divisive agenda breathed a collective sigh of relief.

“We were so happy to be able to move on,” said Flor De Leon-Jacobo, an Alum Rock parent and community organizer for the nonprofit Somos Mayfair. “That’s why, after the election, a group of us parents had a press conference to say that we wanted a policy to prevent board members from staying on for too long.”

But their effort to get ARUSD trustees to adopt two four-year term limits has been met with resistance. Ernesto Bejarano and Linda Chavez, the trustees who replaced Herrera and Tran, even seemed to vacillate on the issue, upsetting activists who say the candidates led them to believe they would champion term limits if elected.

Last fall, after about a year of relative calm, tensions at ARUSD’s monthly board meetings began to erupt once again in outbursts from the audience and impassioned denunciations during public comment. “It’s been getting pretty bad again,” De Leon-Jacobo lamented in a recent interview. “It’s not as bad as before, but the parents are getting frustrated and speaking out because they feel ignored.”

ARUSD’s most recent board session was no exception.

Scores of parents preceded the Feb. 13 meeting with a rally demanding that the district cap trustee tenure at two four-year terms. Clad in shirts emblazoned with the slogan “Challenge the System,” group held up signs declaring term limits “a long-term investment” and a way to “protect our tomorrow.”

“Even the president has term limits,” one poster read.

Outside the district offices on Gay Avenue, activist Andrea Portillo translated from Spanish to English statements written by ARUSD parents Alma Fajardo, Nain Lopez, Grabriela Cardoza and Araceli Sandoval. “Having no term limits has allowed people to hold office on this school board indefinitely and this has resulted in decades of poor governance for our schools,” she read into a megaphone.

Families involved in the grassroots term limits campaign have lost confidence in some trustees, she declared, because they feel that their pleas have fallen on deaf ears.

“Parents have lost confidence in some board members because we feel it is disrespectful and a bad governance practice to ignore the voice of the community, not listening to the requests and demands of parents,” Portillo said.

Portillo rattled off steps taken by the parent-activists over the past 15 months to prompt the board to consider their proposal, starting with a 2018 election forum in which Bejarano and Chavez said they stated in a questionnaire that they would support “term limits as a good governance policy.” She recounted how, over the ensuing months, the parent-led coalition—which calls itself Exigimos Madres y Padres Unidos por Justicia en La Educativa (EMPUJE)—struck up correspondence with each board member to pin down their stance on the issue and place it on the agenda.

It took until November to get trustees to oblige, and they still punted the matter without agreeing on how to move forward. On Dec. 12, EMPUJE presented the board with a pro-two-term-limit petition 550 names long. A month later, newly assigned board President Bejarano nixed the item from the agenda, prompting outrage from parents who interpreted the decision as an attempt to silence them.

“We are tired of people here making decisions and then ignoring us,” said EMPUJE member Dilza Gonzalez, whose children attend ARUSD schools.

This past week, Gonzalez and her allies finally made some headway.

Trustees expressed some reservation about the idea of two term limits. (Photo by Jennifer Wadsworth)

Weeks before Bejarano and Chavez won the 2018 election, they told attendees at a Somos Mayfair candidate forum that they, too, were open to instituting term limits. But when months passed without them advancing the issue, EMPUJE activists concluded that the pair must have changed their minds after taking office.

When the subject finally came up for discussion at the November board meeting, Bejarano, Corina Herrera-Loera and fellow trustee Andres Quintero voiced support for three four-year terms, if they pursue a ballot measure at all, because that would allow people elected to their position enough time to accumulate expertise. Chavez said she saw no need for any limits at all when the electorate can simply vote them out.

Surprisingly, it was Dolores Marquez-Frausto—the lone survivor of the Alum Rock Three—who espoused the strongest agreement with parents calling for an eight-year max.

When terms limits landed on the agenda again a few months later, on Feb. 13, she commended parents in the room for their tenacity.

“You have been very faithful in holding us accountable,” she conceded. “Nobody knows this more than me, who’s been here for three terms. But people have been putting me here, so I don’t know what to tell you.”

From the dais at the same meeting, Bejarano said it pains him to hear how some parents think he broke a promise made as a candidate two years ago. “Being a person of your word is core to everything,” he said. “But I also gave my word at that time that I would base my decisions on information. ... I stand by that.”

Still, he agreed with Herrera-Loera’s request to bring the issue back as an action item at the March 12 board meeting. Bejarano also asked the district to give them some information next month about how term limits have impacted similar districts.

De Leon Jacobo told trustees that if they take no action next month, then EMPUJE will take matters into its own hands by drumming up support to get a citizen initiative on the ballot instead. “Take a vote next month,” she urged. “Because we are tired. We are tired of continuing to advocate for term limits.”

In a phone call with San Jose Inside the next day, Bejaranos said he believes he’s been consistent—that the only thing he publicly committed to were term limits that “make sense.” And two four-year terms, he adds,  just don’t make sense to him.

But there’s a deeper question underlying the debate, he says, and that’s how trustees should strike a balance between their own informed judgment and the public’s demands.

“We were voted into this position based on our ability to govern,” he said. “And certainly, what we need to do is listen, but we also need to use our own experience, knowledge, education and look to experts for additional guidance. It can be hard to find a win-win.”

When he took his oath of office, he said he swore to serve the needs of the community and govern a district that’s not only trying to repair the damage inflicted by past administrations, but to brace for another year of budget shortfalls.

“We have a lot of difficult decisions to make,” Bejarano said. “But the end of the day, it’s about what’s good for the children and families in our district—and sometimes that doesn’t 100 percent line up with what the community’s passions are.”

Herrera-Loera said she appreciates Bejarano putting serious thought into term limits but wants to see a resolution on the issue sooner rather than later. “We need to keep up the momentum,” she told San Jose Inside, “or people are going to feel like we’re not listening. We need to give the community some sense of closure.”

Before her February 2019 appointment as trustee to fill a vacancy, Herrera-Loera said she was one of those parents who felt ignored.

“I know where they’re coming from,” she said. “So for me, the most important piece of this is to remember that we all want to feel heard, understood and respected.”

Though ARUSD meetings have become a little more restive these past few months, Herrera-Loera feels that they’re nowhere near as turbulent as they were under the last board majority. Overall, she said, things are getting better.

“I’m really excited about where we’re at,” she went on to say. “It’s now a year since I was sworn in and people were like, ‘Are you crazy? Why would you join that board at that district with those audits and deficits and hard times?’”

One reason, she told them, is to help mend what’s broken.

“The reality of that history is something that is going to make things difficult,” Herrera-Loera said. “As members of the board now, we have to acknowledge that and not take things personally. That’s part of our healing.” 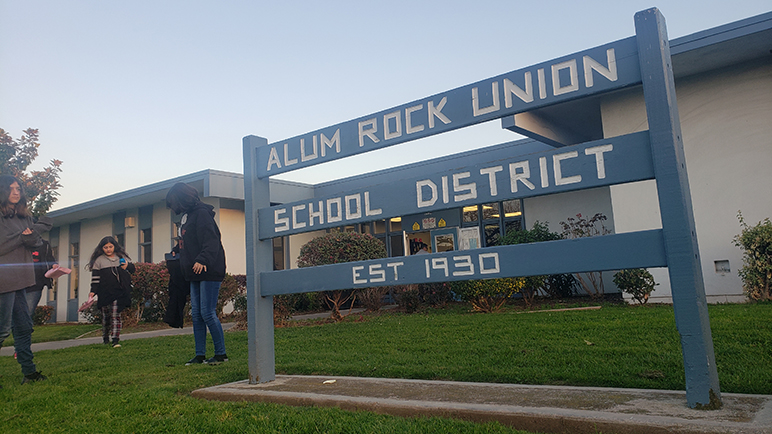 ARUSD is still trying to heal from its long, storied history of dysfunctional governance. (Photo by Jennifer Wadsworth)