For Palo Alto’s elected leaders, the talking points were enough.

In a bulleted cascade of rebuttals, Downtown Streets Team (DST) board member Owen Byrd denied and downplayed claims that the nonprofit enabled heavy drinking, sexual misconduct, harassment and discrimination in the workplace. His Dec. 18 memo—submitted to the City Council a week after San Jose Inside published records and personal accounts of rampant dysfunction at the homeless services provider—painted the allegations as “greatly exaggerated” by ex-employees with an ax to grind.

As with so many other local public agencies that contract with DST, no one on the Palo Alto City Council demanded primary sources to corroborate the company line—even after the hometown paper verified SJI’s reporting with a story of its own. Instead, the holidays came and went, and DST and its many municipal funders returned to business as usual.

On March 5, with a little persistence and some pointed questions, an obscure ad hoc committee tasked with reviewing federal block grants managed to give taxpayers more transparency than the council bothered to provide. Despite repeated protestations from city staff about being out of bounds, the three-member subcommittee of the Human Relations Commission got DST Executive Director Eileen Richardson to address the allegations for the first time in a public setting. 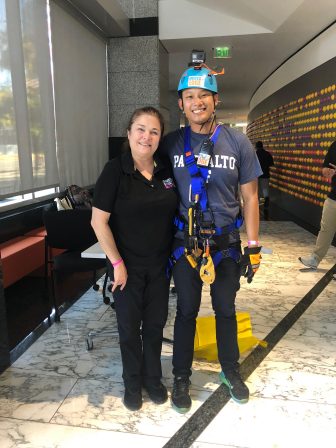 Eileen Richardson (from left) and Steven Lee at a Downtown Streets Team Downtown Drop Down fundraiser. (Photo via Facebook)

Though Richardson flatly rejected claims that she was part of the problems described by former subordinates, she volunteered to give the city never-before-disclosed records to alleviate public concern. Commissioners Steven Lee and Patricia Regehr incorporated her offer into a recommendation that the city grant DST $336,400 in workforce development funds on condition that Richardson makes good on her promise.

Lee—a corporate attorney by trade and longtime supporter of DST—applauded Richardson’s willingness to talk about such difficult allegations, calling it “a tremendous show of good faith to the community.”

While some of Richardson’s denials are disputed by records and recollection from her accusers, the nonprofit executive acknowledged that the fast-paced, tight-knit culture of DST’s early years may have been problematic for some people.

“I come from 15 years in high technology, where you work your tail off,” she told them, visibly fighting back emotion. “And I come from very small companies—startups, always. So, the culture there is you’re working 24-7 next to each other all the time and you become very friendly and hard-working and really passionate about changing the world.”

That culture worked “extremely well” in the beginning, she said.

“We would not be here had we not done that,” Richardson asserted.

When DST grew from a handful of employees to scores of them in 2012 and onward, she said she tried to maintain the closeness and intensity of the work environment.

“But by the time you get to 50 employees, though, boy, you need—as we have—an HR director and an HR employee handbook this size,” she said, miming its amplitude. “And part of it is that, well, you can’t work as hard as we did. But that’s OK. The law’s the law.”

As the organization evolved from fledgling startup to $8 million-a-year nonprofit juggernaut, Richardson said, she outsourced accounting to the Health Trust and personnel relations to HR firms Insperity and TriNet.

“So we really thought that we had the best of the best HR,” she told the committee. “Turned out the employees felt like the hotline to call whenever they had an issue wouldn’t have been as good as having an HR director. So that’s why we have somebody on-site all the time now so that we do have an HR director. We also have something set where any employee at Downtown Streets Team can call any board member anytime they want about anything that’s happening.”

Lee thanked her for sharing her side of the story.

“I really appreciate you being forthcoming, and I see the emotion and … I know it’s tough …,” he said, trailing off.

Richardson then broke down in tears.

“I’m just so sorry that all the hard work we’ve done is stained in this way,” she said.

“No, no, no,” Regehr chimed in. “I think, my perspective is that what you do, what Downtown Streets does is wonderful. And it’s not that it’s stained, but that you have made improvements. It’s more that I—it’s a lot of money … and when it’s a lot of money, as a community member … we need to see how everybody is being treated.”

“This is why transparency and discussion are so vital,” he said. “And my philosophy on the commission is that … I never want us to be afraid of asking tough questions and having tough discussions because the alternative of that is not having the information we need or he said-she said speculation. … This should be a lesson in not being afraid to have a discussion, because the discussion itself yields fruit.”

Richardson nodded affirmatively throughout their statements.

The subcommittee’s motion for conditional funding upset city officials for rocking the boat—and potentially setting up the council to defy advice from the Human Relations Commission. And it upset some of Richardson’s accusers for not going far enough.

The day before the March 5 meeting, Zia MacWilliams and Michelle Fox Wiles—two women who led the charge in getting DST to conduct an internal investigation—wrote letters urging the city to deny funding unless the nonprofit replaces Richardson and her son, Director of Program Operations Chris Richardson.

“Coming forward was incredibly hard, and my request to this commission is even harder,” MacWilliams wrote. “Please set strict transparency requirements for DST moving forward. Please show me that my words have value, and that this terrible and never-ending experience has had impact. Please, hold DST leadership responsible for their actions, as an organization created and based in the great city of Palo Alto, as I truly believe that a city is only as strong as the people and organizations it is composed of.”

In her own missive, Wiles rebuked the city for its inaction.

“What I can’t square is who you’re allowing to lead this charge and not be held accountable,” she wrote. “There have been multiple corroborated stories of sexual harassment, a frat like drinking culture, wage discrimination, and more. This has been done under your watch, with your money. Imagine what good that money could do if there was a leadership change?”

The subcommittee’s March 5 motion was set to go before the Human Relations Commission on Thursday, but the city decided this afternoon to cancel it in response to the coronavirus outbreak. The city has yet to announce a new date for the meeting.