The 32-year-old mother of three had recently volunteered to chair an advisory board for the Community Child Care Council of Santa Clara County. The nonprofit known as 4Cs channels about $43 million a year in taxpayer money to provide child care for thousands of low-income kids, including hundreds of toddlers and infants enrolled in federally funded Early Head Start programs. Curiel signed up for the parent-led 4C Early Head Start Policy Council last fall, she says, to learn more about the agency tasked with caring for her youngest child, year-and-a-half-old Rosa.

So when Lynda Ledo, the interim director of 4Cs’ Early Head Start programs, summoned her to the agency’s north San Jose office on Feb. 13, Curiel gladly showed up with her daughters in tow.

“I thought they were going to train me,” she says, “or maybe talk about the meeting scheduled for that night.”

Instead, Curiel says she was berated, threatened and shouted down by the organization’s board president, Ben Menor, as Ledo sat silently by.

Curiel says he demanded to know more about a memo ostensibly penned on behalf of the policy council, which raised concerns about Menor’s checkered past and the need for greater transparency. The Feb. 4 letter also called for an outside firm to recruit an executive director with experience in early childhood care and education—something Menor’s handpicked pro tem, retired FBI agent and close friend Joe Manarang, admittedly lacks.

“Ben just attacked me,” Curiel recalls. “He intimidated me, saying he could take legal action against me and started to use words that I didn’t understand.”

She began shaking, she says, and broke down in tears in front of her daughters. Curiel quit a few days later.

“I feel I was misled to go to the meeting and mistreated,” she wrote to the 4Cs board in a Feb. 16 letter that was also forwarded to the Early Head Start San Francisco office. “This should not happen to anyone else and I hope something can be done about this.”

Something is being done, apparently, though it’s too late to change Curiel’s mind about her resignation. The U.S. Department of Health and Human Services (HHS), which oversees Early Head Start nationwide and grants roughly $3 million a year for 4Cs to run the Santa Clara County program, confirmed that it’s investigating the harassment claims.

“[We] take these allegations seriously,” HHS spokeswoman Victoria Palmer wrote in an email. “Our office has been in in contact with the full [4Cs] board in regard to the allegations. After the Office of Head Start has an opportunity to assess the claims, our regional office will determine an appropriate course of action.”

HHS is also looking into charges that 4Cs ran afoul of federal grant conditions by obstructing the parent-led policy council and by failing to adequately train its volunteer members. According to the HHS subsidiary Administration for Children and Families, 4Cs and any other grantee must maintain an agency-level policy council and a delegate-level council to oversee Early Head Start programs.

Per HHS rules, the council must also approve personnel policies and employment decisions, including standards of conduct for program staff, contractors and volunteers and criteria for hiring and termination. Councilors must also approve salaries and performance reviews for the executive director, Early Head Start director, personnel director, chief fiscal officer and other equivalent positions.

It appears that 4Cs failed to grant the policy council its legally entitled powers and oversight. It also appears that it failed to provide orientations or training to members, who had no idea about the extent of their authority as councilors. 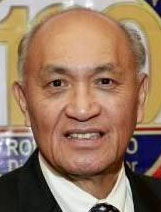 Incidentally, 4Cs managers summoned staff Tuesday morning for a 36-slide presentation about the role of the Early Head Start governing board and policy council. Manarang downplayed the meeting as routine, but it’s worth noting that it took place only after officials from Early Head Start began investigating 4Cs’ grant compliance.

As for the interrogation described by Curiel, Menor disputes her characterization. He says he was only trying to help by explaining her responsibilities on the council, which seems a tacit admission of 4Cs’ failure to adequately train its policy councilors. He says he also doubts that she or anyone else on the council wrote or even understood the Feb. 4 letter that brought up Menor’s past and Manarang’s credentials.

“If you meet these mothers, barely struggling to survive, barely knowledgeable with our language, it would amaze you that they would come up with such a demand letter,” Menor says, touting his own proficiency in the “pedagogy of the oppressed.”

“They’re wonderful people, but they’re not at the caliber of you and I,” Menor says. Later, he adds: “There’s a game being played and they’re being pawned.”

When told those statements might come off as condescending, he scoffs.

Curiel acknowledges that someone else wrote the missive. She doesn’t know who, exactly, but says she signed it anyway because it raised good points.

“When I first saw it, I’m going, ‘My gosh, who wrote this thing?’” he says. “It’s got very nice syntax, proper grammatical structure, college-level English.”

Manarang says he suspects that an ex-employee or liaison must’ve typed it up. Whoever it was wants “to disrupt” 4Cs, he says. He also refuses to address the substance of the letter, saying its mysterious provenance invalidates whatever message it tried to convey.

The board president’s alleged intimidation of Curiel is the latest black eye for an agency that’s in the midst of several audits, including one ordered by California’s Joint Legislative Audit Committee. The results of the state probe are expected sometime next month and may shed light on the 46-year-old 4C Council’s decline these past few years.

In fall of 2015, 4Cs shuttered an East Side preschool with little notice, leaving families in the lurch at the start of a school year. It closed its remaining five centers last spring under pressure from the California Department of Education, which grants the vast majority of 4Cs’ funding, to salvage the rest of its programs.

The nonprofit’s deteriorating financial condition has prompted alarm in Sacramento and raised enough concern for the city of San Jose to pull grants for senior meals. The county Board of Supervisors, for its part, has been talking about finding another operator or assuming responsibility for subsidized child care services altogether, which would cost the county an estimated $27 million a year on top of some $42.5 million in state funding.

Meanwhile, 4Cs management has been battling employees who are trying to unionize, dragging negotiations into nearly a third year. After one of those employees, Mario Del Castillo, lost his job in what looked a lot like a retaliatory firing, he joined his former colleagues in a federal lawsuit claiming that 4Cs mishandled workers’ pensions.

Alfredo Villaseñor, the 4Cs executive director for more than four decades, jumped ship last summer, which gave the board a chance to find a new captain to correct course. Instead, sources at 4Cs say Menor sidestepped standard hiring practices and appointed his friend, Manarang, as interim replacement.

While the new acting director apparently led a distinguished career in federal law enforcement, letters signed by the 4Cs policy council say parents would rather have a leader with academic credentials and work experience focused specifically on early childhood education.

The correspondence to federal regulators also expressed concern about the level of involvement from Menor, whose misuse of $219,000 in taxpayer money and alleged fraud drove another nonprofit, the Northside Community Center, into the ground more than a decade ago. History repeated itself last year, when 4Cs relinquished a preschool program at the very same community center because of management failures.

Menor—whose side job involves training people in nonprofit governance—acknowledged that he’s been spending up to six hours a day at 4Cs’ main office. That’s an unusual time commitment from a volunteer board president, and a potential conflict with federal policy that requires trustees to operate independently from the organization they’re appointed to govern. 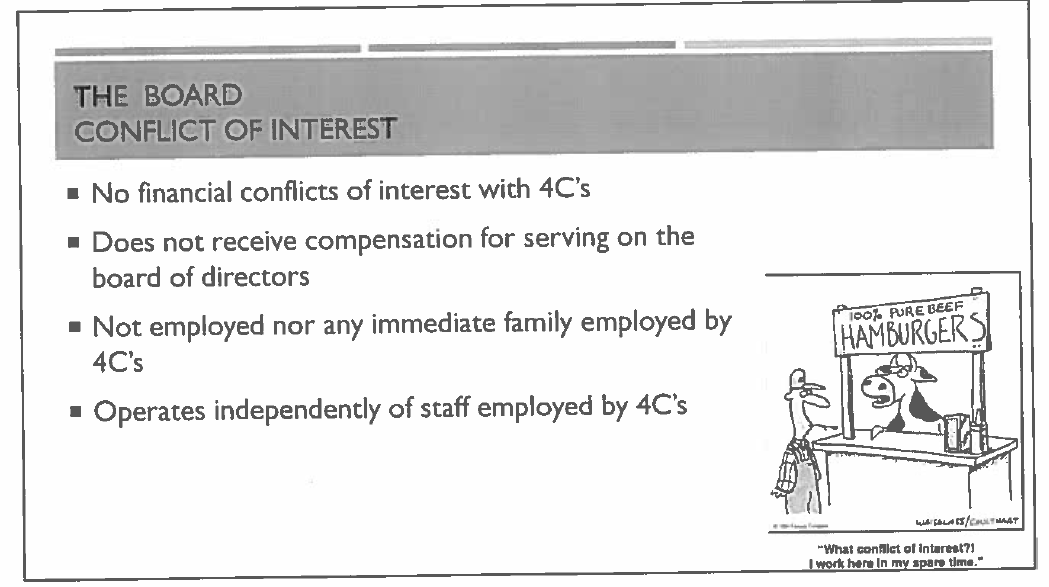 A slide from the March 27 training 4Cs gave staff on its governance policies.

But when the policy council raised those issues earlier this year, Menor responded with a closed-door interrogation, parents say. What’s more, according to a letter to federal authorities, Menor then “obstructed and sabotaged” the council by ignoring requests to agendize a discussion about recruiting a new 4Cs director and to hold the Feb. 13 session at an East Side location more accessible to parents instead of the 4Cs office.

As a result, all but two of the council members showed up to the alternate site, and the one at the 4Cs headquarters was canceled for lack of a quorum. Ledo then sent out a letter to the parents who showed up at the East Side location asking them to sign a form reaffirming their interest in serving on the council. Failure to respond would be considered a resignation, she wrote in the March 1 email.

The parent council, or someone working on its behalf, reported the events to Early Head Start officials in a March 6 letter that accused Menor of retaliation.

“It appears that [to Menor and Manarang], threats and intimidations are a clear message to all policy council parents that if they do not ‘behave’ there will be legal action against them so they will become fearful and possibly withdraw or resign from the policy council,” the letter read.

The letter’s author, or authors, also cautioned that a failure to act could allow Menor to appoint Manarang as permanent director without a competitive hiring process or open discussion. It ends with a plea for “urgent intervention.”

“I volunteered thinking that it was going to be something good for me, for my family, for my kids,” she says. “I want to get better as a mother, I want to have a better education and a better opportunity for my daughters.”

But Curiel says her personal life is demanding enough without adding another stressor.