Just months before his graduation from Archbishop Mitty High last year, Miles Lawson showed up to campus with a freshly braided head of hair. According to Lawson, not two days passed before a school dean asked that he remove them.

The administrator’s rationale, as Lawson recalls, was that the traditionally African-American style was not something “we’re trying to push for at the school.”

“It didn’t fit the ‘Mitty aesthetic,’” says Lawson, who ranked among the 3.5 percent of pupils comprising the institution’s black student population.

Yabsera Grum, one of Lawson’s classmates, says that while school officials never went so far as to ask her to take her own braids out, she experienced similarly troubling treatment. After hearing about what happened to Lawson, Grum says she marched into the dean’s office with a friend to voice their concern.

Rather than hearing them out, Grum says the dean came off as defensive—hostile, even. Grum says he told them he only meant to help Lawson, “that the kid was embarrassed of his hair and he was encouraging him to fix it,” she says. “That was his point of view of what happened.”

The school’s officials didn’t return our requests for comment by press time. But its policy speaks volumes. And, at least as of last month, it may very well violate state law.

In her meeting with the dean last spring, Grum came armed with a copy of the Archbishop Mitty dress code, which included a ban on students wearing their hair more than four inches from their scalp. While ostensibly penned to discourage mohawks, Grum says it’s undeniably discriminatory toward students of color.

She says the dean claimed he would determine if it would be “necessary” to change it. And a year later, the school policy has actually regressed. Mitty’s website clearly states, “natural hair that stands out from the head more than three inches” is not allowed. Over the last year, then, a whole inch has been taken off the length of “permitted” natural hair.

It’s that sort of policy which the newly enacted Crown Act aims to prevent.

With the Crown Act—an acronym that stands for Create a Respectful and Open Workplace for Natural hair—California became the first state in the union to enact such a standard. New York has since followed suit, passing its own version just weeks after SB 188 became law on the opposite coast.

Specifically, the Crown Act expands definitions of race-based discrimination in the California Education Code and Fair Employment Housing Act to include traits historically associated with race—traits including, but not limited to, hair texture and styles such as braids, locks and twists.

The language of the bill explains how American history has been “riddled with laws and societal norms that equated ‘blackness’ and the associated physical traits, for example, dark skin, kinky and curly hair to a badge of inferiority, sometimes subject to separate and unequal treatment.”

The landmark legislation adds to a growing body of laws, rules and administrative guidance about dress codes and grooming standards. Employers trying to create an “image” or “brand” must carefully consider the legal protections afforded to workers. If the rules have a disparate impact on a protected class—age, gender, religion, race or national origin—it could be considered illegal.

For example, according to case law, companies that require men to be clean-shaven could be held liable because African-American men are more likely to have a skin condition called pseudofolliculitis barbae that’s inflamed by razors. The Crown Act takes that idea a step further by enshrining hairstyles and hair texture in California’s statutory definition of racial discrimination.

Traditional black hairdos trace back to the earliest human history and the most influential ancient civilizations, including ancient Egypt. A bust of 13th-century BCE Queen Nefertiti was rediscovered in 1913 sporting a sky-high hairdo; braids emerged in African grooming practices as early as 3500 BCE, signifying various social statuses and life stages. Cornrow designs were used by slaves in the U.S. to map out escape routes.

San Jose’s culturally diverse Alum Rock neighborhood has its very own Queen of the Nile in Gwendolyn Neal, who opened Nefertiti Beauty and Hair Salon in 1993 and only retired this past May. When she opened her business, she says, the closest stores that really catered to African-American beauty were 50 miles north in Oakland and San Francisco.

Morrow recalls it was more or less after the Civil Rights movement—once people of color were entering the workforce without legal segregation—that black Americans started experiencing discrimination based on less overt barriers to advancement such as natural black hairstyles. “That definitely was not one of the main looks in corporate America,” says Morrow, with a chuckle. Albeit, she adds, “It was alright on the assembly lines.”

From the 1970s through the 2000s, Morrow’s clients busted their locks to achieve styles that fit within exclusionary Anglo definitions of beauty. “I’ve had men and women that do certain things to their hair, and they can’t go to work like that, so they’d buy wigs and wear wigs to work to be accepted at their jobs,” Morrow says.

Jasmin Oliver, the newly appointed salon manager at Nefertiti, says her family can relate. Her husband, who works at a wireless retailer, was promoted twice in 2017—but each time on condition that he change his hair, which he’d worn in dreads for years. At first, he was asked to change the color because his dreads were dyed at the tip. So, Oliver dyed her husband’s hair completely black. The second promotion entailed assuming more of a face-of-the-company persona—so they asked him to cut the dreads off entirely. To the Olivers, the underlying message was clear: Your hairstyle isn’t welcome here.

“A little bit is allowed, but not this. You want to be in this position? You have look like this,” Oliver says, explaining the mandate. “Well, why can’t I be in this position and look the way that I want to look? Because I’m still going to be able to deliver everything that you ask me to do. You see something in me; you just don’t like the way I look.”

Clearly, black hair isn’t just an aesthetic. “Embracing the natural hair is like a statement of the mind,” Nefertiti founder Neal says. Thankfully, the law has affirmed as much by linking hairstyles to a deeper sense of identity. 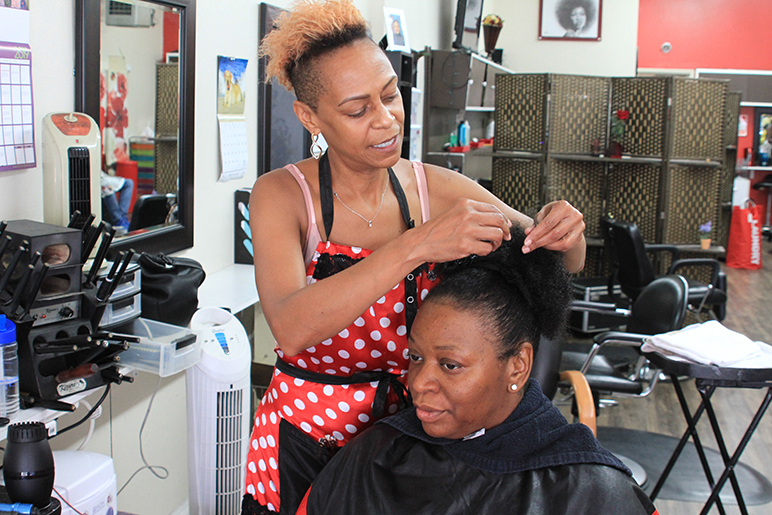