Teresa Brillante left a nursing job in the Philippines to find a better-paying opportunity in Sunnyvale. “I was looking for a greener pasture,” she said.

But the US was still reeling from economic recession in 2010. Good jobs were hard to come by for virtually anyone, let alone an undocumented immigrant. Brillante made due.

She found minimum-wage work as a caregiver at a senior home, where she would spend 12-hour night shifts attending to a client with advanced dementia. The facility never paid her for overtime, she said, and forbade her from taking breaks.

After two years, she had enough.

Together with a coworker, Brillante began gearing up to file a wage theft claim. But she feared her boss would retaliate by threatening her with a consequence she dreaded for years: deportation. “The employer mentioned [my immigration status] to my lawyer,” Brillante said. “My lawyer’s response was, ‘You know better. When there’s a claim for wage theft, that’s insignificant— undocumented or not.’”

Brillante’s story is, unfortunately, a dime a dozen in Silicon Valley, where wage theft is an epidemic. After a 2015 study found that Santa Clara County saw the highest per-capita rate of wage theft claims in all of California, the Board of Supervisors responded by establishing a division dedicated to combating the trend.

A few years ago, the county’s Office of Labor Standards Enforcement (OLSE) began collecting data on wage theft. Earlier this month, it hired Brillante as a community outreach worker to help people who find themselves in the kind of situation she’d been through. And just this week, the OLSE, which boasts being the only county-run office of its kind, finally opened its doors to the public.

While the OLSE focuses on helping all service workers, it took the occasion of its grand opening press conference Monday to highlight a new enforcement program that takes aim at the restaurant industry. Outside LUNA Mexican Kitchen on The Alameda, which officials held up as an example of a responsible employer, OLSE Director Betty Duong described how her division’s new enforcement initiative enables the county to revoke permits for restaurants with outstanding wage theft judgments.

Countywide, restaurants owe nearly $5 million in back wages to workers, according to  Duong. And one alone accounts for 149 unique wage theft judgments. 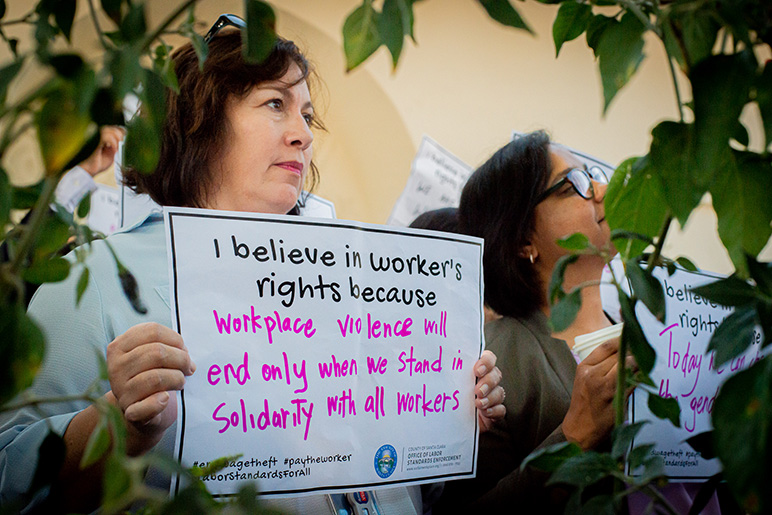 County Supervisor Dave Cortese joined Duong in applauding the new policy. “Even in my first term here on the Board of Supervisors, we were getting reports of businesses that were coercing, even extorting employees to work beyond breaks and eight-hour work days, and under oppressive circumstances,” he said, “on the basis that if they didn’t, they would be fired and, if they were undocumented, they would be deported.”

Duong stressed, however, that the goal of the enforcement crackdown isn’t to shutter businesses. It’s to bring them into compliance.

Initially, the county will focus enforcement on Sunnyvale, Mountain View and the 95112 and 95113 ZIP codes in San Jose. But the goal is to expand that reach countywide.

Santa Clara University law professor Ruth Silver-Taube, who leads a regional wage-theft task force, commended OLSE for the effort. “We have been advocating for this restaurant permit revocation program for four years,” said Silver-Taube, who’s coordinating a new multilingual OLSE hotline for workers seeking legal advice. “There’s a culture of non-compliance. Employers just don’t pay judgements. I did a public records act requests. There were pages and pages and pages of unpaid judgements. ”

But “nothing really happens,” she lamented. Even though the California Labor Commission has a judgement enforcement unit, there are simply too many cases to keep up with. After all, it handles almost 300 enforcement claims a month. Hopefully, she said, the OLSE’s latest initiative will whip the food industry into shape.

“We must give a voice to these employees, helping them collect the wages they are owed, which they earned through hard, honest work,” county Supervisor Cindy Chavez told reporters outside LUNA on Monday.

For Brillante, it was the Filipino Association of Workers and Immigrants that gave her a voice years ago. The advocacy group offered legal help and, most importantly, gave her the confidence to go through with filing a claim and winning the money she earned.

Now, thanks to $1 million the county allocated to educate workers on labor laws, Brillante will pay it forward as an outreach worker for OLSE. After all, she knows exactly what it’s like to get cheated by someone in a position of power. “I know that feeling,” she said, “that fear—as an undocumented worker.”

She also knows what it’s like to overcome it. Now an American citizen, Brillante hopes to become a nurse again once she graduates from Mission College. Her long-foregone dream now feels within reach. 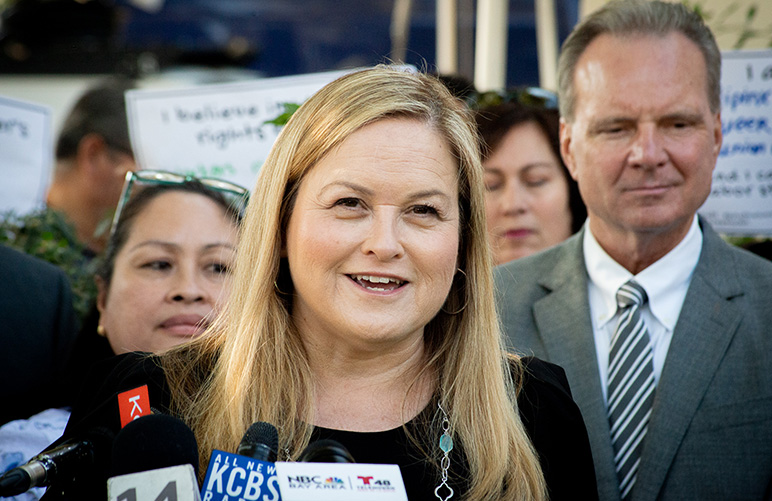