Monday marked the 99th anniversary of women’s right to vote.

“They fought. They marched. They did so much to demand and insist that it happen not only for women, but for the United States of America,” Pelosi told the audience at the event hosted by the Silicon Valley Leadership Group. “It’s so important for women to have the confidence and courage to go out there and just jump into the arena.”

Congresswoman Anna Eshoo (D-Palo Alto) echoed Pelosi’s sentiments. “We have to go back a ways and understand the struggle that took place almost half a century to convince lawmakers that women deserve a vote—that we could be trusted to vote,” she said.

The venue where the event took place served as a reminder of how far the nation has progressed since the advent of women’s suffrage. And how far it has yet to come.

Soon enough, NASA Administrator Jim Bridenstine promised, the first woman may land on the moon. The NASA official took the occasion this week to talk about NASA’s latest mission—the Artemis Exploration program, which plans to send the first woman and the next man on the moon’s South Pole by 2024.

“The first person to walk on Mars may be a woman,” Bridenstine said.

Artemis 1 will launch in 2020 with an un-crewed flight for testing. Artemis 2 will fly with crew in 2022. And Artemis 3 will fly in 2024 to land astronauts on the moon. The program will use a new rocket system called the Space Launch System, a system that will send astronauts on the Orion spacecraft. Astronauts will then dock Orion at the spaceship Gateway, where there will be living quarters and a lab for research.

“Artemis is critically important for our country and the world,” Bridenstine explained. “This time we go to the moon, we will go sustainably. We will go with international partners. We will utilize the resources of the moon.”

The project, however, faces funding shortfalls and political uncertainty. The $30 billion it would cost to see it to completion has yet to be budgeted.

At least the moon landing has bipartisan backing, Eshoo told the Mercury News in an interview at the event, promising her own unwavering support.

“We are poised and ready,” she said, according to the news article, “and we’re going to celebrate the first woman landing on the moon in a handful of years.” 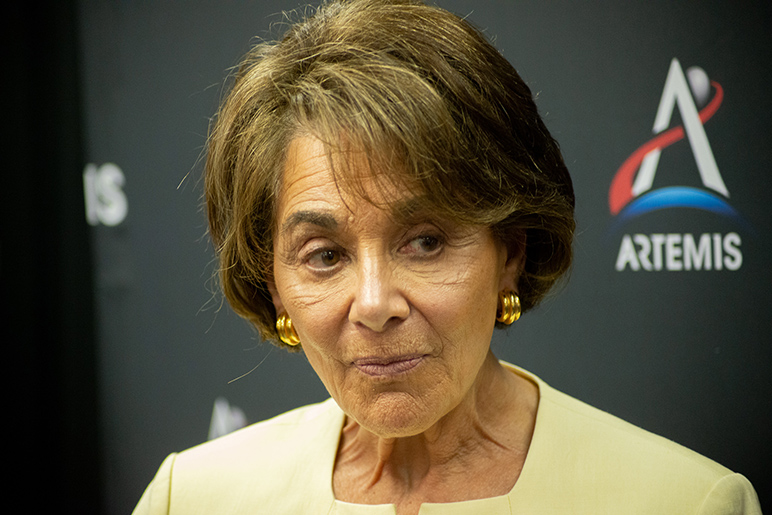