AnnaLisa Wilson measures her material casualties—furniture, textbooks, clothing, CDs, vinyl—in the thousands. By her last tally, she counts $5,873 worth of belongings wiped out by the February flood that bombarded her family home in Rock Springs, a working-class neighborhood in the heart of San Jose.

The intangible harm is harder to compute.

The med school student lost her awards from the Guinness Book of World Records for being part of a team that in 2003 read Dr. Martin Luther King Jr.’s “I have a Dream” speech aloud for 74 hours, 49 minutes and 37 seconds. She lost her personal library, including medical literature and books she was gifted or bought during her coming-of-age period as an aspiring doctor. She lost souvenirs sent by friends from India, China and West Africa. She lost pictures she drew for her mom, a schoolteacher also displaced by the Feb. 21 and 22 Coyote Creek flood.

Most of all, Wilson said, she lost her sense of safety.

“Everything was ruined,” she wrote to the city of San Jose in a claim for damages. “You successfully erased 33 years of my life. You want me to calculate my losses? You couldn’t even replace what I lost. I lost all trust in local government to do their jobs. I lost awards and items that have far more sentimental value than what you could ever quantify.”

Wilson and her mother—66-year-old Juanita Wilson—are among several flood victims who filed claims against local agencies for failing to protect them from rising waters that displaced hundreds of households and forced thousands of emergency evacuations.

A group of flood victims will hold a press conference at 11am today to announce their claims against the city, the Santa Clara Valley Water District and Santa Clara County. Each agency failed in some way, according to retired attorney Ted Smith and still-active attorney Amanda Hawes—a husband-and-wife team helping victims file claims.

Some of the allegations blame the county for failing to notify people about the impending threat through its federally supported Integrated Public Alert and Warning System (IPAWS). Even a heads-up of a few hours could have given people time to save their personal belongings or drive their cars to higher ground, victims say.

Rock Springs residents Dulce Mata and Saul Guzman say they had to hole up for a month with their three children—including an infant—in an emergency shelter at Seven Trees Community Center, where they were exposed to sexual harassment and sickness.

“As far as I could tell, [infant] Said was the only newborn at the Seven Trees Shelter and there were many people there who were coughing a lot, sneezing or showing other signs of being sick,” Mata wrote. “It was a big concern to me as a new mother [that] my baby might be exposed to infection that could be hard to fight off.”

When her baby developed a sore on his tongue, a doctor urged Catholic Charities to relocate the family to Casa Linda Motel. The relocation presented its own problems.

“Shortly after my baby and I moved to Casa Linda Motel, a stranger came right up to me and asked me what I charged for sex,” Mata stated. “I was scared and horrified as I realized that some of the occupants of Casa Linda Motel were prostitutes and that the city and the agencies responsible for housing of flood victims had sent me and a 2-month-old baby to live where soliciting prostitution was taking place openly.”

After the second night, Mata returned to the Seven Trees shelter.

According to other victims, the city failed to issue evacuation orders despite knowing days ahead of time that the Anderson Dam neared the brink. Every time the reservoir has spilled in the past, Rock Springs and other neighborhoods along mid-Coyote Creek have flooded. The city knew and should have acted, according to Rob and Renee Souza, who were flooded out of their home on East Williams Street.

“Our lives changed drastically during the February 2017 flood of the Coyote Creek,” the Souzas wrote. “We live right next to the creek … in an area that has flooded several times in the past few decades. The worst damages that we suffered was that our beautiful 100-year-old oak tree fell over due to the impact of the flood and crashed into our garage, completely destroying it.”

The damages surpassed $100,000, they said, and the Federal Emergency Management Agency (FEMA) has yet to compensate them for all their losses.

The water district—Silicon Valley’s chief flood protection agency—failed to use emergency measures such as reservoir pumps to keep the dam from spilling, according to other claimants. The district also failed to keep the river clear of vegetation that affected the flood capacity in certain parts of Coyote Creek, they added.

The water district’s Board of Directors Chairman John Varela says his agency will give each claim due consideration. “In the interim, I would like to say our hearts go out to everyone who was impacted by the flooding of Coyote Creek,” he says, adding that the “overwhelming amount of water that struck our community during a short period of time was of epic and historic proportions during the rainstorms in February.”

City officials did not respond to a request for comment, and the county merely acknowledged that the claims are being reviewed by counsel.

Smith and Hawes spent the day Wednesday filing the claims and sorting through paperwork in time for today’s presser. The couple is no stranger to David vs. Goliath legal battles. In 2003, the New York Times called them the “anti-power couple” for their legal fight against Silicon Valley tech companies leaching out toxic waste. 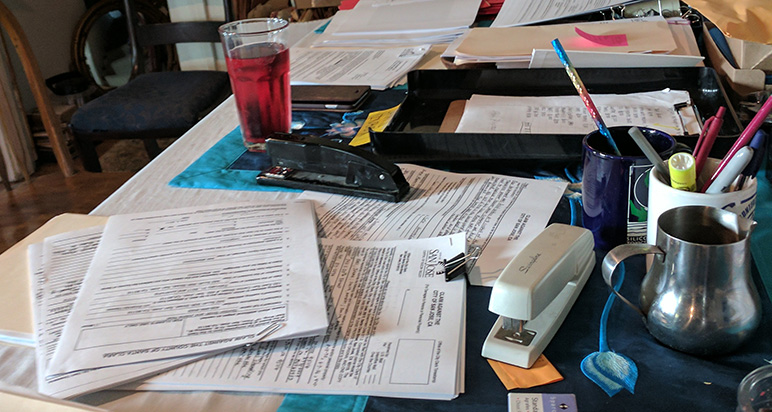 Copies of several claims clutter the dining room table of Ted Smith and Amanda Hawes, the former a retired attorney and the latter still practicing.

“Theirs is a marriage of common crusades against some of the region’s biggest companies,” the reporter wrote.

That crusade against toxic pollution led to a crusade for the right to access information exchanged by public officials on private emails and mobile devices. Their lawsuit against the city of San Jose escalated to the state’s high court, resulting in a decision that deemed public information on private devices retrievable by formal information requests under the California Public Record Act.

Smith and Hawes got involved in the legal fight over the February flood because their son and his wife, Gordon Smith and Jolene Noel, were among the victims in the Naglee Park neighborhood. But their advocacy on behalf of immediate family quickly extended to the community at large. They contacted victims through clinics and resource fairs, collecting stories that became claims that could turn into litigation if the city, county and water district refuse to reach a universal settlement.

“You have to go through this process, as tedious as it is, to have any kind of recovery compensation,” Smith said Wednesday night, while scanning, copying and stapling paperwork on the dining room table in his old Naglee Park Victorian. “We’re trying to get all of these things filed by mid-August. We’re hoping that once [the agencies] have a chance to see this, they can assess potential liability and agree to a universal settlement. We’re doing the grunt work right now.”

“It’s not grunt work,” Hawes chimed in. “It’s going person to person to get the stories out there. It’s assembling the paperwork. It’s getting all of these things out there in time.”

Each story is heartbreaking, Hawes added.

“The chaos of leaving your home is hard to describe,” she said. “What if you were a heart patient and you had a heart attack? What if you have diabetes? I don’t think these are impacts that are being considered. Ultimately, none of this needed to happen.”

Her granddaughter, 10-year-old Roma Smith, wrote a heart-wrenching narrative in one of the claims. She described watching her parents, Gordon and Jolene, desperately trying to salvage their belongings and rescue their pets, a cat named Luna and a dog named Mochi. She described staying with her parents in one room after the flood while her own home sat waterlogged and disconnected from basic utilities.

Roma wondered if the lack of warning was part of a land grab, gentrification by disaster. If records show that each local agency knew about the threat days ahead of time, she asked, then why were so many people left to fend for themselves?

Intention aside, the effect has been traumatizing.

“Every day after the flood, I had to look at the level of water in [the] creek to make sure [the] level is low,” Roma wrote. “Now when I hear the word ‘drought’ it actually makes me feel safe.

“I don’t like rain at all anymore. I just wish it would never rain.”