A public memorial will be held Thursday at SAP Center to honor the life of Michael Johnson, the San Jose police officer killed last week in the line of duty. Several local businesses will also take part in honoring Johnson’s sacrifice by donating all sales to his family.

Every cent spent at both San Jose locations of the Britannia Arms pubs will go to Johnson’s widow. The Brit will host silent auctions and BBQ lunches and dinners at both the downtown and Almaden locations. Scramblz, a diner off of Alum Rock, will donate all sales rung up from 7am to 2pm that same day to the family.

Johnson, a 14-year veteran of SJPD, was shot and killed responding to a March 24 call about a drunk man armed with a rifle. When Johnson and his partner pulled up to the condo off of Senter Road, they were met with gunfire. Johnson was hit and pronounced dead on scene. He was 38.

A memorial of flowers, candles, photos and written condolences have grown outside of the police headquarters following Johnson’s death. A series of vigils were attended by community leaders and a cohort of Johnson’s colleagues.

Johnson’s death was the first in the line of duty for SJPD in 14 years and the 12th in the agency’s 166-yar history. Twenty-four-year-old rookie Jeffrey Fontana, a member of the same academy class as Johnson, was gunned down during a traffic stop in 2001.

“We are a city that is better for Officer Johnson’s selfless service,” Liccardo said Tuesday, inviting the public to attend the memorial. “I am grateful to all our men and women of the San Jose Police Department for their daily commitment to our great city.”

On Thursday, a motorcade will travel from Los Gatos and through Campbell to arrive at its destination at the SAP Center for the public memorial service. To view the procession route to and from the event Thursday, click here.

Two years ago, Santa Cruz mourned the loss of two officers at the same venue. Members of the Santa Cruz Police Department will join San Jose officers for the service, along with a host of high-profile dignitaries.

Bay Area law enforcement agencies, including the Santa Clara County Sheriff’s Office and the California Highway Patrol, will help San Jose with patrols and calls for service to give some of the city’s officers a chance to attend the memorial for their fallen colleague. 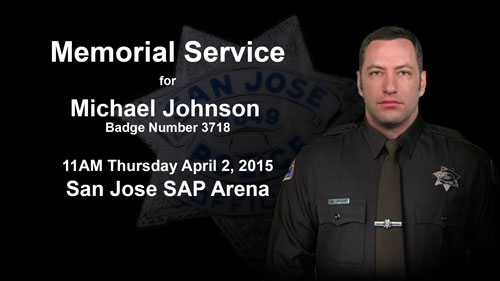