Prior to the 2016 election, Marni Rubin’s political experience consisted of dutifully voting Democrat. The 47-year-old San Carlos resident, a wine seller and educator by trade, expected to cast her ballot for the nation’s first female president and then go back to teaching classes through her company, Wine One One.

Instead, she found herself studying red state politics and gerrymandering in an effort to figure out how and why the country swung so hard to the right. “I quickly realized that to have my voice heard, I’d have to get involved in races outside of California,” she says.

“A lot of organizations were starting to work on flipping Congress, which is vital, of course, but Sister District stood out to me because it focused on the state-level races,” says Rubin, who helms the local chapter with Demetria Vong-Spillan. “It was really powerful to me, this idea that states really matter and that the state legislatures control a lot of things in our daily lives that are important to us, from affordable housing, to traffic, environmental issues and things that we can more directly influence.” 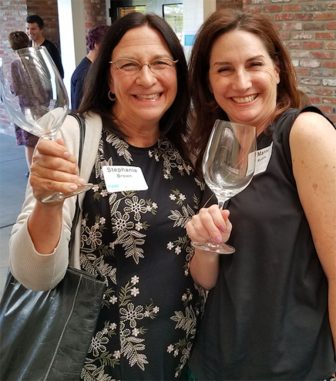 Stephanie Brown and Marni Rubin (from left) at a recent Sister District fundraiser in San Jose.

States have authority over redistricting and removing structural barriers such as voter ID laws, she says, which strengthen democracy in the long run.

Rubin joined the Sister District’s Peninsula chapter almost exactly a year ago and watched it sway the outcome in some of the most consequential state elections of 2017. Like similarly tech-focused grassroots organizations Flippable, MobilizeAmerica and Run for Something, Sister District equipped down-ballot campaigns with Silicon Valley data science and digital tools.

The result so far: across-the-board victories.

Fifteen of the 16 candidates the group supported last year won. The one Sister District candidate who lost was in a race that ended in a tie that officials resolved by literally pulling a name out of a hat. Thanks to the combined force of 25,000 volunteers who raised $350,000, made 81,000 phone calls, penned 40,000 postcards and knocked on 30,000 doors, Sister District helped flip the Virginia House of Delegates and state senates in Washington and Delaware.

In March, Bosworth—who hung up her attorney hat to lead Sister District full time—helped Rubin form the organization’s South Bay chapter, which hopes to continue that momentum into the 2018 midterm elections.

Democrats have a lot of ground to gain. The party lost about 1,000 state government seats in the past decade. And in 33 states, Republicans control both the state senate and assembly. In 25 states, the GOP controls the governorship and both legislative chambers—the trifecta. If Republicans took hold of just one more state house, they’d be able to call a constitutional convention to amend the supreme law of the land.

Dems, by comparison, have trifectas in just six states.

“I was struck by how out of balance that is,” says 59-year-old San Jose resident Stephanie Brown, a lifelong activist and career public relations specialist who’s handling communications for the South Bay Sister District chapter. “Of course I don’t want Democrats to rule the world, but I do want everyone at the table to have an opportunity to shape the future of our country and the future of our states, where gerrymandering is out of control to the point that elections are not equitable and not fair.”

The imbalance has had widespread repercussions, allowing Republicans propelled by the Tea Party-led backlash to America’s first black president to impose voter suppression laws and gerrymander their way to a safe lock on state legislatures. According to the Brennan Center for Justice, states with Republican trifectas have since churned out reactionary policies that impede access to abortions, undermine the civil right of queer and transgender people and tip the scales ever more against the working class.

“One of the starkest examples of our impact is in Washington, which showed how one candidate could change the political landscape,” Bosworth says.

In November, activist Manka Dhingra replaced a Republican in the Washington state senate, giving Democrats another trifecta. Freed from partisan deadlock, the blue wave led to the passage of a statewide automatic-voter-registration bill, which Gov. Jay Inslee signed into law on March 19, about a week after the state outlawed so-called gay conversion therapy.

Similar transformations have taken place across the map. Since Donald Trump moved into the White House, Dems have flipped 39 statehouse seats, including four in New Jersey and 15 in Virginia. Hopefully, Brown says, those shifts portend what she calls a “bubble up effect.”

“What’s great about this from a strategic point of view is that politicians become national politicians,” she says. “They run, they learn, and they often move on to national office, so those kinds of policy decisions eventually bubble up to D.C.” 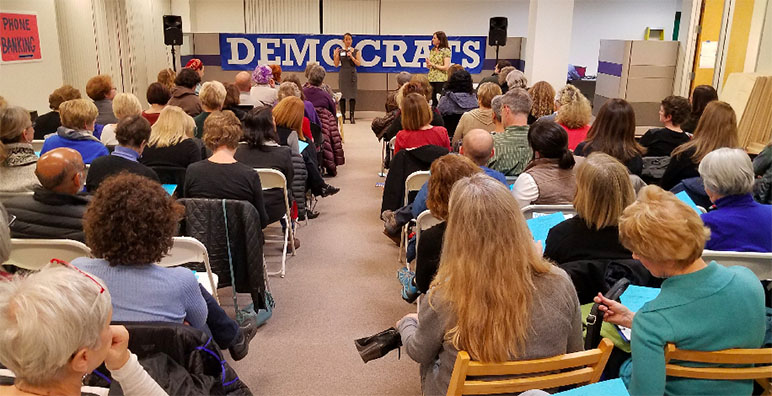 This year, Sister District will double the number of candidates it’s backing to 30—a quantitative drop in the bucket considering that 6,066 state legislative seats out of a nationwide total of 7,383 will appear on the November ballot. But Sister District has taken more interest in qualitative outcomes than the sheer number of upsets.

Tammy Story and Faith Winter, the two candidates paired up with the South Bay chapter, are running in Colorado, which is only a state senate seat away from becoming yet another a Democratic trifecta.

Back in Santa Clara County, Rubin will rally her troops to continue that trend this fall for Story and Winter by bridging the 1,200-miles distance with videoconferencing, text and phone banking and tapping into Silicon Valley’s enormous wealth to boost their campaign coffers. Some volunteers even plan to fly to their sister districts for some boots-on-the-ground canvassing.

That’s around the age Brown began developing own political awareness. Growing up with a print journalist father in Nevada taught her the power individual activists and candidates could wield in even statewide elections. But she lost that sense of impact when she moved to California to pursue her career in public relations.

“Everything here is so big and seems so disconnected from our daily lives that I would meet a lot more people who weren’t as politically involved or politically aware and felt like their vote really didn’t matter,” she says. “That really surprised me because I had grown up thinking that politics does matter.”

For Brown, the cross-country organizing undertaken through Sister District has made politics personal again.

“I was already participating in democracy at some level,” she says. “But Trump’s election woke up a lot of people, who started learning about how government worked and who used the Women’s March as a jumping-off point, a launch pad.”

Progressive groups like Indivisible began springing up, expanding her civic sphere and deepening her engagement.

“I kind of found my tribe,” she says.

WHAT: Wine, Art and Why State Legislature Matters to You
WHEN: 4pm May 6
COST: $75 per person, proceeds benefit Colorado candidates
WHERE: Los Gatos, exact address given three days before event
INFO: Click here to RSVP, or email [email protected]