At the Vatican this morning and before an audience that included Pope Francis, San Jose Mayor Sam Liccardo spoke about affordable housing as a solution to Silicon Valley's chasmic gap between rich and poor.

Liccardo told the gathering of mayors and leaders from around the world that the region's stark inequity comes down to a lack of affordable housing. He highlighted several efforts by the city to address homelessness, including motel conversions, micro-homes and job placement. 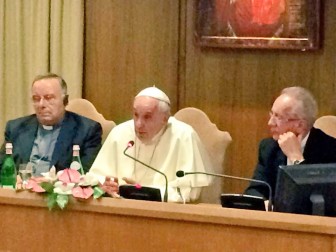 In an address live-streamed on the Vatican's YouTube channel, Liccardo shared the city's strategy of targeting the most vulnerable homeless residents: the ones who cycle in and out of jails, hospitals and social services with the most frequency. By focusing on the chronically homeless, he said, local governments can free up public resources for everyone else.

Liccardo was one of about 60 mayors from around the world invited to speak at the Vatican this week for a workshop on climate change, sustainable development and human trafficking. San Francisco Mayor Ed Lee was the only other Bay Area mayor handpicked for the two-day conference, which also featured Gov. Jerry Brown.

Below is the transcript of Liccardo's address on "social inclusion."

I’m honored to join this distinguished panel, and I thank the Holy Father and the Vatican for the invitation, as well as the Sustainable Development Solutions Network for convening us to engage in this important dialogue.

I began my mayoral term only seven months ago in the City of San Jose, Calif. San Jose has grown quickly to a population of more than 1 million, the largest city in Silicon Valley, and the tenth largest in the United States. San Jose has quietly emerged as a catalyst of global innovation; home to holders of more U.S. patents than any other city, and site of many of the world’s leading technology companies.

We’re also proud of our remarkable diversity. In the spirit of its namesake, St. Joseph, San Jose is a city of immigrants. Some 40 percent of our adults were born in foreign country, and they comprise a great source of our strength: half of the venture-funded startups in Silicon Valley have a foreign-born founder, and their rags-to-riches stories have inspired thousands more to come to Silicon Valley each year.

Yet San Jose still falls short by any measure of social inclusion. Many of our immigrants and their progeny remain disproportionately poor, and a growing wealth gap exposes a more profound opportunity gap, marked by disparate access to quality education. I’ve launched efforts with community partners to broaden opportunity, such as by expanding after-school programs for underserved youth, and providing summer jobs for teens in struggling neighborhoods. Fundamentally, though, it is on the subject of housing where one finds the most palpable manifestation of San Jose’s troubling economic inequality.

San Jose faces an affordable housing crisis. That crisis is felt most acutely by the over 4,000 residents who find themselves homeless each night. The juxtaposition of Silicon Valley’s rich and poor has attracted the attention of international media, who gasped last year at the irony of 300 people living within the nation’s largest homeless encampment, only a 30-minute drive from the headquarters of Google, Facebook, Oracle and their billionaire CEOs’ homes.

So, too, is the plight of the many who work but struggle daily; according to one recent study, only one-quarter of Silicon Valley’s workers can afford a median-rent apartment in San Jose, with affordability defined as spending one-third of one’s income on housing.

Increasingly, we live in one Valley, but two worlds.

Let’s begin with “rapid-rehousing.” It is a tautology that the solution to homelessness is getting people housed, but we’ve discovered a unique benefit in prioritizing those homeless who appear most vulnerable. This category of the chronically homeless—the most mentally ill, the most addicted—are also the consumers of a disproportionately high amount of local government services—in emergency rooms, jails, and police and ambulance response—by being unhoused. We sought to identify the 1,000 homeless facing the greatest threats of harm, and house them first, we could conserve more resources to rededicate to others in need.

So, with scores of volunteers, we interviewed every homeless person we could find in the city—under every bridge, and in every park. Using a smartphone application, volunteers could readily record vital personal information and assess the self-reported vulnerabilities of each person—by mental health, addiction and physical health—and transmit the data to our Housing 1,000 database.

So far, we’ve been able to get 840 of our most vulnerable, chronic homeless into permanent housing—given our funding constraints, a significant achievement in a relatively short period of two years. For the first time in a decade, a biennial census in San Jose actually showed a reduction in our homeless count. Of course, thousands of homeless remain, and we have much work to do. But if the College of Cardinals can be blessed with the providential boldness to elect a Jesuit Pope, surely we can find the inspiration to end homelessness in our lifetimes.

Part of our work requires getting the homeless back to work. As the Holy Father observes, merely providing housing does not suffice; in Laudato Si, he writes, “Helping the poor financially must always be a provisional solution in the face of pressing needs. The broader objective should always be to allow them a dignified life through work.”

In that spirit, we’ve partnered with an innovative non-profit organization, San Jose Streets Team, to fashion a “work-first” approach to housing our homeless.  A couple years ago, we launched San Jose Streets Team as a pilot to engage homeless individuals in cleaning the very creeks and streets in which they once lived, with a goal of restoring a polluted creek bank to its pristine state. In exchange for their commitment to work, clients received housing and food vouchers and job retraining.

Within two years, we’ve employed and housed several dozen clients, and expanded the program to surrounding neighborhoods with additional grants. The model has gathered increasing notice, as seven other City Halls nearby—including San Francisco’s—have invited the Streets Team to embark on engaging homeless in their cities.

Next, we’re working on expanding the supply of transitional housing. Last year, we identified over 100 homeless living on the street who actually possessed housing vouchers that would enable their landlords to accept government-guarantees of monthly rent payments of as much as $1,300. Yet they were still living on the street, because they couldn’t find an available apartment with our low vacancy rates and high rents.

In the short-term, we’re focused on expanding the inventory of very low-income transitional housing through unorthodox approaches until more permanent solutions can emerge: through the conversion of motels to low-cost apartments, and with the inexpensive construction of micro-housing.  First, I’ve proposed that we identify motels in neighborhoods with frequent complaints about prostitution and criminal activity, and push to buy or lease the buildings to house the homeless. Renovating old motels saves at least half of the cost of new construction. Second, we’re trying to launch a “micro-housing” pilot—also known as “tiny homes"—to build very small, simple housing for homeless on public land, where we provide basic sewage, electricity, and services. We’ve identified a site for approximately 150 such units, and with the help of the philanthropic community, we aim to begin construction within months.

Of course, the challenge of housing affordability extends far beyond mere supply. Developers built 5,000 units of housing in San Jose last year, yet the rents and sales prices remain beyond the reach of many San Jose’s residents. Over the last decade, state and federal funding for housing subsidies has diminished sharply, leaving American cities struggling to find ways to finance affordable housing for the homeless and working poor.

Eight years ago, as a city councilmember, I proposed to make San Jose the largest U.S. city with a citywide inclusionary housing policy. Inclusionary policies require developers to build a percentage of affordable units within their projects, or alternatively, to pay a fee that is used to construct subsidized housing off-site. My proposal met stiff industry resistance, as developers and their lobbyists fought vigorously for two years, until we finally prevailed in enacting a policy in 2009. Unfortunately, court battles have delayed its implementation for five years. Finally, last month, the California Supreme Court upheld San Jose’s ordinance, providing legal precedent to hundreds of cities that had similarly sought to use inclusionary housing as a tool to create more affordable housing.

Combined with other measures we’ve recently passed, we should begin generating substantial revenues for investment in affordable housing projects in the year ahead. As these revenues emerge, I look forward to reporting significant progress in addressing our housing affordability crisis.

Finally, we can achieve affordability through environmental sustainability. In U.S. cities like San Jose, as much as 30 percent of a household’s monthly budget is spent on transportation, and our auto-dependence reinforces our historically suburban, sprawling nature of development. This sprawl renders residents of low-income neighborhoods increasingly isolated from jobs, services, and educational opportunities they need to thrive economically in high-cost Silicon Valley. In this sense, the automobile has become the enemy of social inclusion and affordability, evoking the words of the Holy Father in his most recent encyclical: “technological products are not neutral, for they create a framework which ends up conditioning lifestyles and shaping social possibilities….”

Through higher-density, transit-oriented development, we can dramatically reduce the cost of living for residents willing to embrace commute alternatives—transit, cycling, car-sharing, ride-sharing, or walking—while reducing GhG emissions. Other changes in codes and policies can also help. By allowing and even mandating smaller units, eliminating parking requirements and requiring greener building standards, we reduce the cost of living for our residents while shrinking our collective carbon footprint.

In all of these ways, San Jose will strive to make long-overdue progress in reducing housing cost burdens. I look forward to continuing this dialogue—to hearing, exchanging, and even stealing your good ideas—with attribution, of course—to continually improve. I’m particularly excited to launch a partnership with the Sustainable Development Solutions Network, and I look forward to sharing our results to facilitate our collective learning.

The people who we collectively serve have much to gain through our mutual success, in creating thriving global cities inclusive to all.