UPDATE: Lynbrook High gave Aaron Persky the axe on Wednesday. In a statement to reporters, Persky said he was fired at 2pm from his part-time job as junior varsity girls tennis coach, and that Fremont Union Superintendent Polly Bove told him the decision was “motivated by a desire to protect the players from the potentially intrusive media attention related to my hiring.” He added: “Although I am disappointed in with the district’s decision, it was a privilege to coach the team, if only for a short time. I wish all of the players the best in their future academic and athletic endeavors.”

When San Jose’s Lynbrook High hired Michael Aaron Persky as its junior varsity girls’ tennis coach, school officials say they had no idea he was the Aaron Persky.

But they found out the hard way: from angry parents who demanded his resignation because of a controversial sentence he handed down three years ago as a Santa Clara County Superior Court judge.

In 2016, Persky ordered ex-Stanford swimmer Brock Turner to serve a six-month jail stay for sexually assaulting a blacked-out woman after a campus party. Turner served half that time, igniting a firestorm of outrage against both convict and the judge. That outrage fueled a recall campaign that led to Persky’s ouster from the bench last fall. 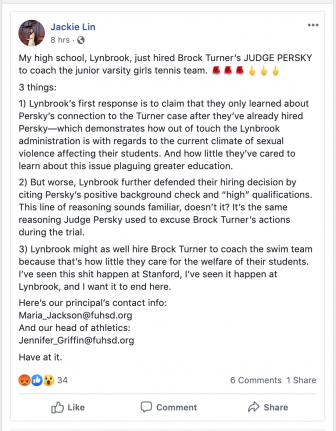 A host of parents voiced their anger about the hire online.

Persky lost more than his job—he lost his good standing in the community. And now, his fledgling career as a tennis coach is on the line.

School officials who hired him say the backlash, which manifest in a couple Change.org petitions (here and here), took them off guard.

“We weren’t aware of who we hired until last week,” Fremont Union High School District Superintendent Polly Bove says. “He applied as Michael Persky. If you were to Google Michael Persky, you would find that he was a physician that does plastic surgery.”

Indeed, there is another Michael A. Persky—a cosmetic surgeon in Encino.

According to school officials, that’s the name they saw on the ex-jurist’s coaching application: Michael Persky. He used his full name, Michael Aaron Persky, in his resume. Officials say his application didn’t raise any red flags; they conducted a thorough background check. And since Persky has attended tennis coaching clinics for youth and boasts a high rating from the United States Tennis Association, he was—it seemed, at least, objectively—a well-qualified applicant.

Everything had checked out. Until, that is, people recognized him as not the plastic surgeon but the notorious ex-judge. “It came to our attention just a few weeks ago that he was, indeed, the Aaron Persky,” Bove says.

So, she says, the school held a conference with students and parents as some members of the community expressed outrage in local news outlets and on social media. The realization roughly coincided with Turner’s victim—who was previously known to the public as Emily Doe—finally revealing her identity as Chanel Miller, author of a soon-to-launch memoir about her ordeal.

“It’s absurd that he would be hired in a position to be a leader of girls,” a teacher in the district, who asked to withhold her name, tells San Jose Inside. “A coach is a mandated reporter. And I wonder whether a girl would feel comfortable reporting to him if she had been assaulted in any way at school or otherwise?”

Bove then called that teacher, telling her that she cannot attend a meeting convened to address parent concerns, which was invitation-only. A San Jose Inside reporter tried to sit on the discussion, but was kicked out.

Persky declined an invitation to share his thoughts on the brouhaha for this story. Instead, retired judge LaDoris Cordell, who defended Persky throughout the recall and ever since, volunteered to speak on his behalf.

In a phone interview, Cordell bats away criticisms of Persky as overblown. She also echoes sentiments about him that she voiced during the recall effort: that anger over Turner’s sentence unfairly personalized the problem, making it all about one decision by an otherwise fair and respected judge. Finally, she asks, hasn’t he lost enough already?

“He has lost his job and his pension,” she says. “People need to remember: this was a judge for 13 years with a stellar reputation, [who also served as] a prosecutor for seven years. I will tell you, as a judge who was on the bench for almost 20 years in Santa Clara County, presiding mostly over criminal cases, that no reasonable and rational judge would ever have sentenced Brock Turner to prison. The most judge Persky could have given him [in] jail time is 12 months. So he gave him six months.” (Note: the statutory maximum was actually 14 years).

Then there’s the fact that Persky’s tennis team won 5-2 in their first match of the season, according to Cordell, who says that proves his talent as a coach too.

On Cordell’s point about Persky’s professional record, however, Jennie Richardson, one of the most prominent voices in the recall effort, begs to differ. And, she says, so do all the voters who booted Persky from the bench in a 62-38 vote last fall, making him the first California judge to lose the position by recall in more than eight decades.

But this isn’t just about the recall, she says. It’s about the public’s broken trust in Persky.

“The county overwhelmingly agreed that he does not see these issues clearly,” Richardson says, “so it's incredibly inappropriate for him to be responsible for young girls.”

A group of parents at Lynbrook were angered to find out the identity of their new tennis coach. (Photo by Nicholas Chan)