At their best, city-issued credit cards grease the gears of local government by streamlining small-dollar buys such as travel expenses and office supplies. Absent enough oversight, however, they enable questionable purchases like, say, an Xbox gaming console, $500 speakers or a bunch of goodies from Ulta Beauty—all actual expenses charged to city credit in recent years.

For the most part, San Jose’s 992 credit cardholders played by the rules in racking up a collective $14 million though 50,000 transactions this past fiscal year. But lax oversight has allowed for some worrying lapses, according to an internal review that looked at 4,000 of those charges over a two-month span.

In a recently issued report, City Auditor Joe Rois found that piecemeal policies and decentralized management have led to many missteps in the way employees handle their procurement cards, known as p-cards. The biggest offender? The sprawling Parks, Recreation and Neighborhood Services Department, which racked up a quarter of the city’s p-card expenses in the 2018-19 fiscal year and more than 90 percent of late fees.

Granted, with more than 700 full-time employees, parks and rec is one of the city’s largest departments. But Rois says it may have doled out more p-cards than the guy in charge—namely Parks Director Jon Cicirelli—can reasonably manage.

While Cicirelli’s department assigns a p-card coordinator to review each of the 16,000 transactions logged this past fiscal year by 246 cardholders, he’s the one who gives them the final stamp of approval. The San Jose Police Department, by comparison, accounted for the second-highest number of p-card transactions with 6,500 distinct purchases but two people assigned to review them.

The sheer number of charges might explain how Cicirelli’s staff skirted policy by using p-cards to buy a $270 Xbox gaming system, $500 speaker set and $1,000 bicycle—and then losing track of all three.

In his defense, the reasons for buying the gaming system looked fine on paper. Staff told him it was meant for 80 or so adults with mental illness and other developmental issues who attend an art and wellness program at the Northside Community Center.

“The Xbox was purchased to foster physical activity among participants,” Cicirelli explains in a recent interview. “Initially, staff was not sure how to secure the Xbox in a public space, and so it sat in storage.”

Since the audit, the entertainment console has been freed up to fulfill its intended purpose. But the way it was purchased underscores an ongoing need to rein in p-card spending in the department—and to get p-card payments under control.

From September last year through April 2019, parks and rec got slapped with $13,000 in late payment penalties. Cicirelli attributed the hefty fees to a “staff transition” in late summer 2018. After his team identified the issue, he says they “addressed it immediately” and paid it all down by May of this year.

The audit also dinged Cicirelli’s department for an inordinate tally of food- and drink-related p-card purchases. Over the last four years, food and drink charges city-wide have spiked 34 percent, totaling $653,000 in the most recent fiscal year. Parks and rec has accounted for more than 90 percent of that growth.

A few staffers in particular were chided for making routine bottled-water purchases for their own use—yet another violation of charge card policy. Cicirelli says he’ll knuckle down on audit recommendations by shrinking the number of cards in circulation and re-educating subordinates about the rules for tapping the city’s line of credit.

While Rois focused his p-card review on the bureaucratic side of City Hall, San Jose Inside conducted an independent analysis that suggests the need for the so-called Capital of Silicon Valley to invest in more cutting-edge credit controls on the 18th floor as well.

For weeks leading up to the release of the p-card audit, this news organization reviewed hundreds of p-card purchases made in the past year by City Council members and their staffers. All told, workday denizens of City Hall’s top floor charged 34 p-cards a combined $365,517 in the 2018 calendar year.

Vice Mayor Chappie Jones spent the least. The District 1 representative only swiped his card once, and that was back in September 2018 for a $300 ticket to attend the League of California Cities’ annual conference.

On the other end of the spectrum is someone who moved on from the city’s employ when her boss lost last year’s re-election to Councilwoman Maya Esparza.

Louansee Moua—the former chief of staff for Esparza’s District 7 predecessor, Councilman Tam Nguyen—finished out 2018 with a $52,745.38 p-card bill punctuated by a number of notable line items. A review of her receipts shows that Moua, who handled p-card purchasing for the entire D7 office, spent heavily on city-sponsored community events. She tells San Jose Inside that Nguyen would sometimes hold two to three events a week as a way to reach out to a “very difficult district” that frequently grapples with homelessness, roadside dumping, illegally parked cars and RVs, crime and graffiti.

“We were up to our eyeballs in events,” Moua says. “Council member Nguyen thought that was the best way to reach out to the community so that they had access to him and so that they have access to the resources. That was what we were tasked to do.”

Some of the events, Moua says, were convened to combat illegal dumping. “Dump Your Junk” weekends gave residents a chance to chuck their mattresses, e-waste and car tires into industrial-sized bins instead of surreptitiously abandoning trash by the roadside.

“This may sound like its not a big deal, but it was a pretty big deal to the people who lived in those areas to see their streets clean,” Moua says in her ex-boss’ defense. 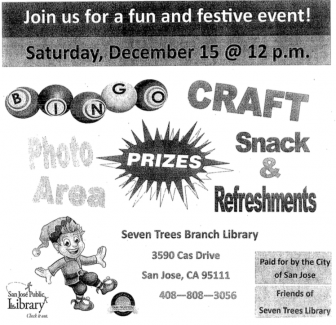 Many of the city-sponsored District 7 holiday events advertised prizes and raffles comped by p-cards.

But that doesn’t explain some of her biggest p-card bills, which came around the 2018 holiday season—after Nguyen lost re-election and as the D7 team coasted toward the end of its tenure at City Hall. In November last year, Moua spent $7,534.67 on her city p-card. She ran up another $14,692.97 the following month. Meanwhile, fliers for D7-hosted holiday events advertised free prizes, gift exchanges and raffles. Moua—on Nguyen’s behalf—spent nearly $3,000 worth of gift cards for those holiday raffles alone.

It was during that end-of-the-year, end-of-Nguyen’s-term charge-card spending spree that some of the most eyebrow-raising p-card buys cropped up. Namely, a $335.53 bill at Ulta Beauty for a Seven Trees holiday shindig and another held in honor of the late, great Iola Williams—San Jose’s first black councilwoman, who died about eight months prior at the age of 83. The cosmetics store haul included a $14 Urban Decay Naked Petite Heat eyeshadow palette, a $29 Ulta Beauty Luscious Lips and Lashes Kit and a $38 IT Cosmetics CC+ Cream with SPF 50. 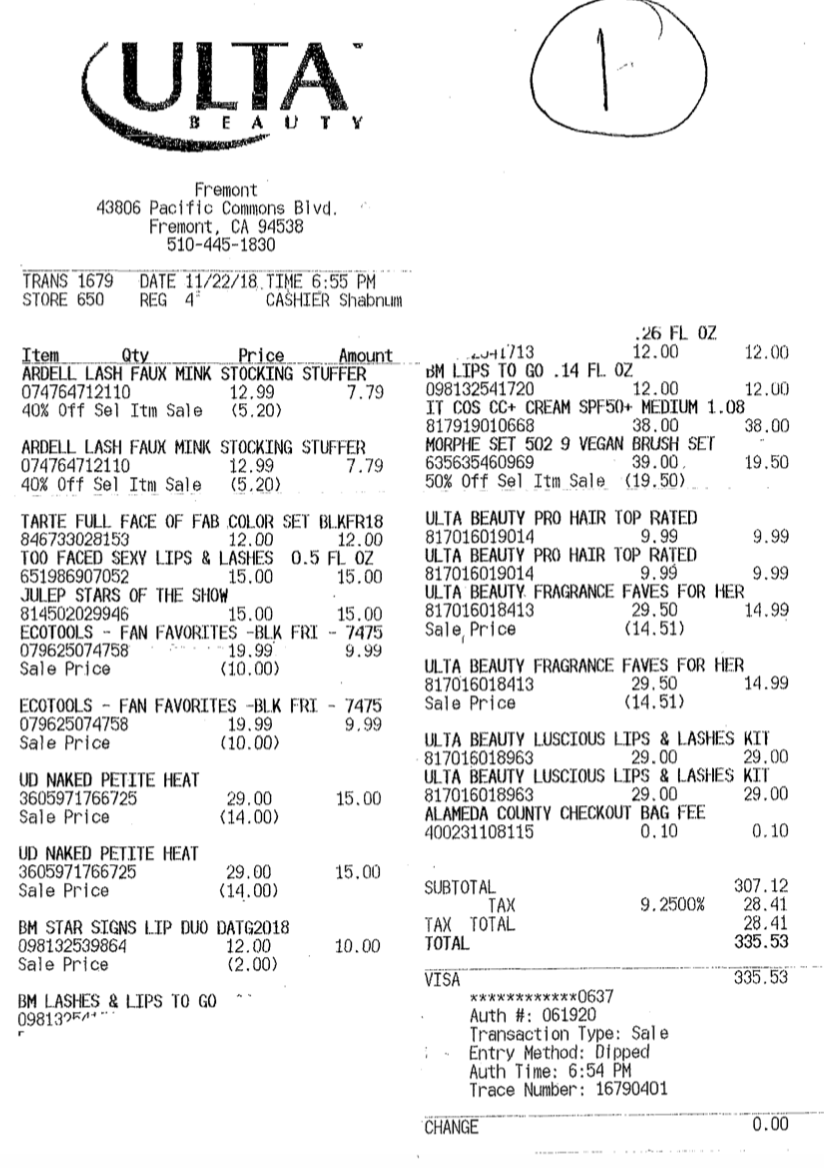 One of Moua's more interesting hauls was a $335.53 bill at Ulta Beauty. The items went to two different holiday-themed community parties.

Moua defends the taxpayer-funded purchases as a means toward a civic-minded end. She says the goal was to buy “not very expensive things,” and receipts from the Dollar Tree show that. “We’re not spending a ton of money on one item,” she says. “We’re spending on little things and putting them together.”

But what about the not-quite-dollar-store-cheap makeup? Moua says she wanted to “make accommodations of giving away things” that “adults” would like. Whether she made similar “accommodations” for non-makeup-wearing adults is unclear.

Coming in a not-so-distant second to Moua’s spending last year was District 6 Councilwoman Dev Davis’ Chief of Staff Mary Ann Groen, who charged $32,764.20 to her p-card in 2018. That’s quite a bit, considering how more than half of all 18th floor cardholders kept their individual bills for the whole year under $10,000.

Nguyen and his cardholding proxy Moua have long since left City Hall (the former runs Assemblyman Kansen Chu’s campaign for Santa Clara County supervisor; the latter works for a public agency in the East Bay). But their dubious spending highlights a problem that persists today: a lack of real-time p-card accountability on the 18th floor.

City Clerk Toni Taber, who oversees the council’s p-cards, says that in December—Nguyen’s final month before leaving office—the D7 rep came uncomfortably close to going over budget. “The main issue was that [Moua] said she was going to spend less than she did,” Taber explains. “We had an issue trying to get some of the receipts. By the time we got the bill, she was already gone.”

While Moua’s purchases ultimately checked out, Beth Rotman—the director of money in politics at good-government non-profit Common Cause—called the spending “questionable,” to say the least. “What this makes me think of is campaign spending,” Rotman says. “On some level, everyone expects someone to buy pizza. No one expects them to go out for steak dinners. This is a lot of money on wining and dining the district.”

And if Moua gets a pass, that begs the question: is the city of San Jose’s credit card policy too forgiving in the first place.