A seven-mile stretch of orange barricades, A-frame signs and dug-up asphalt cuts through Little Portugal. For a year-and-a-half, construction has turned San Jose’s Five Wounds corridor into a fender-bender inducing maze that chokes off traffic to a slew of small businesses.

Regulars manage to navigate the “cone zone” labyrinth for a cut from Mr. Raab, as they call the third-generation barber. But walk-ins have dropped off by about 60 percent, by his estimate. The inconvenience would have been short-lived. And the payoff—a state-of-the-art rapid bus line connecting San Jose’s East Side to downtown—would make up for the headache.

But on July 13, everything stopped.

Workers abandoned their posts. Tractors shuttled away. Caution tape went up to cordon off upended swaths of thoroughfare. The Santa Clara Valley Transportation Authority (VTA) halted the $114 million project days after a third-party contractor hit a live gas line on July 9. Five weeks later, the VTA says it’s unclear when work will resume, how long it will take to finish and how much it will drive up costs after a series of blunders by what the agency has deemed an incompetent contractor.

“Now what?” Mr. Raab wonders, eliciting affirmative nods from customers waiting their turn in the lobby. “It’s a ghost town.”

After a decade of planning, the VTA broke ground on the Santa Clara-Alum Rock Bus Rapid Transit line in March of last year. The high-speed buses promised to quicken travel through some of the most transit-dependent communities of Silicon Valley at a fraction of the cost of rail. Funded by state and local bonds, the 7.2-mile route would be the first of three rapid bus lines in Santa Clara County to converge in the heart of San Jose. 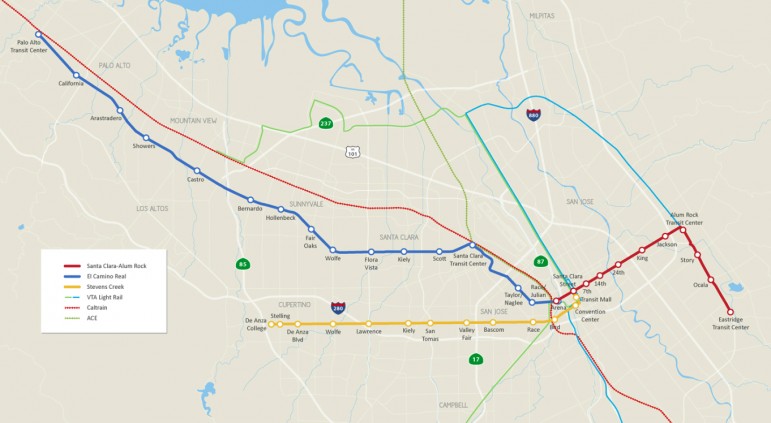 “It will basically transform the streetscape,” says Tamara Alvarado, director of the Mexican Heritage Plaza, which lies along the unfinished route. “If you live in downtown, you can whip down here in seven minutes. That’s a huge long-term benefit.”

With all the delays, though, that vision is a long way off. Meanwhile, roadwork has made it a struggle to draw new people to the community center.

“We’re busting our butts to activate this space, but people think we’re closed,” Alvarado says. “They see the construction tape and the orange cones and it’s just not inviting.”

In November 2013, VTA’s Board of Directors awarded a $54 million contract to Goodfellow Top Grade. The Livermore-based company pitched the lowest bid—$7.2 million below the VTA’s own project estimate—and won out of a field of eight contractors.

A competing company asked the agency to reconsider the deal. Graniterock Construction noted the “highly irregular manner in which VTA staff has come to recommend project award, having rejected all bids, returned bid bonds and re-advertised the contract.” VTA dismissed the appeal, deciding that Goodfellow’s low-ball bid would save money and keep things on track to finish by fall 2015.

“At the beginning of the project, hope was eternal,” says Scott Knies, head of the San Jose Downtown Association. But problems cropped up fairly early. The contractor missed deadlines, uprooted too many trees and fell behind on ordering materials, according to the VTA.

“There were certainly signs that this wasn’t on schedule,” Knies says. “The work by the arena was not that big of a project, but they still had issues getting all the details right. It’s not as bad as what they’re going through at Alum Rock, but it is a concern.”

From his father’s CPA office at Alum Rock and North Third Street, George S. Mattos said he has seen an inordinate surge in car collisions. A security camera in the lobby caught several run-ins on video in the past few months alone.

“There are no safe turns out there,” he says. “People keep running into each other and we can see it all from right here.”

VTA spokeswoman Brandi Childress says the agency will hold Goodfellow Top Grade accountable for traffic control during the project’s stand-down. By press time Tuesday, VTA remained locked in contractually required negotiations with the company over how to move forward. Calls to the contractor were not returned.

“Now I’m scared,” says Manuela Torres, who owns the Padaria Popular Bakery on Alum Rock. “Back-to-school is busy for us. Halloween is busy. I hope this doesn’t hurt us, you know.”

A few doors down from the Portuguese bakery, Mr. Raab shakes his head, bemoaning another flap over transportation.

“When you go a long time without good leadership, this is what you get,” he says. “You’re left out of everyone else’s progress.”

In the last few years, the East Side has had its county supervisor, George Shirakawa Jr., go to jail for stealing campaign funds and misusing taxpayer dollars. Its councilman and state assemblymember, siblings Xavier and Nora Campos, respectively, were implicated in a rigged election scheme by the District Attorney’s Office. Constituents have been left to wonder who’s sticking up for them while their elected officials are busy defending themselves.

Last year, the VTA nixed plans to build a BART station in the Five Wounds area, the largely Latino district encompassing Little Portugal. Public backlash prompted the VTA to put the station back on the blueprint for 2019. But the slight raised concerns about the agency’s financial stewardship. Now, that worry is coupled with uncertainty over the rapid bus line—how much it will cost and how long it will take to finish. All while the VTA lobbies for a new tax in 2016.

“You don’t see these problems in downtown,” Mr. Raab says. “Nope. It’s always in the East Side.”

Over the weekend, Councilwoman Magdalena Carrasco met with a dozen businesses owners affected by the construction.

“They were pissed off,” says Victor Gomez, her chief of staff. “They have every right to be pissed off.”

While the VTA has yet to announce a completion date, Gomez says there’s a chance it will drag well into next year. As a result, Carrasco will enlist county Supervisor Cindy Chavez and San Jose Mayor Sam Liccardo to help make the streets safer for the time being.

“What we’ve seen with this contractor has been pretty disquieting,” Gomez says. “There doesn’t seem to be a sense of urgency.”

The VTA's landing page for the Santa Clara-Alum Rock project still lists the completion date as fall of this year and the total cost as $114 million. But a semi-annual report from the agency published in December last year shows a revised cost of $127.1 million and a end date of 2016. It also mentions problems not reflected on the project's info page, indicating that VTA knew the project fell behind and ran over cost at least nine months ago but didn't announce that to the community.

"Due to some utility relocation delays, late permit and contractor delays, completion is now anticipated in Summer 2016, approximately five to six months later than originally anticipated," the December report states. "Major utility relocations are now complete. Alum Rock Avenue widening and station platform construction outside of the downtown area are ongoing and expected to continue throughout 2015."

Those details were never disclosed on the page created to keep the public up-to-date on the project. A lot of residents and business owners in Little Portugal had been referencing an outdated schedule with a year-old cost and deadline estimate. It wasn't until Aug. 11, about a month after work was put on hold, that the VTA acknowledged a delay and admitted it has no idea when this ordeal will wrap up.

Bay Area leaders have called bus rapid transit the future of transportation, a relatively low-cost “subway on tires.” The VTA wanted the Alum Rock line up and running before similar projects in San Francisco and the East Bay, which have languished over public opposition to the prospect of exclusive bus lanes.

But a dozen years after broaching the idea for this high-tech bus, the VTA is behind schedule, over budget and has yet to get one on the road. 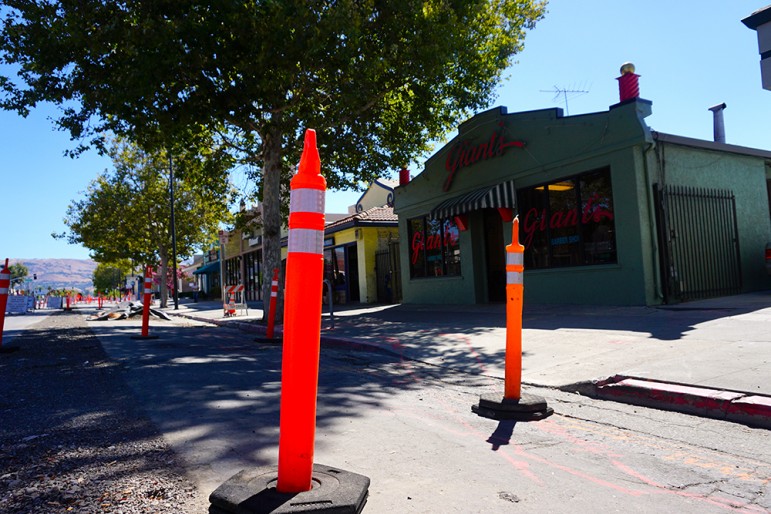 A maze of cones and dug-up asphalt makes it hard to navigate Alum Rock Avenue. (Photo by Jennifer Wadsworth)