South Bay Democrats have a chance to shape the future of the state party this weekend.

The obscure every-other-year elections of Assembly delegates—known as ADEM—kick off this Saturday and Sunday and continue the following two weekends. They span 80 districts statewide and will result in the election of 1,000 people with the power to decide which policies and candidates Cal Dem should back and who should lead the state party in the wake of Eric Bauman’s resignation as chair amid sexual misconduct allegations.

Historically, the winners comprise politicos and their inner circles. But this year has drawn a far more diverse range of candidates organizing progressive slates up and down California in hopes of reforming the party from within.

While voters can pick only one Assembly member at a time, Democrats on a biennial basis can choose 14 new delegates—half men, half women—in each district. The vast majority of the South Bay is covered by Assembly districts 25, 27 and 28, where no representative endorsed a full slate.

In AD 28—the district with the largest geographic reach in the county—a total of 33 candidates are in the running.

Reformers have curated a slate of 14 delegates they’d like to see elected. The group called Progressive Revolution, helmed by Santa Clara County Democratic Party executive board incumbent and labor activist Olivia Navarro, supports a platform of social, economic and environmental justice and policies such as Medicare for All and a Green New Deal. The slate also endorses progressive activist Kimberly Ellis as state party chair. 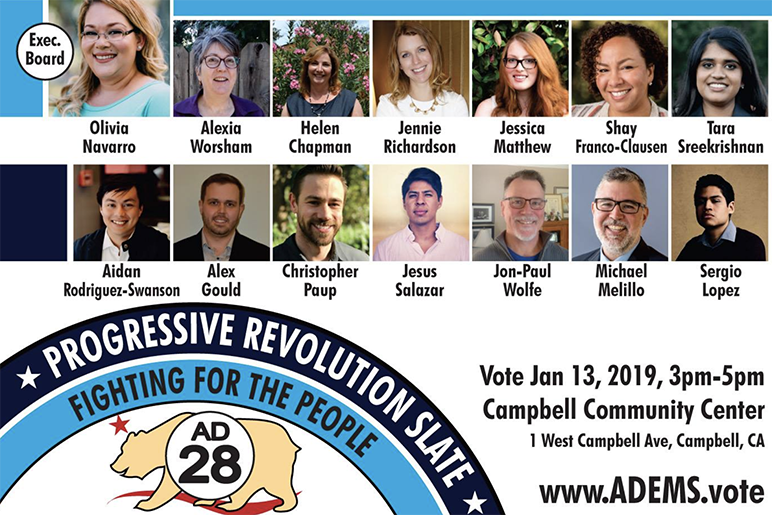 Lin described the slate as “activists and workers who have spent years boots on the ground to flip congressional districts, elect progressives to office, and push through progressive policy and change with real and tangible results.” 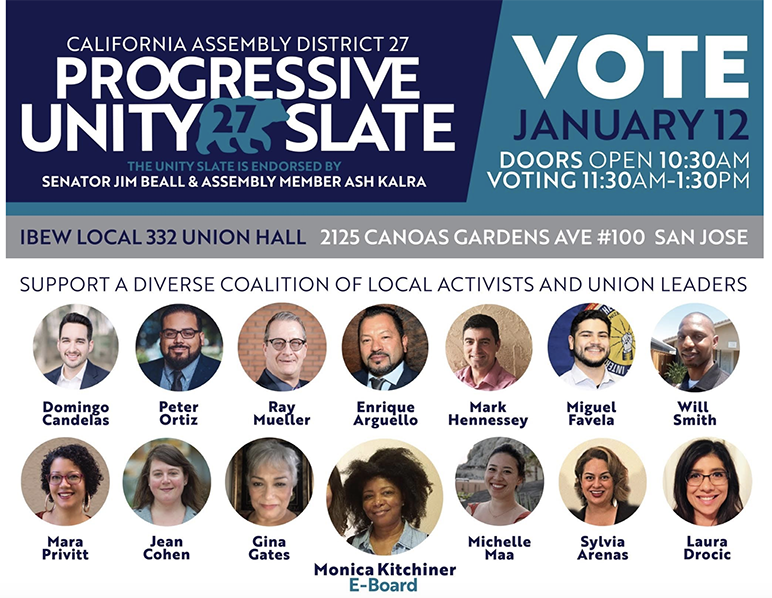 Click here to read bios of each would-be delegate. To find out what Assembly District you live in, go to findyourrep.legislature.ca.gov. To find out if you’re eligible to participate in the intra-party elections, check your registration status at sos.ca.gov/elections/cavoter.

The ADEM elections in Marc Berman’s Assembly District 24 will take place on Jan. 26. Click here to see the times and dates.