According to the lawsuit filed this week by the U.S. Department of Labor (DOL), the Palo Alto-based big-data firm routinely picked white hires in lieu of equally qualified Asian applicants. In one example brought up by labor officials, Asians comprised 73 percent of qualified candidates for an internship position but made up only 19 percent of the people Palantir wound up hiring.

The odds of that disparity falling to chance: One in a billion, by the DOL’s calculus.

Authorities call that unacceptable for any company, but especially one that claims $1.2 billion in taxpayer-funded contracts. The accusations could threaten the firm’s government business, as regulators can cancel existing contracts and stop future deals.

“Federal contractors have an obligation to ensure that their hiring practices and policies are free from all forms of discrimination,” Patricia Shiu, head of the U.S. Office of Federal Contract Compliance Program, said in a prepared statement.

“Discrimination is never justifiable, and it is disgraceful that this remains an issue in 2016,” the state lawmaker said. “Successful companies understand that a diverse workforce adds value and maximizes creativity and productivity.”

Palantir denied the charges and called the decision to litigate a letdown.

“We are disappointed that the [DOL] chose to proceed with an administrative action and firmly deny the allegations,” the company wrote in an announcement. “Despite repeated efforts to highlight the results of our hiring practices, the [DOL] relies on a narrow and flawed statistical analysis relating to three job descriptions from 2010 to 2011.”

Despite requests from several news outlets, however, the company refused to disclose data on the diversity of its workforce.

The implications of the lawsuit should resonate with other Silicon Valley companies, which have a reputation for being overwhelmingly white—especially among the executive ranks. While Asian Americans make up about a third of the workforce at some of the tech industry’s biggest companies, they are dramatically underrepresented in leadership.

A 2015 report called “Hidden in Plain Sight” found that Asians occupied only 14 percent of executive roles at five major tech companies. The numbers are even worse for women of Asian descent, who made up only 3 percent of executives, according to the same study. 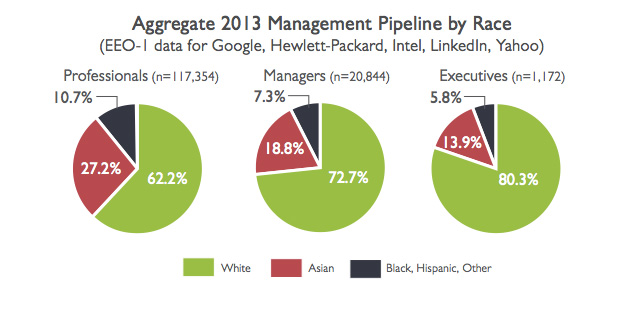 The complaint—available here—also undermines the tech industry’s assiduous branding as a meritocracy by showing how startups grow by mining personal connections.

The lawsuit indicates that one of the reasons Palantir apparently favored white applicants over anyone else is because it incentivized employee referrals. Labor officials aren’t accusing the company of overt racism, but of relying on a practice that excluded Asians at a far higher rate than white applicants. Staff recommendations accounted for more than half its hires, according to the DOL claim.

The Equal Employment Opportunity Commission includes a cautionary note about word-of-mouth referrals in its explainer on discriminatory hiring.

“Unless the workforce is racially and ethnically diverse, exclusive reliance on word-of-mouth should be avoided because it is likely to create a barrier to equal employment opportunity for racial or ethic groups that are not already represented in the employer’s workforce,” the watchdog committee explained on its website.

Some companies have worked around that by offering more lucrative incentives for referrals that result in female or minority hires.

The CIA-funded Palantir, whose name is inspired by the Lord of the Rings trilogy, first came under widespread scrutiny in 2013, when Edward Snowden brought attention to its role in illegal government surveillance programs.

In addition to the charges of discriminatory hiring, the 12-year-old company valued at $20 billion by private investors has faced allegations about other improper business practices, among other things. In May, Buzzfeed reported that the government contractor has struggled to curb an employee exodus, lost big clients and may not be raking in as much revenue as it claims.

Thiel made headlines around the same time for admitting to bankrolling lawsuits by Hulk Hogan and other plaintiffs against Gawker, which ultimately led to the website’s demise.