After seven years on disability, Chris Lierle’s new job at a South Bay financial institution marked the start of an exciting new chapter. “This was my big triumph in life,” he says.

The 52-year-old corporate trainer packed his belongings in a 16-foot Budget rental truck for the 1,900-mile trek from Texas to Palo Alto, stopping by taverns, diners and gas stations along the way. When the time he reached his destination on March 1, he didn’t feel quite right. “I wasn’t sure if I was even sick,” Lierle recalls in a recent interview. “I didn’t think much of it and went to my first day of work.”

March 4, he stayed home. The fever persisted and he developed a deep, throaty cough.

By then, California announced its first COVID-19-linked fatality, bringing the nationwide death toll to 11. Global cases from the novel coronavirus approached 93,000 as the disease spread to 81 countries and began to push Italy’s hospitals to the breaking point. California Gov. Gavin Newsom declared a state of emergency as a Princess cruise ship exposed to the virus approached the San Francisco Bay.

Back on the Peninsula, Lierle figured that, given his history of cross-country travel, the responsible thing to do was to get tested and work the rest of the week from home. He reached out to his healthcare provider, Standard Health, which insisted on a telemedicine screening. Despite a clear mapping of COVID-19 symptoms, Lierle says they seemed to lack urgency and went by the Centers for Disease Control (CDC) and Prevention’s outdated standard of limiting tests to people who had traveled internationally. 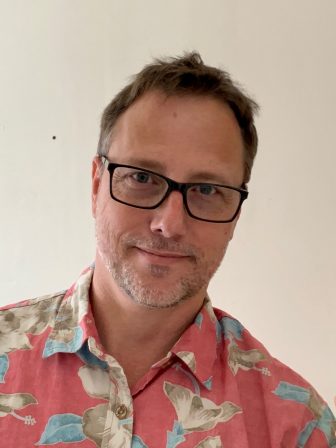 By the end of that first week on the new job, Lierle’s boss got sick for about 12 hours before the symptoms subsided. So did Lierle’s immunocompromised girlfriend.

With anxiety mounting about having potentially subjected other people to a highly contagious respiratory disease, he called Santa Clara County’s Public Health Department for help getting tested through Stanford University, to no avail.

Next, he tried One Medical, a membership-based primary care practice, which initially denied him because of the same outdated CDC criteria before finally relenting after he pushed back.

Even so, another full week passed before the test transpired. On the day of his appointment, Lierle donned a Hawaiian shirt—because, he says, “when the going gets tough, the tough get tropical”—and left his self-imposed quarantine to drive to a private doctor’s office all the way up in San Francisco.

At the clinic, in a stripped-down room, a nurse dressed in head-to-toe protective gear—goggles and all—swabbed one of his nostrils for a flu sample and the other for COVID-19, the disease caused by a novel coronavirus called SARS-CoV-2. Results from the flu test came through by the time he reached Palo Alto: negative.

As of today—18 days since he fell sick—Lierle has yet to hear back about the other diagnosis. He chalks up the long wait to “TDTS: Trump Delayed Testing Syndrome,” referring to President Donald Trump’s botched testing rollout, which caused the rapid spread of the pandemic by people with the disease who don’t even know they have it.

“We’re at a coin flip here,” Lierle says. “If I can’t get a test result even in my situation, then how do we as a population have any idea what our sick people are sick with?”

The short answer? We don’t.

While other countries deploy massive testing operations, the United States lagged so far behind that it’s barely mapped out the scope of the problem.

South Korea has tested at least 274,000 people since the outbreak began by conducting massive drive-through operations that reached 10,000 people a day. The U.S. reported testing just 25,000 specimens, according to the latest figures from the CDC, which fails to specify how many specimens it tested per person. Crowdsourced data puts the actual figure for the U.S. total closer to 60,000 tests on as many patients, with about 6,000 positives. A problem with initial batches of tests and a delay in approving commercial kits set the nation back in controlling COVID-19.

Now, faced with uncertainty over the actual breadth of the pandemic, the only choice left is to try to slow its spread. That’s what’s driving the kinds of draconian shutdowns that so dramatically changed everyone’s way of life this past week.

California, with a population of about 40 million, initially received just 8,227 kits from the CDC but could only use a fraction of them because of missing compounds. Other states reported similar issues. Only 156 kits initially went to Santa Clara County—ground zero for the pandemic with more than one third of the state’s confirmed cases. As of this past weekend, the state had conducted 8,316 coronavirus tests, but Gov. Gavin Newsom said expansion of mobile testing will boost that to another 5,500 patients a day.

California has since been trying to transfer the missing test components to its 18 labs as officials try to ramp up testing capacity by other means. Quest Diagnostics, a commercial lab in San Juan Capistrano, has reportedly run 1,200 tests a day for the past several days and plans to open another two facilities by the month’s end.

Closer to home, the Santa Clara County Public Health Department said its lab can only run up to 40 tests a day. Stanford’s laboratory, up to 100. According to reporting by ProPublica, each kit can run anywhere from 700 to 1,000 specimens—but each patient may require two samples to get an accurate result.

It’s unclear how many patients Santa Clara County has tested based on the kits available and labs up and running. Last week, the county Board of Supervisors urged health officials to drum up some concrete numbers and a strategy to scale up testing to reach asymptomatic people who may be unwittingly exposing others to the virus.

Still, slowly but surely, it looks like testing capacity is increasing. Stanford University recently started offering drive-through tests for patients referred by a health care provider based on symptoms or exposure to SARS-CoV-2, the virus that causes COVID-19. Unlike the test taken by Lierle, Stanford promises results in just 24 hours.

“It’s really a much faster and safer solution,” Dr. Maja Artandi, medical director of the so-called Express Care clinics, said in Stanford’s announcement of the new service. “The patient is not going to expose anybody else. The clinic is not going to be exposed.”

“People must be screened and confirmed as high risk first,” county Supervisor Cindy Chavez explained in a Facebook post announcing the new test sites. “If people have severe symptoms they should call their doctors as these collection sites do not offer acute medical care. We have three sites in total in San Mateo, at Stanford University and at the Santa Clara County Fairgrounds. We hope for more sites and increased capacity soon.”

Earlier this week, federal officials said they would also set up more drive-through testing nationwide and pick up the pace by processing more samples in commercial labs. The CDC estimates that it there should be 1.9 million tests available by the end of the week.

That’s little help to Lierle, who’s coming up on three weeks since he first felt his symptoms. And anxiety about the results isn’t just personal. He wants to know whether he compromised anyone else on his road trip, at his new job or in his own house.

“I’ve been living in a small world just to keep everyone else safe,” he says. “At this point, my test results aren’t just for me—they’re for everyone at my office, for my boss and my girlfriend. That’s why early testing is so important. A test delayed is a test denied.”

#RampingUpTestingForCoronavirus A drive-through coronavirus pilot testing program is underway at the County of Santa...