A Santa Clara County jail guard has been suspended from work after his arrest Monday on suspicion of molesting a child in 2012.

San Jose police booked 33-year-old Anthony Felix Diaz without bail on two counts of child abuse and a third count of having sex with a 9-year-old girl. All felonies. 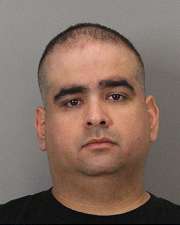 Detectives arrested the correctional deputy at his Santa Clara home hours after someone reported that he abused the daughter of a woman he lived with a few years back, according to the San Jose Police Department.

Diaz’s arrest marks the latest in a series of scandals that have plagued the county jail system and prompted sweeping reform efforts.

The Sheriff’s Office, which oversees the county’s two jails, placed Diaz on unpaid leave because of the serious nature of the allegations. Sheriff Laurie Smith said she has high expectations of her deputies both on and off duty.

“The allegations are deeply disturbing,” she wrote in an email Tuesday. “If they are true, this correctional deputy did not meet the standards of our office and he must be held following standard protocol.”

In addition to the SJPD investigation, she said, her office will conduct an internal probe into the allegations against Diaz.

“We condemn such heinous acts, if substantiated, and look to the justice system to determine guilt or innocence,” the union’s acting president Julio Alvarez wrote in a statement to San Jose Inside.

Police ask anyone with information about the sexual abuse case to call Detective Sgt. John Hutchings or Detective Sean Ancelet, who work in SJPD’s Sexual Assaults Investigation Unit, at 408.277.4102.

To remain anonymous, call Silicon Valley Crime Stoppers at 408.947.7867. Tipsters who offer details that lead to a conviction may qualify for a cash reward.