Earlier this month, an anonymous envelope arrived in the mail. It contained what appears to be Congressman Mike Honda’s “1000 Cranes” list, the million-dollar Rolodex of 1,000 donors who contributed at least $1,000 each.

The fundraising initiative—the political equivalent of an airline or hotelier’s loyalty program that provides preferred customers with room upgrades or seats with more legroom—never hit its body count. It nonetheless provided concierge-grade representation in Washington, D.C.

Honda’s employees referred in emails to “friends of MH,” meaning they were given priority over other constituents. Faster, better government access for those who could afford it.

Honda, in many ways, lost the benefit of the doubt when the Office of Congressional Ethics decided that there is “substantial reason to believe” the eight-term congressman violated House rules. The bipartisan panel released a 41-page report in September that recommended the House Committee on Ethics further investigate Honda (D-San Jose) and his staff for using “official resources for campaign purposes.” Another conclusion was Honda’s biggest campaign contributors may have received favors, such as access to the congressman or even help in facilitating immigration visa requests.

The “Cranes” database (posted below) appears to have fallen short of 1,000 check writers, noting just 281 people and groups who helped support the congressman’s 2010 and 2012 re-election efforts. But many contributors gave far more than $1,000. The documents list some of the most influential people, unions and political action committees (PACs) in national politics, as well as difficult-to-attain personal information, like the phone numbers of billionaires.

In addition to the amount each contributor gave in two separate election cycles, the “Cranes” documents include: addresses, home and work telephone numbers, employers and, if required, nicknames for the congressman to use when addressing individuals.

Honda campaign manager Michael Beckendorf agreed to discuss the “Cranes” list by phone Monday evening, but only if the conversation was kept off the record. He did not return a follow-up call.

A review of the list, along with a crosscheck of contributions made to Rep. Honda’s campaigns and official actions he took while in office, suggest that “Cranes” received preferential, if not transactional, treatment.

On Oct. 12, 2011, Honda walked on to the House floor and wished Takayoshi Oshima a happy birthday. It was a short speech, all of 441 words recorded in the Congressional Record, but a nice gesture to the CEO of Allied Telesis. What the record did not note, however, is that Oshima was Honda’s single biggest campaign benefactor in 2010, and a week prior to the birthday wish, Oshima maxed out with a contribution of $2,500. In total, Oshima gave Honda’s 2012 campaign $15,000: $5,000 to his actual campaign, and another $10,000 to Honda’s PAC, New Vision America Fund.

In the spring of 2010, Honda introduced the Smart Electronics Act, H.R. 5070. The bill’s goal was to create new requirements on greenhouse gases when manufacturing smartphones and other electronic devices. Sehat Sutardja, CEO of the Santa Clara-based Marvell Semiconductors, Inc., was quoted in Honda’s press release and described as “a leading industry proponent of the bill.”

What the release omitted is that just six months prior, on Oct. 4, 2009, Sutardja and Marvell co-founder Weili Dai, both listed as “Cranes,” gave Honda’s 2010 re-election campaign the highest permissible contributions of $4,800 each—as well as a combined $10,000 for Honda’s PAC the same day.

Anita Chan, a retired homemaker and noted “Crane,” has supported Honda throughout his time in Congress. Her inclusion on the list is significant because the only bill Honda has authored in 14 years in Congress led to a San Jose post office being named in 2009 after Anita’s late husband, Gordon Chan, a commercial flower grower and civic volunteer. Anita Chan gave Honda $4,000 in 2010 and $2,000 in 2012.

Honda has mostly refrained from commenting on his “Cranes” list and the House Committee on Ethics investigation, but on Monday he attended two fundraisers co-hosted in Silicon Valley by “Cranes” Ta-Lin and Joyce Hsu, and C.C. and Regina Yin. The events sold a variety of contribution levels and teased access to Gary Locke, the former U.S. Ambassador to China.

Hari Sevugan, a spokesman for Ro Khanna, Honda’s challenger in last year’s elections and rematch opponent for 2016, said that Honda’s decision to attend the event instead of budget negotiations in Washington D.C. “doesn’t just show how unessential he is to this Congress, but where his priorities lie.”

Sevugan added: “It used to be sort of a joke that Mike Honda has only passed one bill in his eight terms in Congress, and that was to name a post office. Now that we know the post office was named for one of his top donors, it’s also telling.”

In an email, Beckendorf called criticism of Honda’s decision to return to the district “absurd and unfounded.”

Attempts to obtain more information from Honda’s office over the last several months have gone nowhere, in part because Congress—unlike other federal agencies—is not subject to Freedom of Information Act (FOIA) requests. This means, there is no way to compel release of information related to Honda’s interactions with his nearly 300 “Cranes.” 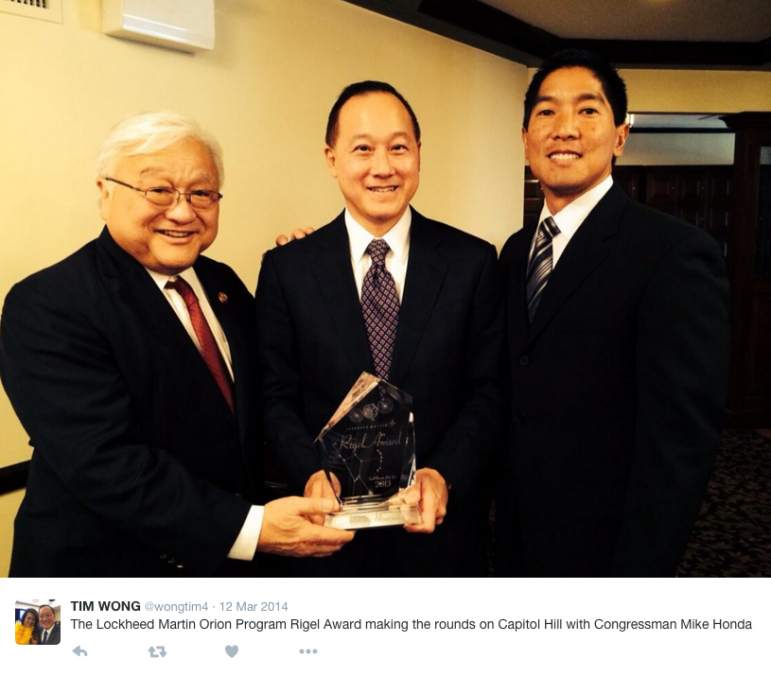 Famed venture capitalist Vinod Khosla was listed as one of Honda’s “Cranes” in 2010 and 2012, when he gave $2,400 and $2,500, respectively. But in 2013, Khosla threw his support behind Khanna. A year later, Honda was free to slam Khosla’s efforts to shut off public access to Martin’s Beach, which traversed the VC’s property.

Honda received plenty of well-deserved kudos for his commitment to public spaces, but his outrage was absent in late 2012, when he still had Khosla’s support—and money.

In one of President Obama’s more recent trips to Silicon Valley, Honda escorted the POTUS to the home of real estate magnate George Marcus and his wife, Judith. Both are listed as “Cranes,” and the two have been among Honda’s biggest supporters. Each maxed out in 2010 ($4,800) and 2012 ($5,000), and the Marcuses also kicked in $5,000 for Honda’s PAC during the 2012 election cycle.

One of the more intriguing details of the “Cranes” list is that it doesn’t differentiate dollars given to Honda’s PAC and his actual campaign. In fact, on more than a few occasions, donors contributed money on the same date to both campaign funds.

Ann Ravel, chair of the Federal Elections Commission (FEC) and former lead counsel for Santa Clara County, told San Jose Inside that FEC rules are notoriously loose. In the history of the commission, she noted, there has never been a single investigation into improper coordination between candidate committees and PACs.

“Obviously, people can contribute to both of them legally, the issue is the question of coordination,” Ravel said. “As I have decried before, the rules on coordination were written many years ago, prior to the existence of Super PACs, and the commission has been unwilling to write rules that would address some of these issues.”

Sources suggest Honda may be benefitting from the slow turning wheels of government’s self-policing mechanisms. In its recommendation to continue investigating Honda and his staff for commingling representative government and political campaign activities, the Office of Congressional Ethics (OCE) recommended that Honda’s 2014 campaign manager, Doug Greven, be subpoenaed to testify.

Greven has not returned calls for comment, but sources say that the House Committee on Ethics has still not contacted Greven more than three months after the OCE’s report was made public.

Linked is a PDF of what appears to be Congressman Mike Honda’s “1000 Cranes” list. Home addresses and phone numbers have been redacted.