For the third time in five days, Councilmember Johnny Khamis offered a new timeline of events regarding his decision last week to abstain from voting on his own memo. He called San Jose Inside late Monday afternoon to clear up what he called “mistakes” in a previous article, which reported that Khamis had asked the council to defer a vote about rezoning a property he inquired about renting just days earlier. He would end up recusing himself from the vote altogether.

On Monday, Khamis told San Jose Inside that he first spoke with Councilmember Ash Kalra about getting in touch with the owner of San Jose Skate—formerly Aloha Skating Rink—on Monday, March 3. The rink is located on a property in Kalra’s district.

“I had talked to Councilmember Kalra on the 3rd of March, after I went roller-skating at the place (on Sunday),” Khamis said.

But Kalra, who alerted City Attorney Rich Doyle to a potential conflict of interest on Khamis’ part, leading to the latter’s recusal from the March 11 council vote, showed San Jose Inside text messages the two men shared starting on Sunday, March 2. 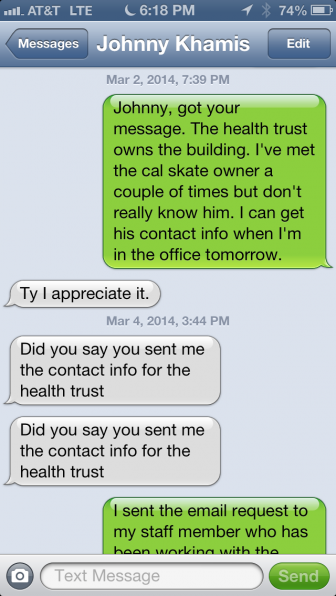 There was some initial confusion about who owned the property, but Kalra’s office eventually connected Khamis staff to the right people.

On Monday, Khamis further revised his timeline of events by telling San Jose Inside that he didn’t speak to the skate rink’s ownership group, Imwalle Properties, until Friday, March 7—a full week later than the date he first proffered, Feb. 28. Adding a little uncertainty, Khamis said he could only remember speaking to “someone named Razumich or Don.” More than likely Khamis spoke to John Razumich and Don Imwalle Jr.

Through that conversation, Khamis said, it was clear that he no longer had an interest in leasing and renovating the space, because of the exorbitant cost of rent. The owners, he said, are considering renting out the skate rink to fitness gym operators, which could net them up to $70,000 a month.

Khamis then added another correction to his prior statements by saying he didn’t become aware of a March 11 agenda item regarding the property’s rezoning until reading his council packet during the weekend of March 8-9. When he spoke with San Jose Inside last week, Khamis said resident concerns alerted him to the rezoning on March 6 and 7.

While such a mix-up of dates is hard to believe, Khamis also appears to have conjured conversations.

On Monday, he claimed that he didn’t consult Kalra in his deferral request on Monday, March 10, “because all memos that are going to be joint have to be filed on Friday.” Khamis added that he feared contacting Kalra again would violate the Brown Act’s open meeting laws. “I had already talked to one other person, and I didn’t know if he talked to anybody,” Khamis said.

Khamis said he reached out to colleague Pete Constant before the March 11 council meeting. But Constant, who San Jose Inside contacted via text while Khamis was still on the phone Monday afternoon, said in a message that he never discussed the matter with Khamis before the March 11 meeting.

Challenged on his statement, Khamis had no answer for why Constant would not remember such a conversation. He instead accused Kalra of perpetrating a “hoax” on the community to replace the skating rink with a gym.

“You have your story,” Khamis said. “Whatever. Do what you want to do. The real story is [Kalra] is trying to pull the wool over people’s eyes about the skating rink. This is crazy. This is not the way we’re supposed to be behaving as councilmembers. This is completely unprofessional.”

“I don’t know what he’s talking about,” Kalra said.

“The bottom line is this (agenda) item applies to zoning, not the use. It’s not our goal to tell people what to do with their private property. The gym is not the relevant part of the action. The relevant part is conforming the zoning with the general plan. It doesn’t speak to what it is or what it’s going to be.

“To those who are interested in keeping it a skating rink, they should take it up with the owner.”

City Attorney Rich Doyle said on Monday that he would continue to advise Khamis to recuse himself from any votes pertaining to the property.

Khamis, who said he was buying a new cell phone and picking up his son from school during his two conversations with San Jose Inside last week, said that he simply misremembered dates in prior conversations.

“I was very flustered from other things,” he said.