A foster youth education coordinator in the county’s Social Services Agency, Rivera admitted he didn’t even know a report existed. The colleague hinted he might want to take a look.

“I found a lot of programs, services and numbers that were questionable,” Rivera said.

Not sure what to do, he went to his administrators in the Department of Family and Children’s Services, which oversees the county’s foster child services—except for those delivered by the Office of Education (COE), which is a separate entity from the rest of the county’s operations. A series of meetings ensued—until September 2012, when Rivera made a Public Records Act request for COE’s contracts, emails, budget documents and federal grant reports.

Linda Aceves, then COE’s schools chief, suggested his interest had gone from vigorous to excessive. “Her exact words were: ‘You’re not going to find anything,'” Rivera recalls.

It turns out Rivera did find something: COE wasted more than half a million dollars of public money that could have benefited foster youth in Santa Clara County.

In February 2008, the COE’s division of Foster Youth Services inked a contract with Terben Inc. to build a state-of-the-art database to track children and young adults whose life circumstances had left them without responsible parents or legal guardians. The program was called the Foster Youth Information Network and would later go by the acronym FYSIS.

Foster youth, perhaps the county’s most vulnerable residents, currently account for 1,289 children and youth under age 21. Many have been victims of absentee parents and abuse, and their rates of homelessness, drug addiction and/or incarceration are substantially higher than the average young person. In early 2008, the county was setting out on an ambitious plan to keep foster youth from falling through the cracks.

Terben promised its database would do everything from identify how many foster youth are in the county to drilling down to specifics, such as how many children receive special education courses, if they’re performing at grade level, what schools they have attended, how many have been held back a grade and if they’re even making it to class.

“The basics,” Rivera said. “But the basics would have been a huge step.”

Unfortunately, by the end of 2011, the COE had terminated its contract with Terben and spent more than $565,000 without ever establishing a fully functional database. Making matters worse, interviews based on Rivera and San Jose Inside’s Public Records Act requests show that the COE suspended several foster youth programs—including tutoring—during the same time it was misspending this money.

A closer look at the actions of administrators in charge of launching the COE’s foster youth database during the period of 2007-2011 reveals that some may have had conflicts of interest, while others jumped ship, were asleep at the wheel or unable to overcome bureaucratic obstacles. Perhaps most troubling, there are signs that a shell game may have been at play with state and federal grant money to cover up costly mistakes.

For the last year and a half, Rivera said, he has taken his information and shown it to a variety of people in positions of power. Administrators, county board of education trustees, staff for county supervisors and others—nearly all of them showed interest but eventually begged off. Many noted that the situation deserved answers but fell outside of their purview.

“I feel like I’ve exhausted all resources,” Rivera said. “Anyone who does what we do acts ‘in loco parentis,’ which means we’re in the place of the parents. We have to ensure the children are provided the services they’re entitled to.” 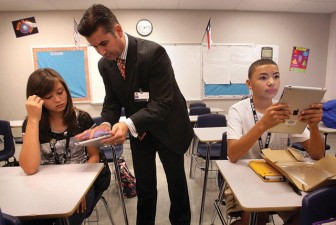 Xavier De La Torre was the third superintendent in the last seven years to leave the county Office of Education under a dark cloud.

Why the COE even contracted with Terben to build a foster youth database is still an unanswered question. What’s clear, however, is that the office in charge of corralling all 32 of Santa Clara County’s school districts has been plagued by dysfunction. And transparency in reviewing what went so wrong has often been viewed as a task better left to successors.

Three COE superintendents have left the COE under less than ideal conditions in the last six and a half years. In October 2007, Colleen Wilcox resigned from the post after 14 years amidst hostile work environment complaints. Joe Fimiani held the role on an interim basis for eight months before ceding the job to Chuck Weis, who was well-liked by underlings but seen as inept by board of education trustees. On his way out the door, Weis left the county on the hook to make payments on a $900,000 condo he lived in during his three-plus years as superintendent. The most recent departure occurred in March, when Xavier De La Torre lasted all of 21 months before hightailing it back to El Paso, Texas, where he took control of a school district neighboring the one he left to come to California.

COE’s lack of stable leadership, coupled with staff turnover, has allowed some contracts to avoid thorough vetting and project deadlines to be missed. Coordination between the COE and local school districts also fell through the cracks. Another factor in Terben’s failure was COE’s inability to get school districts to sign memorandums of understanding (MOUs) to hand over foster youth records. Only three of 32 school districts appear to have signed MOUs for the project before the fall of 2010—making it nearly impossible to get the ball rolling on data collection.

“The relationships between the districts and the county are a little more challenging than to get people to walk in and agree to try it out,” said Kelly Calhoun, the chief technology officer for COE, who spoke with San Jose Inside before the COE’s communications department blocked interview requests up until just before this story went to press. Calhoun came to the office in late 2009 and has been working with a team of in-house programmers for the last year to roll out a new foster youth database called Foster Vision. Adding complications to completing the previous database was getting the Department of Family and Children’s Services (DFCS) and the Juvenile Probation Department (JPD) on the same page.

But according to records San Jose Inside has obtained, a simple background check of Terben’s references should have indicated a potential conflict of interest, while also throwing the company’s track record into question. The COE, with the help of its Foster Youth Services (FYS) consultant Tracy Fried, put its database idea out for bid in late 2007. Fried had previously served as the FYS coordinator for San Diego County’s Office of Education from 2000-2005.

In Terben’s bid, the company cited FYS databases it had created for San Diego and Riverside’s respective county education offices. What the bid failed to mention was that Terben’s database in San Diego was deactivated within just several months of going live in 2005—a full two and a half years before Santa Clara County would even sign a contract with the company—and Riverside’s contract was only a few months old.

Michelle Lustig, who took over Fried’s role in San Diego in the summer of 2005, told San Jose Inside that Terben’s work fell short almost as soon as she came on to the job.

“I came into my position and discovered it was insufficient,” Lustig said. “One of the things that I discovered very early on was it didn’t have the firewall protection required. I saw the vulnerability of the data. It was web-based, and could be accessed by anyone, anywhere.”

San Diego’s office began work to design its own database in November 2005, Lustig said. But in 2007, a full two years later, it seems no one in the COE ever bothered to contact her for a progress report. That could be because Fried was aggressively pushing for a reunion with Terben and its CEO Chris Benson, who she described in a phone conversation with San Jose Inside as a “database guru.”

“I couldn’t have been more of a reference,” Fried said. “I was the reference. I was the lead for Santa Clara County.”

In just eight months of consulting work for COE in 2007, Fried received $122,000. She remains proud of that work, even if it resulted in a terrible waste of public money. Sonja House, who declined multiple requests for an interview, succeeded Fried as FYS coordinator in December of that year. Based on internal reports and emails, House’s oversight has been highly questionable. Terben’s communications presented early red flags, such as a March 2008 email in which CEO Chris Benson suggested to House that any discussion of costs could kill the project.

“I would use the utmost discretion when discussing any level of detail on the project, particularly financing,” Benson wrote. “We can only talk ‘ballpark’ and estimates as there has been very little if any sort of project discovery done in your county. Talk of on-going costs is premature and distracting from the most immediate needs. É More detail brings more questions and risks putting this project into analysis paralysis.”

Two years after that, it was apparent Terben would not meet its rollout goals by 2011. Mark Ashley, an employee in the COE’s Regional Technology Center, audited Terben’s progress in a damning March 24, 2010, report. In his findings, Ashley questioned how the company’s bid was accepted in the first place.

“Of the research that was done at the time Terben had a one-page website and no product information on its website just a name and an email address [sic],” he wrote. “The organization was not promoting or selling a product at the time.”

Fried told San Jose Inside that she was so confident in her past experience with Terben, despite knowing the company’s database was no longer live in San Diego, that in making her reference she never bothered to look at the company’s website.

“I don’t even know (if it had one page),” she said. “I never looked at Chris’ website.” Benson told San Jose Inside that his website had more than one page.
Ashley later concluded in his report: “Terben and the COE and its partners have advocated an expansion for a system that is as yet incomplete. Stuck at phase 3 and a year late already the scope is being worked out to spend another $400k.”

Lustig told San Jose Inside that no one ever contacted her for a reference on the company’s work.

Leon Beauchman, a 14-year trustee and current president of the county board of education, told San Jose Inside, “Certainly the fact that [Terben’s] system wasn’t working raises some concern.”

Fried argued that it was COE administrators who “dropped the ball,” and she also challenged Lustig’s version of events, claiming that San Diego’s COE dismantled a perfectly workable database.

“It worked out phenomenally,” Fried said. “I honestly get disgusted and outraged at the shit that went down (in San Diego). They recruited me from the [Los Angeles] Board of Education and my work is my heart and soul. Unfortunately, imagine if you left and all the great work you were doing; and they’re self-serving. It was horrible. You have no idea how political it got.”

Fried said that San Diego administrators wanted her to include more security protection to the database—a concern that was also raised here in Santa Clara County—but she refused. “My agency had wanted me to change it, so they felt more comfortable with the system,” she said. “But I’m not going to spend $20,000 for no reason.”

Compared to the extra costs Santa Clara County was billed by Terben, in what appears to be a failure to terminate its contract in a timely manner, $20,000 would have been getting off light.