Palantir Technologies got its start with millions in funding from the CIA’s venture capital firm and has since made vast fortunes from government contracts. But the Palo Alto-based $20 billion data analysis firm has tried to distance itself from the Trump administration’s immigration detention, deportation and family-separation policies.

When the New York Times last year reported that the U.S. Immigration and Customs Enforcement (ICE) renewed a $38 million contract with the company, Palantir sent a statement to reporters that claimed its services were narrow in scope. Its work, Palantir insisted, has nothing to do with ICE’s Enforcement and Removal Operations (ERO), which “is responsible for interior civil immigration enforcement, including deportation and detention of undocumented immigrants.”

“We do not work for ERO,” company officials said.

Rather, they explained, Palantir’s contract is limited to ICE subsidiary Homeland Security Investigations, which handles domestic and cross-border criminal matters.

Turns out, Palantir was being less than truthful about its relationship with ICE. Documents recently unveiled by The Intercept showed that the Silicon Valley Big Data behemoth was more involved with detention and deportation than it let on.

The revelations renewed backlash against Palantir, prompting protests in recent weeks throughout the U.S.—including outside the company’s South Bay hub.

On July 12, immigrant advocates gathered at Palantir’s Palo Alto headquarters, demanding that the company shut down entirely. The firm founded in 2003 by billionaire PayPal alumnus Peter Thiel was first awarded a $40 million contract with ICE in 2014 to develop an electronic case-management database. 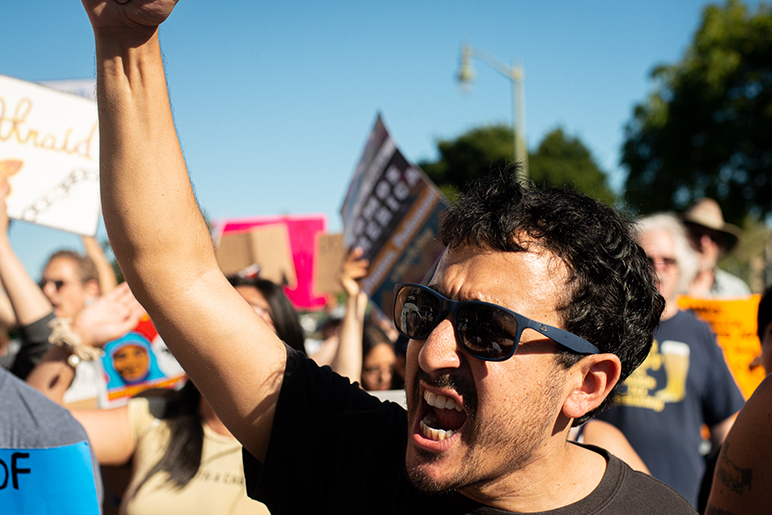 Hundreds of people showed up to last week’s demonstration outside the Palantir HQ. (Photo by Nicholas Chan)

Activists blamed Palantir for helping the President Donald Trump separate families in at the U.S.-Mexico border, citing those newly released documents showing how ICE used that case-management software in a 2017 op that targeted unaccompanied children.

“Let’s stop companies like Palantir who are responsible for the separation of families along the border,” Sindy Flores, an asylum seeker, demanded at the rally last week. “My daughter was detained in Texas for more than one month.”

Flores, whose partner is also detained at the border, said their 7-year-old daughter has been afraid of people ever since authorities separated her from the family. Until ICE releases them, she said she remains stranded in San Francisco without a partner to care for their three other children.

Palantir is one of many companies under intense scrutiny for its involvement with ICE. Amazon employees have also demanded that the e-commerce giant cut ties with Palantir. Last month, 500 employees from Wayfair, a home goods company that sold beds to detention centers in the Southern U.S. border, walked out of their Boston headquarters.

Local governments that pride themselves on their sanctuary policies have also come under fire for dealings with Palantir.

Last year, San Jose Inside reported that Santa Clara County has contracted with Palantir since 2015, using its software to track outcomes for homeless clients through its Office of Supportive Housing and Behavioral Health Services Department.

“Santa Clara County could pressure their contractor to do what is socially and environmentally justifiable,” Nassim Nouri, a member of the Santa Clara County Green Party, said when asked for comment. “Our government over the decade has failed asylum seekers and immigrants. I don’t think it’s only Trump. The Obama administration was the first to use detainment as a method of deterrence for asylum seekers.”

But Trump’s zero-tolerance approach has further fueled the border crisis and ramped up family separations. Under current federal policy, parents are prosecuted while their children are placed in the custody of relatives, foster homes or shelters. Though Trump reversed the policy amid public outcry last year, the consequences remain far reaching.

According to a report released by Congress last week, more than 2,468 children have been separated from their families by this presidential administration.

Rep. Anna Eshoo (D-San Jose) visited the border this past weekend, and said little has improved since her last trip in 2018. “The conditions I witnessed at the border were inhumane,” she said in a statement to reporters. “Forty or more detainees are being kept in cells built to house a maximum of eight people for days or even weeks, and children are without access to proper hygiene.”

Until Silicon Valley is held accountable for aiding and abetting the infrastructure responsible for the humanitarian crisis at the border, local activists say they plan to continue marching in the streets and otherwise sounding the alarm.

But as long as there’s money to make locking up asylees indefinitely, it’s unlikely that the tech industry will abandon those lucrative contracts.