Last December, the San Jose City Council took a unanimous vote to sell acres of its own land to Mountain View-based Google. Ten months later and the tech giant has officially submitted plans to the city for its downtown mega-campus.

Now that the application is in the San Jose Planning Department’s hands, the project will embark on a year-long public engagement and environmental review process, culminating in a vote by the council in late 2020. 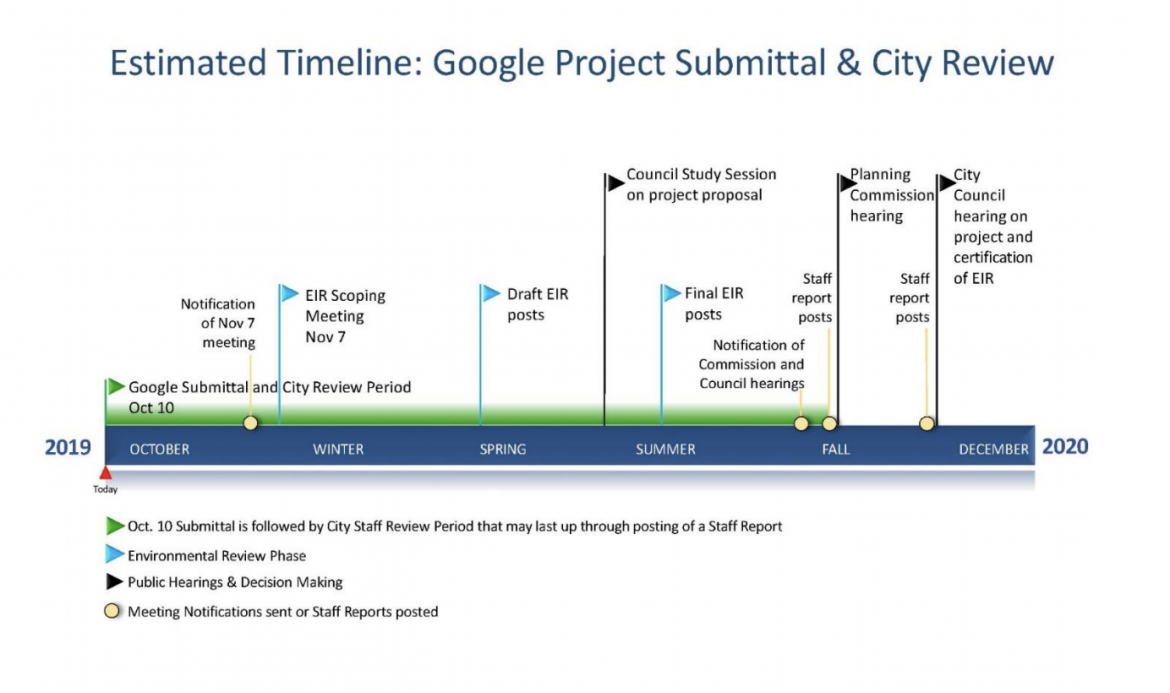 At a number of community meetings in August, Google presented a blueprint of the campus. Since then, not much has changed.

While those metrics remain part of Google’s plan, company spokesman Michael Appel said the newly filed application budgeted some extra square footage and housing units. Because California law requires cities to study the environmental impact of the project, he explained, Google gave itself a little bit of wiggle room for changes down the line.

The submission also allocates 5,160 parking spots for the public, nearby residents and Googlers. Appel, however, emphasized that the company is focused on people, not cars—especially with the numerous future public transit options like VTA, BART, Caltrain and high-speed rail. The campus also aims to be bike-and-pedestrian friendly. Google plans for protected bike facilities, new off-street paths along Los Gatos Creek and guarded bike lanes. Surrounding streets will also undergo traffic calming measures.

Earlier this year San Jose council members made a pivotal decision by upping building heights downtown in an effort to maximize density in the city’s core. Google’s project happens to fall into that zone. While existing height limits range between 65 and 135 feet, the new tech hub could soar from 160 to 290 feet high.

The review process is slated to kick off Nov. 7 with a public scoping meeting and a months-long assessment period to identify any potential impact the project would have on the environment.

Despite Google prefacing the official plans with a number of community meetings, some residents still have concerns.

“While Google has made important steps acknowledging their impact, I worry this plan still lacks details on the public’s number one concern: what Google will do to protect the thousands of families struggling to afford housing in San Jose from displacement if Google’s arrival causes rents to soar,” said Chava Bustamante, an organizer with labor-backed nonprofit Silicon Valley Rising. “There is no more time to wait, we’re ready to engage in pulling a plan together to prevent displacement and bring our families and our community the peace of mind they deserve.”

“I think DANG is supportive of downtown San Jose evolving and that also includes the standards for what development in this area looks like and a cohesive nature in development,” DANG consultant and Silicon Valley Synergy principal Bob Staedler said.

The group has met with Google and, according to Staedler, plans to “advocate throughout the process and be a resource.”

Business leaders are also celebrating the submission of a project that they say will make San Jose more vibrant. “We are excited to see Google moving ahead with a formal application that brings much needed jobs, housing and  community gathering spaces to downtown San Jose,” Matt Mahood, president and CEO of the Silicon Valley Organization (SVO, said.“The SVO and broader business community are ecstatic to see Google invest in the capital of Silicon Valley with a smart and holistic mixed-use project.”