Google and San Jose on Tuesday released a long-awaited proposed development agreement for a massive, mixed-use office campus that could rise around Diridon Station.

The agreement outlines the campus, called Downtown West, that Google wants to build in the 10th largest city in the country, but also the $200 million community benefits package and about $1 billion in other “features” it’s willing to offer up in exchange for the green light to construct the new campus.

Those offices, some of which could reach about 290 feet high, would be surrounded by 4,000 new homes, a spate of hotel rooms and 500,000 square feet of retail. All of that would sit within about 80 acres around the city’s transit hub that officials hope will eventually become one of the busiest transit stations on the West Coast where light rail, Caltrain, BART and high-speed rail would intersect, carrying 100,000 daily passengers.

“I’m proud that together with the City of San Jose, community, and local organizations we developed a project agreement with community benefits that focus on social equity and will help San José come back stronger from the pandemic’s impacts,” said Alexa Arena, Google’s San Jose development director. “Downtown West is a great example of a new way to approach development, where community is placed front and center.”

If completed, the mega-campus could employ around 25,000 people, according to Google. Those jobs, along with the tax dollars and the community benefit money the company has promised would offer a life-line to San Jose as it—and cities across the country—recover from the Covid-19 pandemic, Mayor Sam Liccardo said.

“This makes San Jose a national model for how we can rebuild equitably after this pandemic as cities throughout the country will be struggling mightily to address epic levels of unemployment and dislocation in their communities,” he told San Jose Inside. “San Jose is finding the path through this partnership and one that will pay benefits to our surrounding community for many years to come.” 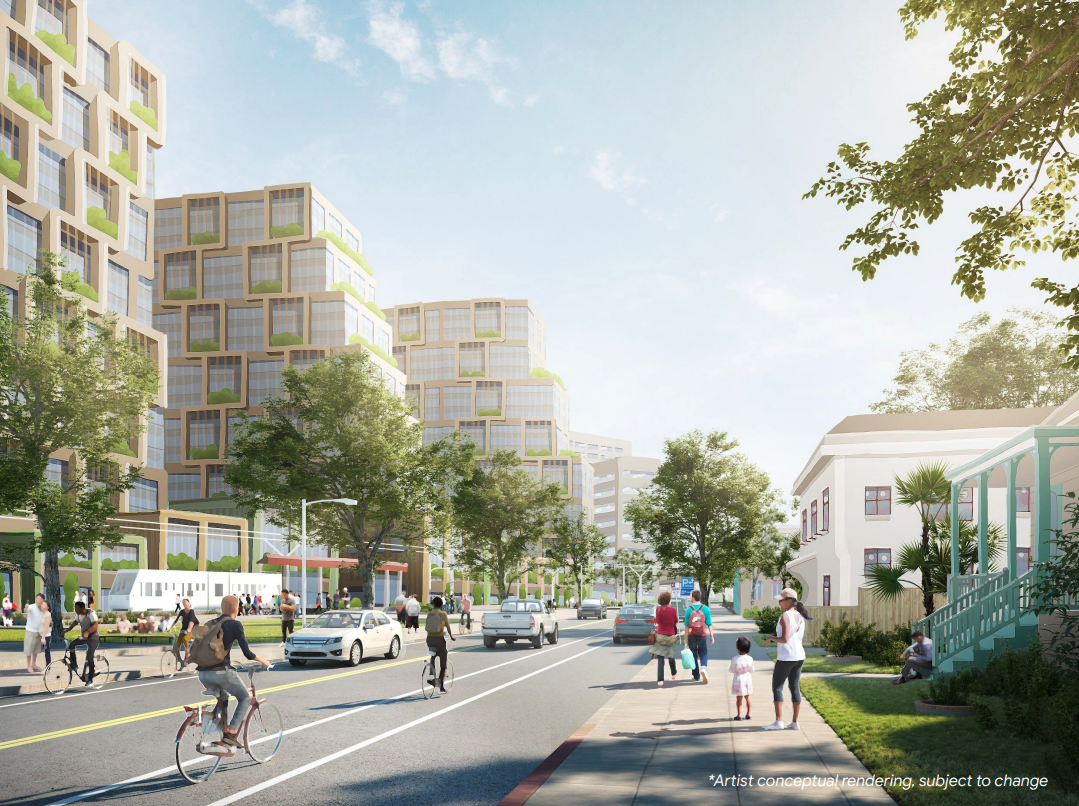 A rendering of Google's Downtown West development along San Fernando. (Courtesy of Google)

Part of that path includes about $200 million in community benefits promised by Google, including a $150 million nest egg called the Community Stabilization and Opportunity Pathways Fund. Google will contribute money to the new fund as it builds its project, contributing about $21.2 million for every 1 million square feet of office space completed, according to city data.

The project will likely take more than a decade to build, but some money would be approved up-front if Google gets the final approval on the development from the city’s elected officials, according to Google and city data.

As money comes into the fund, a third-party would manage it while a committee made up of residents would advise how the money should be spent, focusing on things like historically underrepresented communities, affordable housing, homelessness prevention or services and small business assistance.

The development agreement also comes with a promise to use local and diverse businesses to construct the project. Google also says it will gift the city nearly an acre of land ripe for affordable housing and build about 1,000 affordable homes in its own residential buildings.

“We are excited that Google’s announcement today includes a big commitment to housing in the Downtown West proposal,” Leslye Corsiglia, executive director for nonprofit Silicon Valley @ Home said. “As housing advocates, we hope this action serves as a catalyst for housing development in the … Diridon Station Area, which has the capacity to add up to 15,000 new homes.”

The tech giant has promised to host field trips, career days, and computer science workshops for students that come from underserved communities to promote STEM careers to students.

The development agreement is the result of years of negotiations, not only with the city, but also with community groups that emerged in recent years to tell Google what they wanted from a campus rising on the west end of the city’s downtown.

A key request was around parks, public art and retaining some buildings of historical significance. About 15 acres of parks, plazas and trails would weave throughout the 80-acre development, according to the development agreement. The Diridon Area Neighborhood Group [DANG], a community led collective is happy about that.

“DANG appreciates Google’s willingness to work with neighbors now,” said Bob Staedler, a spokesperson for the group. “They’ve laid the groundwork to create a long-term positive working relationship with all area stakeholders. DANG also appreciates Google’s contribution to new and existing parks and the programs that will benefit the broader community.” 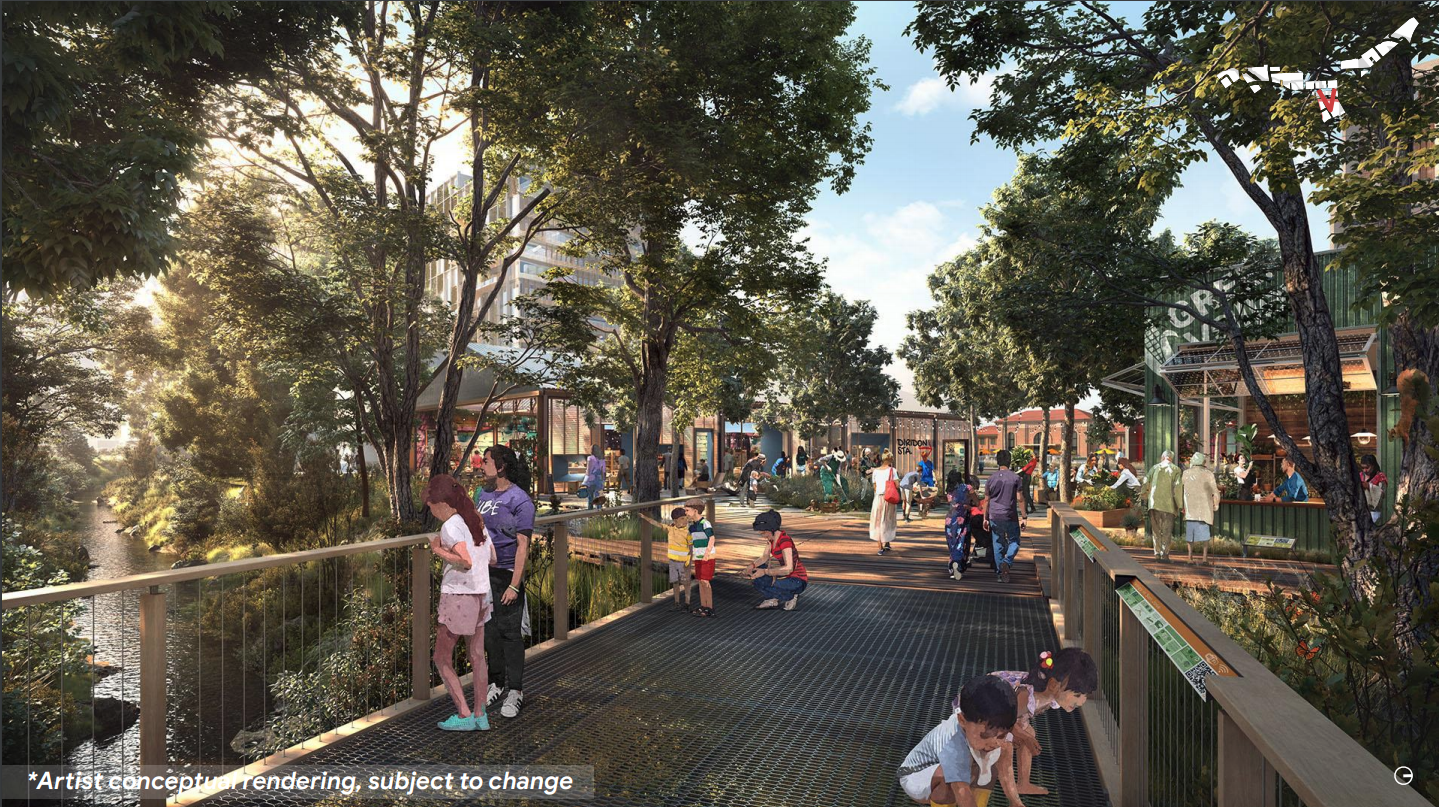 A rendering of Google's Downtown West development. (Courtesy of Google)

It’s been nearly four years since San Jose officials gathered in a parking lot near the iconic Stephen’s Meats “dancing pig” sign to announce that the rumors were true: Google was considering a massive, mixed-use corporate campus in the city’s Diridon Station area—possibly up to 6 million square feet—and it could replace or reinvent the industrial-looking backdrop they stood before that day.

The project, if it came to fruition, would be a boon for San Jose, promised Mayor Sam Liccardo and other city council members standing side-by-side behind a portable podium. But first, they’d kick off negotiations with the tech giant to come up with a series of agreements about the potential development. Nothing was for-sure, city officials repeated.

Even so, the buzz, excitement and—for some wary residents—dread the June 6, 2017 announcement set off hasn’t let up, even in the middle of a global pandemic.

Since then, the project has grown steadily. Today, the office space alone that Google proposes would surpass the 6 million square feet the company reportedly envisioned for the overall development in 2017.

Now the question is whether it will be approved after almost four years of negotiations and an overhaul of the zoning guidelines and boundaries for the 262 acres around Diridon Station that will also be up for a vote this spring.

San Jose council members are tentatively expecting to vote on the development agreement May 25.

Before then, residents will have several chances to hear the details. The agreement will be presented on April 14 to the Station Area Advisory Group (SAAG), the committee tasked with recommending changes to the zoning and design guidelines around Diridon Station.

After that, an April 17 community meeting will precede an April 28 Planning Commission meeting to go over the details of the agreement.

Read the development agreement on the city of San Jose website. 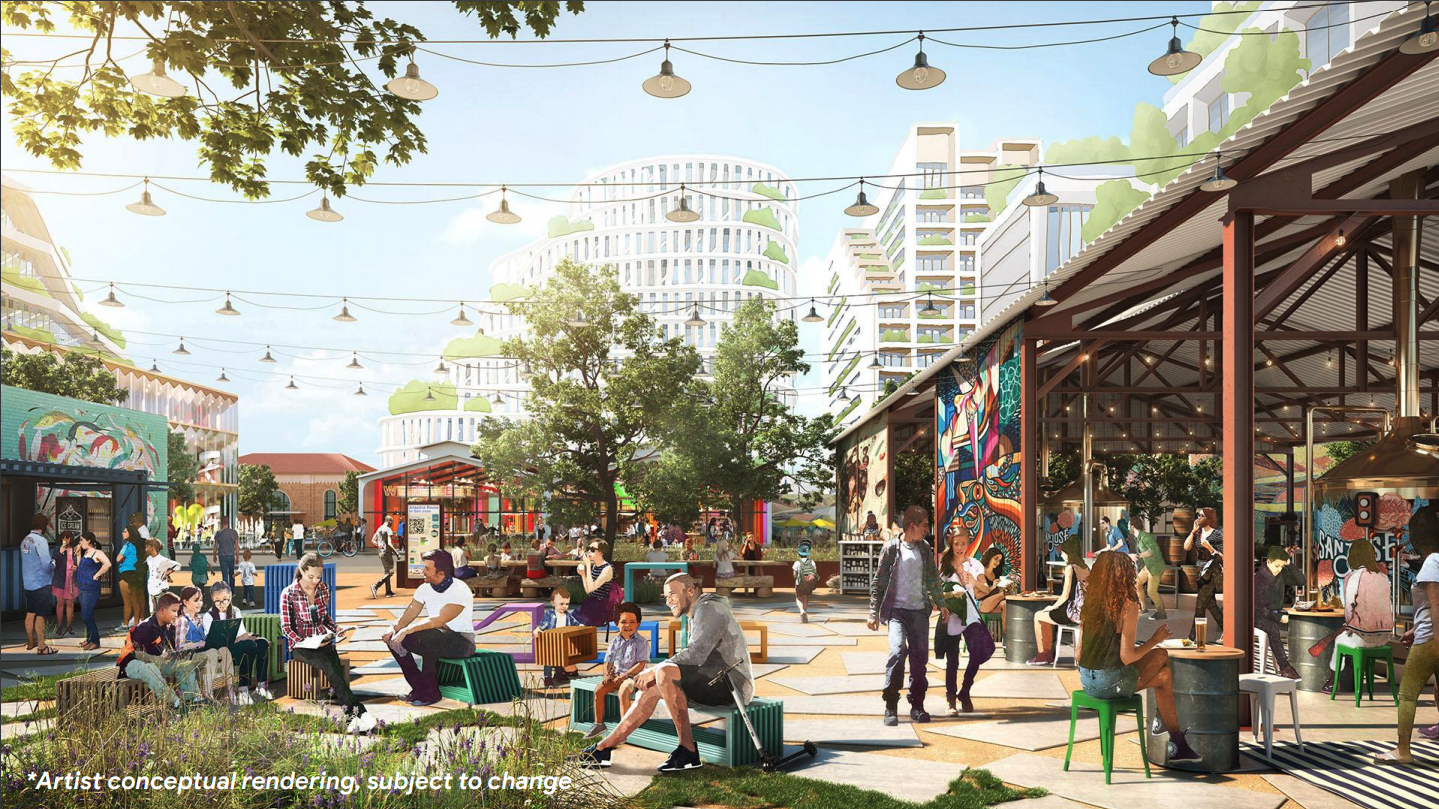 A rendering of Google's Downtown West development along Autumn Street. (Courtesy of Google)