San Jose Unified School District has been caught in the crosshairs of a lawsuit over the way it handled a sexual assault complaint filed by former female student.

“Jane L.C. Doe”—the anonymous plaintiff who attended Leland and Pioneer high schools in 2017 and filed the civil case in Santa Clara County Superior Court this past spring—accuses district officials of negligence and intentionally inflicting emotional distress after she reported being sexually assaulted by a classmate.

The lawsuit describes how in September 2017, Doe was molested by a classmate at a mutual friend’s house. “[A]s the evening progressed, she became tired, laid down and fell asleep on a couch at the residence; that she awoke to her clothing having been removed from her lower body by a fellow classmate at Leland High School on top of her with his fingers inside her,” the claim states.

The following month, Doe says she became the “target of of ongoing harassment, bullying and intimidation by the assailant and his friends.”

An unnamed student reportedly alerted Leland High administrators, prompting Assistant Principal Mary Ann Dougherty to call Doe into her office. A San Jose police officer was also present, according to the lawsuit, but Dougherty allegedly refused to let Doe bring a parent to the meeting.

“Dougherty demanded that plaintiff discuss the sexual assault with her and the police officer, at which time Dougherty refused to allow plaintiff’s mother to be present, despite plaintiff requesting her presence, and proceeded to ask accusatory questions and infer that plaintiff was not remembering things accurately, that she was not sexually assaulted and/or that she had brought the sexual assault upon herself,” the complaint alleges.

The lawsuit goes on to say that Dougherty justified questioning Doe without a legal guardian present because the girl “was the victim and not her mother.”

Still, Doe continued to talk freely with the vice principal about the harassment she endured. She “disclosed to Dougherty that the assailant and his friends who were harassing, bullying and intimidating her were students at Leland High School, including some who were in her individual classes, and provided Dougherty with the names,” according to the lawsuit’s summary of the meeting.

Doe also told the vice principal that the alleged assailant took photographs and video of her naked body without her permission. When the victim told that part to Dougherty, according to the lawsuit, the vice principal responded by admonishing the girl.

“Be careful what you say,” Dougherty reportedly cautioned, telling the girl that she may get “in trouble” for accusing the alleged assailant of having illicit images. 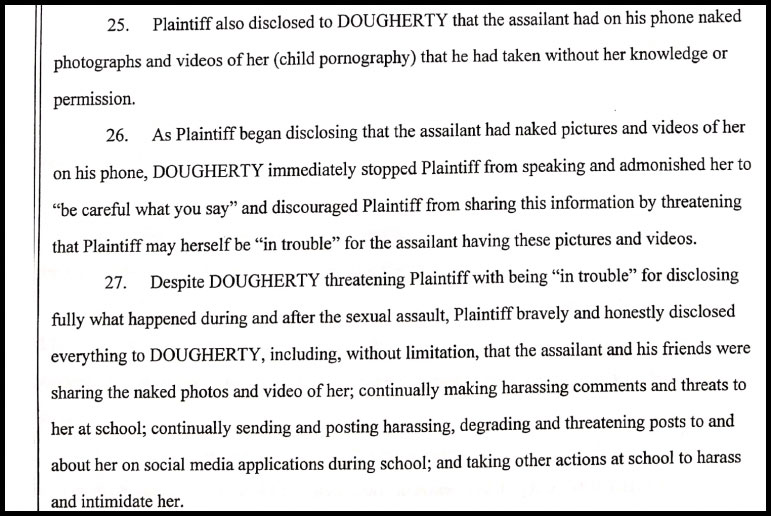 Dougherty allegedly told Doe to “be careful what you say” when she revealed the assailant had naked photographs and videos of her. (Source: Jane L.C. Doe vs. San Jose Unified School District)

After that meeting, Doe says the assistant principal did nothing to prevent the accused assailant and his friends from continuing to harass her.

“The assailant and his friends remained in plaintiff’s classes, continued to attend classes without repercussions, and were allowed access to their phones and the school’s WiFi networks all while continuing to sexually harass, bully and intimidate plaintiff at school,” according to the lawsuit, “and any actions that Dougherty did take only resulted in additional harassment, bullying and intimidation.”

The plaintiff’s mom says she even turned to Leland High Principal Brad Craycroft for help, but he acted like he knew nothing about the situation. She says he promised to investigate, but that he, too, did nothing to stop the bullying and harassment.

Absent any consequences, the male student accused of attacking Doe allegedly sexually assaulted yet another Leland High classmate in November 2017. The lawsuit says the boy was arrested on campus on Feb. 14, 2018, for both assaults.

Meanwhile, SJUSD Superintendent Nancy Albarrán allowed Doe to transfer to Pioneer High to finish her junior year. But the girl and her family claim that the harassment continued via texts, SnapChat and Twitter during school hours because district officials apparently failed to inform the new high school about the reason for the victim’s transfer. Thus, Pioneer High had no idea it had an obligation to shield the girl from abuse.

After the boy’s arrest, the harassment perpetrated by his friends allegedly escalated once again, causing the girl’s grades to suffer as she skipped school and suffered bouts of depression, anger and anxiety. In response, Pioneer High administrators developed a plan to boost her grades, which included dropping an AP history class and giving her six weeks to improve her academic performance.

Doe’s attorney says SJUSD’s failure to protect the victim deprived her of the education to which she’s legally entitled.

“Defendants had the authority and the ability to obstruct or stop the assailant’s and his friends’ harassment, bullying and intimidation of plaintiff, but negligently and/or willfully failed to do so,” the complaint reads. “This failure was a part of defendants’ plan and arrangement to conceal wrongful acts, to avoid and inhibit detection, to block public disclosure, to avoid scandal, to avoid the disclosure of their tolerance of on campus sexual harassment, bullying and intimidation and abuse.”

James Penning, one of the lawyers representing Doe, tells San Jose Inside that the school district has “policies and procedures in place to protect its students who report sexual assaults, sexual harassment and/or bullying.” It simply didn’t enforce them, he says.

“Here, SJ Unified failed to follow those policies and procedures and chose to blame and punish the victim rather than the offenders for the crimes committed against her,” Penning adds. “This is not acceptable, and we cannot continue to tolerate it.”

Since the incidents alleged in the lawsuit, Dougherty continues to work for in Leland High’s administration and Craycroft has been promoted to a district-level position as manager of curriculum and instruction.

SJUSD spokeswoman Lili Smith says the district, as a rule, doesn’t comment on the “specifics of ongoing litigation.”

“However,” she says, “I can assure the entire community that we take any allegations of employee misconduct very seriously and we vigorously protect the safety and well-being of our students. Upon being informed of a concern, San Jose Unified acts immediately.”

Doe and her family—whose attorneys are still negotiating a settlement with the district—contend otherwise. The parties are scheduled for further case management in December. 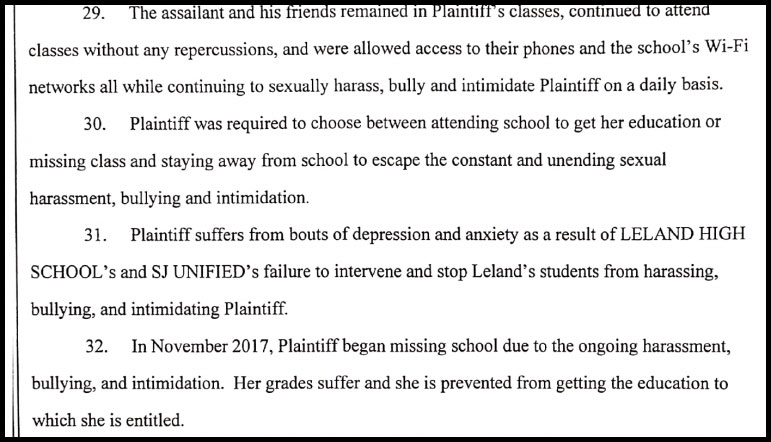 Doe says she suffered from depression and anxiety after “Leland High School and SJ Unified fail[ed] to intervene.”