As San Jose drafts new rules to protect renters from no-cause evictions, some of the city’s elected leaders also want to prevent landlords from discriminating against recipients of housing subsidies.

The proposal, going before the City Council on Tuesday, comes in response to a report that describes the difficulties of finding housing in one of the most expensive real estate markets in the nation. Called the Analysis to Impediments to Fair Housing, the federally mandated study identified bias against people with government-funded rent vouchers as one of the biggest concerns of the city’s low-income renters.

“The challenges facing voucher holders are no doubt exacerbated by the very high rents tenants face in the current market, but it is sometimes the case that even when a voucher holder can afford the rent for a given apartment, they will be rejected because of the fact that they hold a voucher,” Vice Mayor Magdalena Carrasco and council members Tam Nguyen, Don Rocha, Sylvia Arenas and Raul Peralez state in a shared memo. “This practice can make it even more difficult for voucher holders to find a place to live.”

Those same council members backed a historic vote last week to prevent landlords from denying lease renewals unless they cite one of a dozen justifiable causes, including non-payment or property damage. The council will vote on May 9 whether to implement the policy right away or to wait a few months before rolling it out. Until then, tenants whose leases expire won’t be protected by the so-called “just cause” ordinance.

The council members proposing the anti-discrimination measure note that Santa Monica was sued over a similar ordinance in 2015. But a court upheld the city’s law earlier this year. “Any future court decisions may be an important factor in evaluating the feasibility of the ordinance,” the shared memo states.

The fair housing report, which the U.S. Department of Housing and Urban Development requires from cities that receive federal funding, also points a growing concern about gentrification and displacement.

“Due to rising housing costs over the last several years, residents in low and moderate income neighborhoods have experienced displacement,” according to the report authored by San Jose’s Housing Department, which is helmed by Jacky Morales-Ferrand. “The displacement is expected to continue, particularly in neighborhoods with accelerating growth and new development.”

In the report, Morales-Ferrand points to data from the Urban Displacement Project at the University of California, Berkeley, which found that more than half of low-income households live in gentrifying neighborhoods. In San Jose, the neighborhoods most at risk of displacement include Japantown, Luna Park and Little Portugal.

Local renters responding to a survey for the report said the highest priority for the city should be to increase the supply of affordable housing stock and to provide more rental assistance to the homeless. 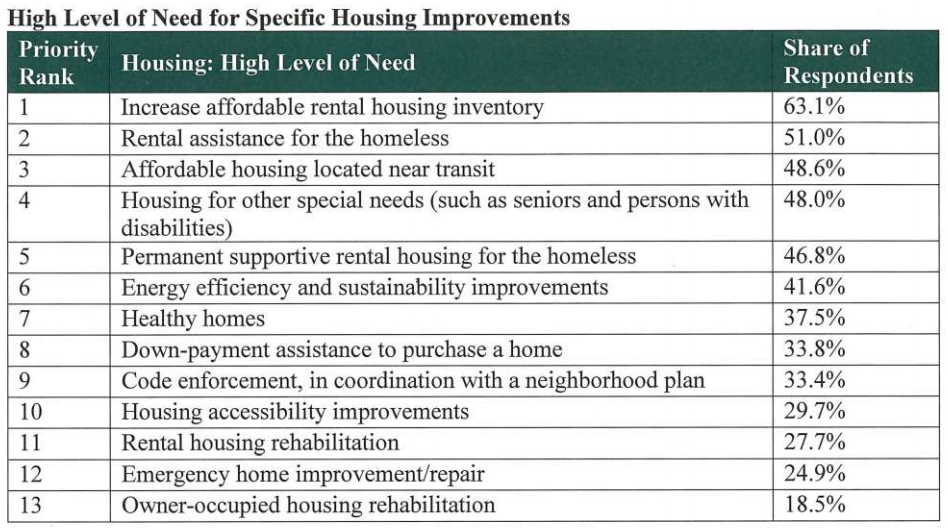 The report also offers an interesting snapshot of the city’s changing demographics and housing characteristics, including an overall population growth of 6 percent over the past decade. Nearly 80 percent of the city’s population is below the age of 54, but seniors are by far the fastest-growing age group.

About half of all households consist of small families and 8 percent include disabled residents, while 38 percent are designated as low-to-moderate income (up to $75,700 for a family of four). Increasing costs have spurred overcrowding in about 9 percent of households, predominantly among those with the lowest combined income. While 15 percent of rental households report living in overcrowded conditions, that figure grows to 58 percent for those earning less than 80 percent of the area’s average median income.

In the past decade, median income actually fell by 13 percent (adjusted for inflation), while the median home value and rent skyrocketed by 46 percent and 28 percent, respectively. Though the combined variables make it difficult for all low-income and moderate-income renters, the report found that black, Latino and Pacific Islanders face disproportionately higher barriers in finding affordable housing.