Sickened by blood cancer, Dick Kavanagh should have done little more than rest and regain strength. Doctor’s orders. But a looming eviction left him no choice but to hustle.

In August, his landlord served him a three-month notice to vacate, which gave him until this week to leave the duplex where he lived for the past five decades.

As the deadline neared, the wiry 76-year-old handyman spent up to nine hours a day searching for a new home. A little more than a week ago, Kavanagh was hospitalized for a bowel blockage and has spent the time since in the intensive care unit recovering from surgery. On Monday, he regained consciousness, but was still wracked with anxiety about where he and his wife, 80-year-old Helen Kavanagh, would go.

“You know, he worried a lot about it,” says Helen, who suffers from her own ailments, including diabetes, vertigo and gout. “He was out every day from 7[am] to 4[pm] trying to find a place. I think it took a toll on him.”

Helen, seated on her couch in the couple’s south San Jose duplex, lets out a heavy sigh. She worries about their dog Rosie, a yappy little Maltese-Shi-tzu that eats only when Dick feeds her. “I don’t want her to die,” Helen says, choking back a sob. “I don’t know what to do about any of this stuff. He took care of all this.” 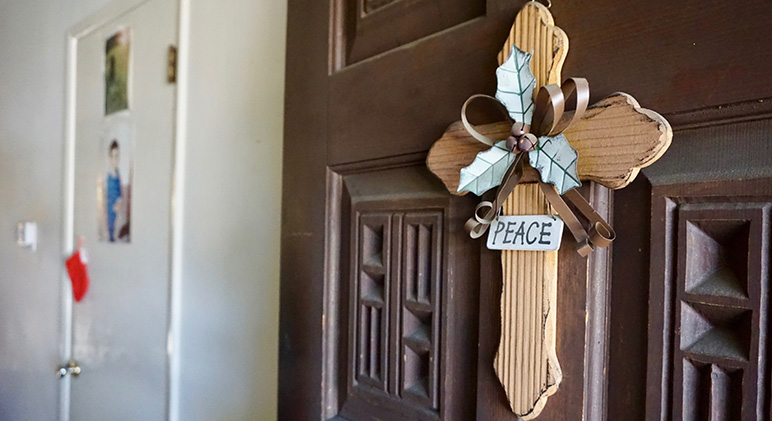 The Kavanaghs raised their children in a duplex they’ve called home for five decades. (Photo by Jennifer Wadsworth)

The Kavanaghs’ eviction is one of a myriad displacements in San Jose, where a booming tech economy has spurred among the worst affordability rates in the nation. But the city’s most vulnerable residents—undocumented immigrants, single parents, people of color—bear the brunt of Silicon Valley’s housing shortage. As do a growing number of seniors on fixed-income. With the rapid aging of the population, combined with soaring living costs and stagnant incomes, the elderly lie at the nexus of the crisis.

Because long-term elderly and disabled tenants tend to pay cheaper rent, the buildings they live in have lower purchase prices and higher potential profit margins for real estate speculators, according to the San Francisco-based Anti-Eviction Mapping Project. Deferred maintenance by the original owner makes the property cheaper as well, which also makes it more lucrative to evict older tenants from a run-down duplex—like the Kavanaghs’—compared with new tenants in a well-kept building.

Though no similar study has been done in the South Bay, the Anti-Eviction Mapping Project found that in each year since 2012, roughly 70 percent of evictions from rent-controlled units in San Francisco displaced people who were elderly, disabled, or both.

Anne Sherman, whose nonagenarian father, World War II veteran Paul Mayer, was ousted from his apartment earlier this year to clear the way for a tenant with a profitable subsidy, calls the eviction of the elderly not only unconscionable, but also a health crisis.

“My dad just turned 93 last month and it was a birthday we never expected to see because since we moved him to his new apartment, his life turned into a downward spiral that he has never recovered from,” Sherman wrote to San Jose’s City Council on the eve of Tuesday’s vote to beef up tenant protections. “We don’t expect him to last much longer and I attribute 100 percent of his decline to his eviction.”

Marjaneh Hosseani, who works at Kaiser, bought the Carlton Avenue duplex a few years ago with plans to remodel the property. At the time, Hosseani told the Kavanaghs that she planned to move in her parents—ostensibly legal ground for eviction.

Even if the council expands its rent control ordinance to include duplexes, it’s unclear whether that would help people in a situation that the Kavanaghs face. If their duplex were under rent control, it would become subject to the Ellis Act, a controversial state law that grants only limited protection and still lets property owners remove longtime tenants from rent-controlled units under certain conditions. For example, seniors, who comprise a protected class under federal housing law, are allowed an additional year’s notice to find new housing when being displaced under the Ellis Act.

Councilman Don Rocha, whose district encompasses the Kavanaghs’ neighborhood, says he doubts much could be done beyond ad hoc advocacy for the couple.

“This seems like one of those cases that’s just extremely unfortunate, but it happens,” he says. “Landlords can move folks out if they’re trying to move in a family member. That is allowed. But it’s true that in this market, it’s extremely precarious for folks to find housing at a cost they had in the past.”

Jacklyn Joanino, a policy aide for Rocha who recently transferred to the city’s Housing Department, says she suggested that the Kavanaghs enter into mediation with the property owner. “That’s one of the services that is available to them,” Joanino says. “And my understanding is that their health conditions may merit accommodation.” 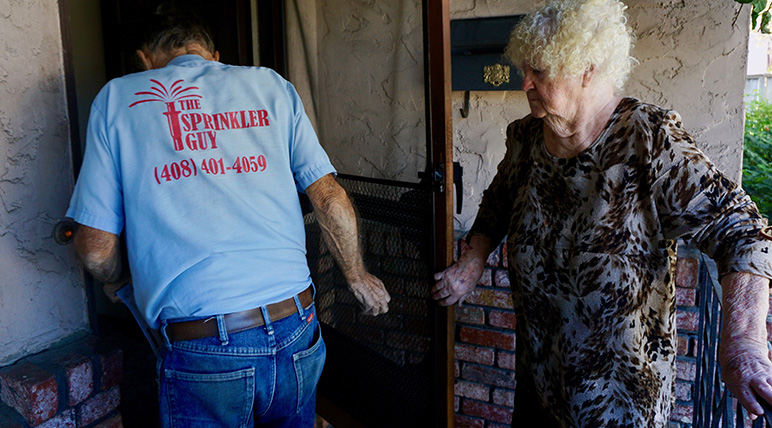 Dick and Helen have lived at their south San Jose duplex for nearly 50 years. (Photo by Jennifer Wadsworth)

Tenant advocates who spoke to San Jose Inside call it unethical for landlords to evict the sickly and elderly. Indeed, 100-year-old San Francisco tenant Iris Canada died this past March after a prolonged eviction battle. Fellow San Franciscan Carl Jensen died at the age of 93 after fighting for months to remain in his longtime home. The same city lost another evicted senior when 81-year-old Beatriz Allen died in April.

The AARP advises against evicting elderly tenants and urges landlords to find legal and social services to help deal with senior renters.

“Evictions or threatened evictions of elder tenants are often the result of a tenant’s deteriorating mental and/or physical capacity or from financial abuse or exploitation by others,” the nonprofit stated in a manual on the subject. “The mere threat of an eviction, especially for someone in frail mental and/or physical health, can be disastrous.”

With no comprehensive tally, it’s unclear how many seniors die during or after eviction. But advocates for the elderly say, based on the volume of cases they’ve been handling, that the number is vast and growing.

Thankfully for the Kavanaghs, an attorney from the nonprofit Senior Adults Legal Advocates named Beatriz Lopez urged the landlady to extend the move-out deadline. It also helped that Dick’s doctor, Jessica Nimjeh, wrote a letter to Hosseani about the severity of her tenant’s physical frailty.

“In light of the fact that he is currently receiving acute medical care, the issue of vacating his residence and relocating within the next few weeks would create undue physical and emotional challenges for him,” Nijmeh wrote. 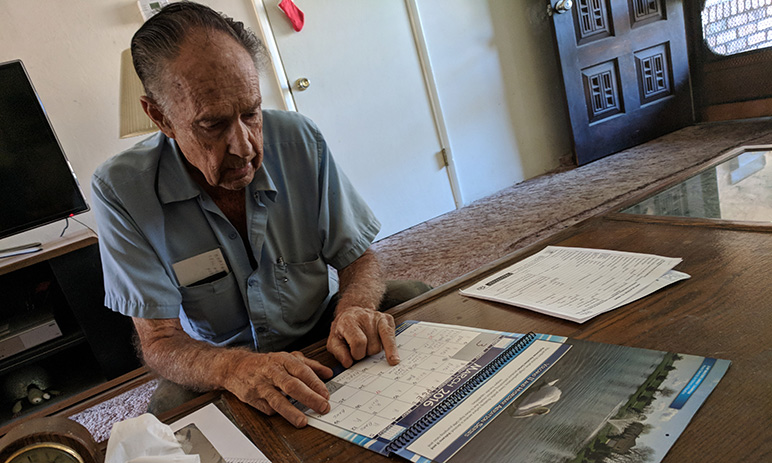 Dick Kavanagh reviews his calendar, where he marked dates when he witnessed construction on the next-door unit. Some entries simply say, “BANG,” to indicate an especially noisy work session. (Photo by Jennifer Wadsworth)

On Monday, Helen got a call from her husband at Kaiser, who was lucid again and eating broth and Jello. She got a second call from her landlady, Hosseani—who incidentally works at the same Blossom Hill-area Kaiser—announcing that she’d push back the eviction date to February.

While Dick’s illness bought him more time, it doesn’t prevent him from ultimately being displaced. Sherman suggests enacting a local policy that would curtail evictions for people over a certain age.

“These are the people on generally low fixed incomes that cannot readily or easily relocate,” she wrote to the council. “It’s horrific and heartless to expect someone over the age of 75 to have to find another home at this stage in their life where they have physical limitations and typically can’t even qualify to rent anywhere else.”

The lack of local age-based tenant protections could explain the sharp uptick in the number of homeless people over the age of 51 in San Jose, which grew by 175 percent from 2009 to 2015, according to the city’s census. Meanwhile, the Santa Clara County Medical Examiner-Coroner found that the region’s elderly homeless death toll rose by 320 percent from 2011 to 2016.

“Too often, the result of elderly displacement is death,” Shaunn Cartwright, a housing activist for local grass-roots group Rise Up for Justice, tells San Jose Inside. “Are increased profits worth that?”

The Kavanaghs, who originally paid $250 a month when they moved in as 20-somethings, pay $1,500 a month for the home where they raised their four children. Because they pay in cash or money order, however, they never built credit and have a hard time finding a new landlord who would accept such a blank slate.

About a week-and-a-half before his hospitalization, Dick—wearing a blue button-down shirt advertising his business, Dick’s Sprinkler Repair, with the phrase “The Sprinkler Guy” on the back—glares in exasperation at one of the myriad applications he brought home to fill out.

“They want to know how much money you got in the bank,” he says, aghast.

“I don’t think they have a right to ask us that,” Helen replies.

Rosie barks in the background.

Cartwright nods knowingly from across the living room.

“It’s a different ballgame now,” she remarks. “But you shouldn’t even have to worry about these things at this point in your life.”