In the weeks leading up to Election Day, San Jose Inside has provided a look at four San Jose council races on the primary ballot: District 2, District 4, District 6, and District 8.

In this final installment, we focus on the remaining seat up for grabs on the 11-member City Council—District 10, where Bay Area Women’s March President Jenny Higgins Bradanini, ex-Brigade CEO Matt Mahan and businesswoman Helen Wang are fighting to succeed Councilman Johnny Khamis.

San Jose’s District 10 encompasses the southern stretches of the city, including Almaden Valley and Blossom Hill. The district is mainly made up primarily of single-family abodes and has a higher number of homeowners compared to other parts of the city.

In recent years, residents in the largely suburban district have grappled with concerns over public safety—traffic deaths, property crimes—and a spike in homelessness.

District 10 is the only San Jose City Council seat that doesn’t have an incumbent this election cycle. Johnny Khamis terms out this year and is making a bid for the California State Senate District 15 seat.

Helen Wang and her husband Dr. John Longwell are longtime D10 residents. Wang did not respond to SJI’s interview request, but according to her campaign bio, she managed one of the first urgent care medical clinics in San Jose for 30 years.

Outside of her work in the private sector, Wang has served on the Small Business Committee Transition Team for San Jose Mayor Chuck Reed, the Tenant Protection Task Force for the city of Milpitas and was the president and director of the Silicon Valley Chinese Technology and Business Association. 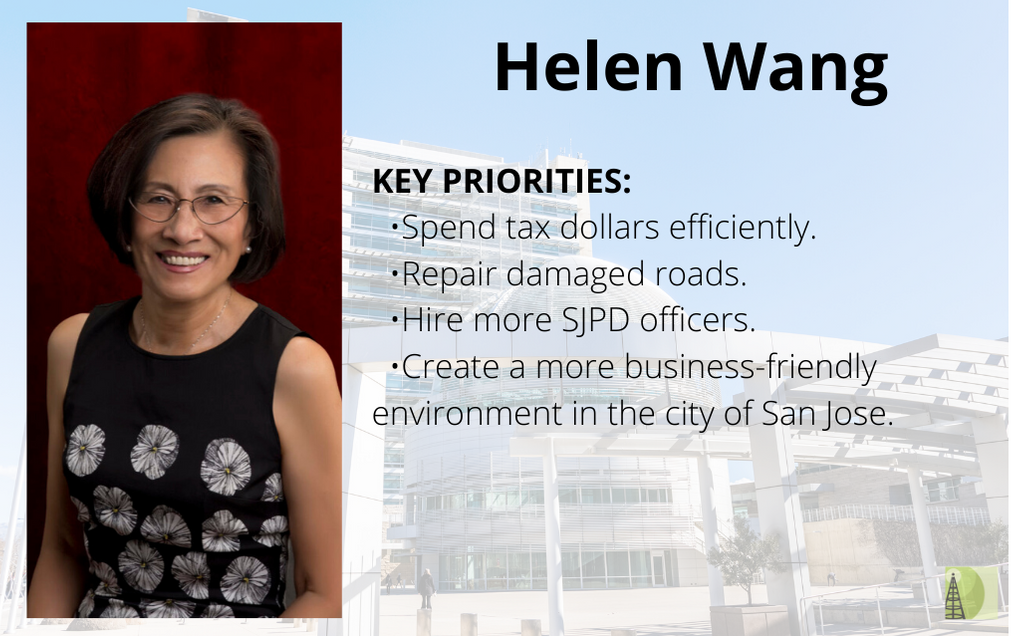 Wang has put fiscal responsibility at the forefront of her campaign, vowing to spend the city’s tax dollars wisely. She has publicly taken a stance against San Jose Measure E—a real property transfer tax that would be assessed on homes priced above $2 million. Money from the tax would go to the city’s general fund and would be earmarked for affordable housing and services for homeless individuals.

“We all are being taxed to death and now our leaders want to add another one,” Wang wrote in a Dec. 17, 2019, Facebook post on the subject. “While this tax effects homes sold over two million dollars this will have several side effects. But the main problem is the tax goes into the city’s general fund and can be spent on anything.”

Wang also wants to work to fix San Jose’s roads, improve the quality of life in the city and focus on community policing, according to the list of priorities on her website. 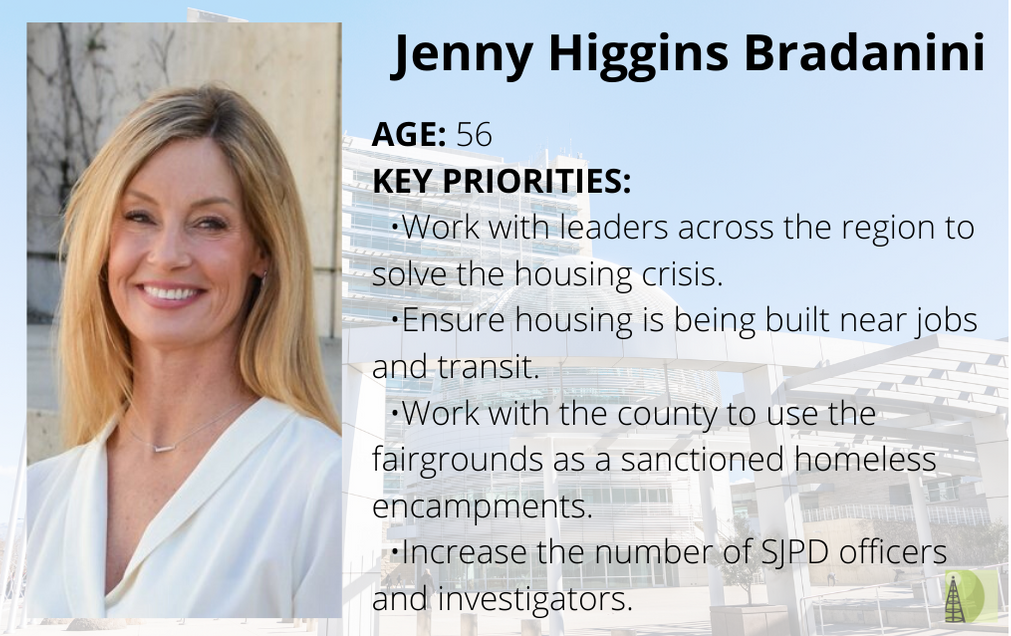 Jenny Higgins Bradanini, 56, has lived in District 10 for more than two decades, playing an active role in school and community groups. The mother-of-two grew up in San Carlos and attended Chico State. In the early 1990s, she returned to the Bay Area and settled in an unincorporated part of Los Gatos before eventually moving to San Jose.

Prior to taking on the role of president of Bay Area Women’s March, Higgins Bradanini spent time in the Silicon Valley business world. She says she was the first employee hired by a San Jose-based startup back in the early aughts and continues to serve as a consultant for the corporation to this day.

The D10 hopeful has also been involved in a number of community organizations including the Pioneer High School PTA, the Santa Clara County Women’s Equality Leadership Council and the Leukemia & Lymphoma Society. In 2018, she briefly worked as a policy aide for former D9 Councilman Don Rocha until his term expired.

If elected, Higgins Bradanini says she wants to focus on public safety and hiring more police officers and investigators. Last year, her car was stolen and allegedly used to commit a gang-related drive-by shooting. During the process, Higgins Bradanini says she witnessed the San Jose Police Department’s staffing shortage firsthand as investigators searched for the thief.

“Some of the situations that have happened to the residents in District 10, they feel like their tax dollars aren’t doing enough,” she says. “As we know, Chuck Reed, when he was mayor, kind of dismantled our police force so we are underrepresented for the amount of police officers that we need for our city.”

On a citywide level, Higgins Bradanini says she wants to ensure that developers build high-density housing. But D10, she says, isn’t necessarily the best place to do that given the area’s inaccessibility to mass transit. “We have to stop sprawling out into our open space and go in and do the infill where the jobs are and where the transit is,” she said.

She says she also wants to take a regional approach to the crippling housing crisis.

“We look at these other cities that are putting in all these jobs and not putting in the housing and expecting San Jose to house everyone,” she says. “They need to do their part as well, and I will be an advocate in making this a regional issue instead of just falling solely on San Jose.” 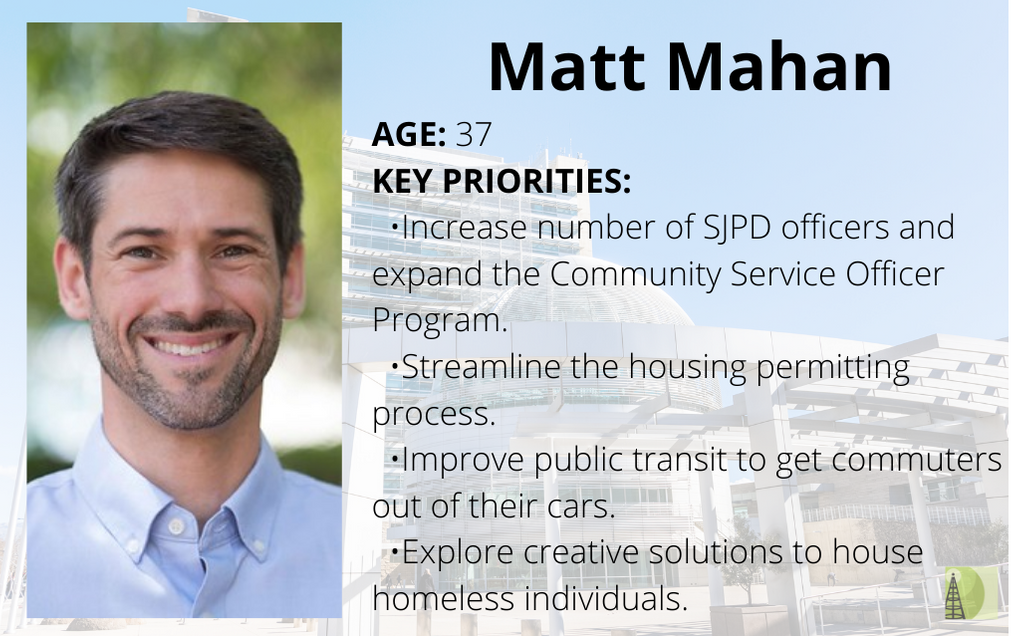 Growing up in Watsonville, Matt Mahan commuted almost daily to San Jose as a high school student at Bellarmine College Preparatory, where he grew to feel more at home in the Capital of Silicon Valley than his native farm town.

The 37-year-old’s interest in politics started at a young age as he gravitated toward reading about current events in the newspaper. After graduating from Harvard, Mahan spent a year in Bolivia building irrigation systems, according to his campaign bio. When he returned to the U.S., he entered the Teach for America program where he taught English and history at Alum Rock Middle School for two years.

In 2014, Mahan co-founded Brigade—a social networking site he billed as a space to promote civic engagement. The D10 candidate ran the company as CEO for five years before selling in May 2019. He and his wife Silvia have lived in the district for the last three years where they are raising two young children.

Like one of his competitors, Mahan says he wants to focus on incentivizing developers to build high-density housing near mass transit. However, he added, the city also needs to find a way to streamline the construction and permitting process.

“It should not take nine, 12, 18 months—in some cases I’ve heard over two years—to get entitled to do a project if it generally conforms to the kind of building that we want,” he says. “When someone’s trying to build an apartment building in our urban core, we got to make that incredibly easy to do.”

Another way to spur housing construction, he says, is by reducing fees. He’s previously stated his support for San Jose’s controversial downtown high-rise incentive that gives developers a tax break if they meet certain permitting deadlines.

Mahan also says the city should re-examine its park fees.

Though he considered himself a staunch environmentalist, Mahan says the taxes earmarked to improve public parks won’t do any good if the city can’t collect them because developers aren’t building in the first place.

“If our primary solutions to our housing supply problem are more taxes to subsidize new housing construction and more regulations, I’m worried we’re actually going to shoot ourselves in the foot,” he explains.

With a background in both data analysis and public policy, Mahan says he wants to make sure that the city is tracking its goals more rigorously—a tactic he believes could build trust and bolster accountability in local government. “When you go to the city’s website, it ought to be much easier to know what are our top goals, how are we tracking against those goals, what are our key performance indicators or metrics that help us understand how we’re doing and what are we currently trying to do better,” he says.

Christensen calls Higgins Bradanini “labor’s great hope,” but says the fatal crash in which she killed 66-year-old Timothy Starkey in December has “hurt her significantly.”