In the battle to stamp out extremism from the ranks of the police, lawmakers from California to Minnesota have proposed solutions they thought were straightforward.

Some laws would empower the police to do more robust background checks of recruits, letting them vet social media to make sure new officers were not members of hate groups. Other laws would make it easier for departments to fire officers with ties to extremists.

But legislators working to get these measures passed in recent months have found themselves confronting a thicket of obstacles and somewhat unexpected opposition, ranging from straight Republican vs. Democrat clashes to profound questions about protecting constitutional rights.

Last month, a police officer in Fresno, California, was fired after videos surfaced that showed him supporting the Proud Boys at a protest. “Such ideology, behavior and affiliations have no place in law enforcement and will not be tolerated within the ranks of the Fresno Police Department,” the police chief said.

Yet when lawmakers in the state recently proposed legislation to give police departments more power to weed out officers with extremist ties, they met resistance.

Brian Marvel, president of the Peace Officers Research Association of California, said in a statement that the organization supported the idea but not the legislation that was drafted. It would “infringe on a person’s individual rights,” he said, and possibly prevent someone from becoming an officer based on personal beliefs, religion or other interests.

Police officers, like everybody else, enjoy First Amendment rights to free speech and free assembly, so the challenge for lawmakers is figuring out how to preserve those rights while barring extremists from infiltrating the ranks.

California is one of four states, including Oregon, Minnesota and Tennessee, along with Washington, D.C., that have proposed new laws to give law enforcement agencies more power to exclude officers with ties to extremism. 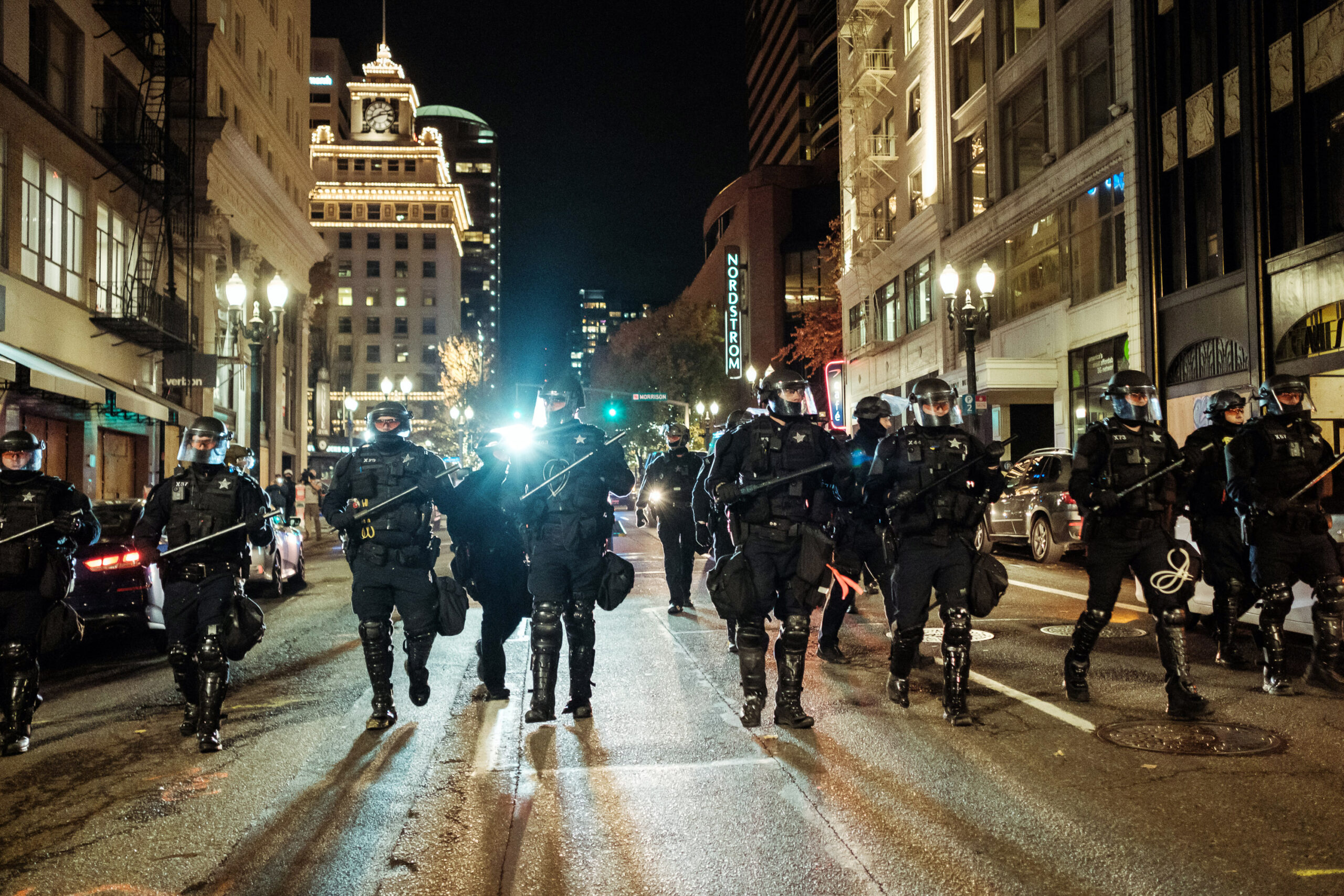 Police officers prepare to disperse protesters in Portland, Ore., on Nov. 4, 2020. The state is considering a bill that would allow potential officers to be screened more closely. (Mason Trinca/The New York Times)

Such efforts have been simmering around the country for years, spurred by FBI reports starting more than 15 years ago that document a concerted effort by white supremacist and other extremist organizations to infiltrate the police.

The events of Jan. 6 brought new momentum to those efforts, with more than 30 active or retired police officers coming under scrutiny for joining protests in Washington, and at least seven facing charges for storming the Capitol.

“When Jan. 6 happened, it gave an even more visceral sense as to why this kind of legislation was necessary,” said Ash Kalra, a Democratic member of the California Assembly. “This has been a long-term problem that really has not been directly addressed by law enforcement agencies.”

Racist gangs among Los Angeles County sheriff’s deputies have been a problem for decades. In Virginia, Texas, Florida, Michigan, Nebraska and Louisiana, law enforcement officers have been dismissed in recent years for ties to the Ku Klux Klan. And various agencies have been shaken by revelations of police officers exchanging derogatory remarks about minorities on social media, with the Philadelphia Police Department dismissing 13 of the 72 officers it put on leave in 2019 because of such Facebook posts.

There is little hard data on the number of American police officers with explicit ties to extremism, although senior officials have repeatedly characterized domestic extremism as an accelerating threat.

“We have a growing fear of domestic violent extremism and domestic terrorism,” Attorney General Merrick Garland said during a hearing on Capitol Hill last week.

Many legislators say that the spread in the country is mirrored in police departments.

Police officers themselves, at least those who acknowledge that there is an issue, tend to welcome the idea that added scrutiny will drive bad officers away. Major unions in California have supported the general idea of scrutinizing applicants more closely, but they opposed the first draft in February of a law that would reject all candidates who had been members of hate groups, participated in their activities or publicly expressed sympathy for them.

They feared that the legal basis for defining extremist groups was overly broad, and that members of organizations opposing abortion or same-sex marriage might be ensnared by the law.

Legislators in California negotiated compromise language for the bill with the main police unions in Los Angeles, San Jose and San Francisco, which then endorsed the change. The settled-upon language says, “No member of a hate group should be in law enforcement and if you are a member of one of these groups don’t apply, you have no place in our profession.” Still, some police officers and unions in California reject the modified legislation because of issues of civil rights and freedom of speech.

Some legal experts agree. The proposed measures are all bound to prompt challenges on constitutional grounds, said Philip M. Stinson, a former police officer who is now a professor of criminal justice at Bowling Green State University. It would be preferable to prohibit certain types of behavior rather than to focus on membership in an organization, he said.

“The idea that we can systematically reform policing through a bevy of legislative actions in short order, I don’t think that is possible,” he said.

Given Oregon’s history of opposition to changing laws governing the police, she and her allies consulted senior police officers throughout the state before writing the bill. They narrowly focused it on screening officers before they enter the force, allowing law enforcement agencies to review applicants’ social media posts. Although the legislation seeks to establish a uniform background check for Oregon police officers, it leaves it up to individual law enforcement agencies to set their own rules on issues like hate speech. The bill does state that “racism has no place in public safety.”

“We are trying to thread that needle to ensure those rights, but also not to tolerate any type of hate group,” said state Rep. Ronald H. Noble, a former small-town police chief who entered the Oregon House after 28 years with law enforcement. A Republican, he forged a rare bipartisan effort with Bynum, a Democrat, to craft the bill.

Daryl Turner, the head of the Portland Police Association, said he endorsed the heightened vetting because it left it up to individual departments how to deal with extremist candidates.

Officers must hold themselves to high standards, Turner said in a statement, and “the degree that this legislation accomplishes that is going to depend in large part on prudent and careful implementation at the agency level.”

In Washington, D.C., the new police chief, Robert Contee III, has expressed support for an independent screening mechanism for police officers that is expected to become law by the fall. The measure has faced little criticism there, which the city councilwoman who proposed it, Janeese Lewis George, attributed to a year of traumatic demonstrations over policing and social justice issues, as well as the storming of the Capitol.

Standards vary widely among police departments for how to confront extremists because many of the 18,000 law enforcement agencies across the United States set their own. They have their own contract language, as well, plus state labor laws differ.

In Minnesota, the death of George Floyd at the hands of a white police officer, Derek Chauvin, who was convicted of murder last month, brought new scrutiny to relations between the Minneapolis police and the city’s Black and Latino communities.

State Rep. Cedrick Frazier, a Democrat, thought the circumstances would make it easier to pass a new law barring any police affiliation with white supremacist organizations, even if Chauvin was not directly linked to any. He was wrong.

While Frazier’s Republican colleagues did not oppose the idea, they said they found it insufficient. State Rep. Eric Lucero sought to add other organizations to the ban, including al-Qaida, al-Shabab and Hezbollah, along with members of anarchist, environmental and animal rights groups.

The proposed bill moved out of the House criminal justice reform committee on a straight party-line vote. Among the amendments, Frazier sought to preserve one clause focused on white supremacy.

“This is about building trust within the Black community, and a large part of that is addressing the issue of white supremacy,” he said.

In Oregon, Bynum said the bill was prompted by both the intense protests over the past year and earlier conflicts.

One of them was a prolonged episode involving a Portland policeman, Mark Kruger, who was off duty when he hung plaques honoring five Nazi-era German soldiers in a city park around the year 2000. A decade later, when they were exposed, a review board found that Kruger had brought “discredit and disgrace” to the police.

When Kruger countered that he was merely a history buff exercising his First Amendment rights and threatened to sue, the city settled, withdrawing the criticism while erasing his suspension with 80 hours of vacation plus $5,000.

After 26 years on the force, he retired as a captain in 2020, not long before Bynum began formulating the new law.

For Bynum, getting a statement of principle against extremism set into law would be an important first step.

“Essentially, you have to move the ball,” she said.