“When I moved here, this was all dirt,” says the 34-year-old Hackler, brown curls tumbling out of a trucker hat on a sunny-day tour of what he calls his wild garden. “Junk-littered dirt.”

By landscaping with strictly indigenous plants, Hackler manages to keep water use to a minimum. What little he does tap comes from a 200-gallon rainwater tank that, by way of a spigot or an overflow pipe, tumbles into a dry creek and percolates into the soil. Even his chickens have a rain barrel.

Out back, he’s installed a system of subterranean pipes that pump dirty sink, shower and laundry water—commonly called graywater—to the roots of fig, apple, kiwi and lemon seedlings.

With California slogging through its fourth year of an apocalyptic dry spell—the worst in 106 years—Hackler’s knack for creating drought-tolerant landscapes is in high demand. Since founding Bay Maples Wild Gardens in 2007, the Silicon Valley native has transformed more than 200 properties to require little to no irrigation.

“People are realizing that it doesn’t make sense for our climate to keep watering these huge green lawns,” he says. “I think in the next couple of years, we’re going to see a shift in how our communities look. More native plants, less and less turf.”

As a conservation evangelist, Hackler often has to persuade clients to overcome an oddly nostalgic attachment to their grass lawns—heralded now as California’s great suburban water-suck. They’re convinced, he says, that their child’s happiness depends on green grass, that it’s somehow a requisite of a well kept home.

“People cherish their lawn,” agrees Santa Clara Valley Water District spokesman Marty Grimes. “They’ve had it forever. But we’re adjusting to a whole new reality where California doesn’t have enough water to sustain that anymore. That’s hard for some people to cope with.”

So it becomes part of Hackler’s job, and the water district’s, to convince people that California-appropriate landscapes can be more attractive than same-old turf—to change the collective preference.

“As much as we love a nice green lawn, it’s not natural for California,” Grimes says. “Just look around at the way the wild landscape changes season-to-season: green grass in the winter and brown dry brush in the summer.”

If not for aesthetic reasons, there’s plenty of financial incentive to make the switch. Since Gov. Jerry Brown ordered a 25 percent cut in statewide urban water use at the start of April, many of the state’s 400-plus local water districts have upped the budget for turf-removal rebates.

The Santa Clara Valley Water District has an especially strong impetus to change habits after missing its water reduction goals—public consumption fell by just 13 percent in 2014, while the goal was 20 percent. With South Bay reservoirs only half full and groundwater levels 40 feet below average, local jurisdictions have now gone beyond the governor’s mandate and called for a 30 percent cutback in water use.

The Santa Clara Valley Water District increased its lawn-replacement rebate fund more than nine-fold in the past few years, from $700,000 in 2011 to $6.5 million this fiscal year. That evens out to $2 per square foot, with a $50,000-per-site cap. In 2013, the district serving 1.8 million customers replaced 160,000 square feet of lawns with drought-abiding permaculture. It flipped 1.1 million square feet the following year. Through the end of April this year, the district already doled out rebates for 1.28 million square feet.

While some people opt to maintain the illusion of green lawns by spray-painting dead grass or installing artificial turf, Hackler says they’re missing the point. “People want grass and they don’t know why,” he says. “The fact is we’re going to have to permanently change our ideas about what our urban environment should look like.”

Farms drink up some 40 percent of California’s water, according to the California Department of Water Resources, and about half goes to lakes, rivers and natural waterways. Cities and towns take up just 10 of the state’s water supply. Still, water wonks say that easing up on irrigation is one of the most effective ways for individual consumers to contribute to the greater conservation effort.

“We have control over our immediate surroundings,” Hackler says. “That’s a start.”

Operating under the assumption that the drought signals a long-term shift because of climate change, not just a particularly punishing barren stretch, water officials are moving forward with plans to build permanent water-saving infrastructure. Just over a month ago, San Jose Mayor Sam Liccardo guzzled a beaker of treated sewage at staged event to drum up publicity for a planned $800 million expansion of local “toilet to tap” water recycling. Near San Diego, a $1 billion desalination plant is on track to deliver up to 50 million gallons of drinkable water a day by this fall.

But a study released last week underscored the importance of low-tech conservation in addition to high-tech infrastructure. Researchers from the University of California, Irvine, looked at how Melbourne survived a 13-year drought.

By the end of the drought in 2009, the Australian city of 4.3 million had cut its water consumption in half, largely through low-cost solutions like rainwater tanks, water-efficient toilets, showerheads and washing machines and capturing storm water runoff. Construction of a $6 billion desalination plant was completed three years after the drought’s end, though the facility has yet to wring out a single drop.

“One lesson for other cities is that major droughts, if serious enough and long-lasting enough, create opportunity for policymakers,” the study states, “as well as pose challenges.”

One such challenge is how to rein in the general public’s water use with a balance of rationing, fines and, eventually, reflecting its scarcity by upping the price point. 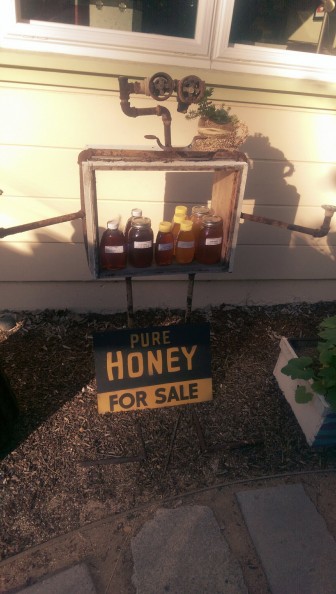 A honey stand fashioned from repurposed irrigation pipes and an old beehive.

“We watered it at first,” says Heikem, who moved with wife and kids into his Willow Glen home in 2007, four years ahead of the drought. “But we never felt good about it, so we just stopped. Let it turn brown.”

A few years ago while volunteering at his kids’ elementary school, he met Hackler planting an Ohlone garden of native plants and asked him to revamp his bone-dry yard. The resulting landscape has become a gathering space for the neighborhood. A path puzzle-pieced together with urbanite wends past rosemary and sage brush, a native grapevine and a couple artfully placed succulents.

By the front porch, a robot-looking gizmo made of old metal irrigation pipes and a beehive box holding jars of varicolored honey from Heikem’s backyard bees. Neighbors can take it as needed on the honor system, he says. Hackler has a talent for upcycling scraps into decks, trellises, sculptures or other accents. The rusted pipes forming the honey stand were dug up from Heikem’s dead lawn. Stumps bordering parts of the garden were salvaged from an arborist.

“The whole yard’s become a conversation piece,” says Heikem, who lists his address as part of a series of native garden tours. “When you have a lawn, it feels untouchable. People yell at you if your dog pees on it. … But with this, kids walking with their parents will take a detour to run through the path, jump off the rocks and hide in the bushes. It’s gotten me closer to my neighbors.”

Bay Maples will celebrate the grand opening of its new location at 1231 N. First St., in San Jose, from 6-10pm June 13. The event will feature workshops, local artists and live music.

Alan Hackler shows where the water from his graywater recycling system pipes into his backyard garden. (Photo by Greg Ramar)

Alan Hackler has responded to the drought by building a sustainable landscape at his downtown San Jose home. (Photo by Greg Ramar)