It takes more than a few minutes to transform into drag without a proper dressing room, which is why Talon Marks arrives a bit late to story time at Dr. Martin Luther King Jr. Library in downtown San Jose. By the time she emerges in the children’s wing, the roomful of kids are chanting her name in anticipation. In a red and black polka-dot dress, shiny black pumps and a wig teased into a three-inch pompadour that matches her beard, she towers over the tiniest tots in the front row.

As she warms up the crowd with a chant—“bread and butter, marmalade and jam, let’s say hello as loud as we can”—the kids analyze their guest speaker’s striking appearance.

“She sounds kind of like a boy,” a child who looks about 4 muses. “She is a boy,” another calls back from a few rows up.

More than 400 people turned out last Saturday morning for the city’s first-ever Drag Queen Story Time, according to the library’s count, bringing their sleeping 3-month-olds, chipper toddlers and reluctant 12-year-olds. I met a dad who wandered in with his baby unaware that story time was happening, but he was happy to have stumbled upon it.

The event, a collaboration with Silicon Valley Pride, was San Jose’s inaugural version of the internationally popular Drag Queen Story Hour (DQSH), which started three years ago in San Francisco and now runs events in major cities and towns as rural as Peoria, Illinois, and Winooski, Vermont. Though San Jose’s story-time series is unaffiliated with the DQSH organization, the vibe felt similar: songs, youngsters wiggling on parents’ laps and an elaborately done-up presenter reading children’s books about inclusivity and being true to oneself. 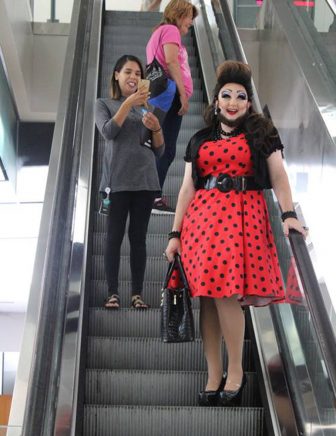 “We’ve seen other cities do it,” Silicon Valley Pride Chief Operations Officer Nicole Altamirano said. “We approached the library and they were totally on board with it, so we were super happy it turned out good.”

At craft tables set up in a corner away from the crowd, kids decorated cut-out paper crowns to wear on their heads as they listened. Rachel Warner took her 5-year-old daughter, who’s autistic, because she wanted her to see a unique person in a welcoming environment. “Inclusivity is really important to me,” Warner said. “There’s more than one type of person.”

San Jose Library Director Jill Bourne greeted families at the door, alongside a police officer in a suit jacket. “We try to treat this like it’s every other program, but it’s really special,” Bourne told the crowd before the queen of the hour commenced story time.

Despite the strong show of support, however, the event was not without controversy. Once word spread about the event, the announcements on the library’s website lit up with comments calling drag “abnormal behavior” and “a mental illness,” comparing drag queens to rapists and accusing the library of promoting child abuse. Several people threatened a protest.

Vice Mayor Magdalena Carrasco and City Council members Raul Peralez and Don Rocha posted supportive statements about the event on Facebook. Peralez shared a video of a similar event in the Bronx, prompting an onslaught of both angry and delighted responses—hundreds of them by press time.

In a rare step, Peralez jumped into the fray in defense of the glamorous spin on traditional story time, saying, “If my son wants to become a Drag Queen one day it won’t be because I took him to hear an inclusive story at the library. But hearing that story may end up helping him to stand up to bullies one day, bullies who can’t get over their own stigmas and learn to accept others.”

In contrast, when former city employee and stay-at-home mom Zeba Ebrahimi tagged Mayor Sam Liccardo in a tweet calling the event “a nightmare,” the mayor thanked her and tweeted, “I’m looking into it now to understand more of what this is about.” Liccardo did not respond to repeated requests for comment.

The initial backlash did not translate into a physical strike, to Bourne’s relief, and parents who attended the story hour dismissed the detractors as reactionary.

“You know what? We’re in 2018,” said Martina Martinez, a straight mom who brought her 6-year-old daughter, 9-year-old son and 8-year-old nephew to hear Marks tell her tales. “I want that for my kids, to live their lives and respect other people’s.”

Raymond Mueller—a candidate for the Alum Rock Union Elementary School District board of trustees and a gay parent of a 13-year-old boy—said he encourages critical parents to open their minds.

“People fear those things they don’t understand like a child fears the dark,” he said. “I would hope they would brighten their worlds with some education.”

For queer parents like Mueller, the event fostered a sense of community. Recent New Hampshire transplants Sarah and Gabrielle Leone brought their 2-year-old son Mateo, who—sharply dressed in a newsboy cap—toddled toward Marks to get a closer look as she read Worm Loves Worm, a book by J.J. Austrian about two smitten wrigglers who tie the knot. Back east, Gabrielle said, they had “buddies for him that had two moms,” and they hoped Drag Queen Story Time would offer a chance to find more friends in Silicon Valley.

“We know, based on the child development studies, that gender begins to be constructed early in childhood, around age 3-6,” explained Maribel Martinez, director of the Santa Clara County Office of LGBT Affairs. “For a young person who is exploring gender or acknowledging their gender, having positive role models in places where they feel safe to be their full self is really important to their development.”

After another book, You’re Wearing That to School? by Lynn Plourde, about a hippo who wears a sparkly outfit despite peer pressure, Marks accepts a bouquet of flowers, beauty queen style. Though babies start to get fussy, the mood in the room feels jubilant.

“You can see there’s a big turnout here, lots of people,” said Jeremy Corrales, who arrived with his partner, Justin, and year-old niece. Corrales was scheduled to perform at the next morning’s Drag Brunch Sunday at SoFA Market.

“Everyone’s smiling, and there’s so many kids.”

It was enough to bring Mueller to tears.

“Every freedom march, every pride, every protest, all these years has led to this day,” he said. “This is beautiful. This is what we’ve been fighting for all of my adult life.”

In honor of Silicon Valley Pride month, the library will host two more drag story times, one at 11am on Aug. 18 and another at the same time on Sept. 15.