Parents, employees and hundreds of students frustrated by the Alum Rock Union Elementary School District’s dysfunctional leadership are planning a walkout later this week to protest alleged abuses of power by the elected board. The district-wide demonstration, which will start Thursday afternoon and run until a regularly scheduled board meeting at 5:30pm the same day, comes amid a growing call for trustees Esau Herrera, Dolores Marquez and Khanh Tran to resign.

The board majority’s apparent intention to oust ARUSD Superintendent Hilaria Bauer prompted parents to act, said Zelica Rodriguez-Deams of Somos Mayfair, a nonprofit that works closely with families in the school district. Trustees delivered their evaluation of the superintendent’s performance in closed session last week, despite Bauer’s efforts to have it take place in public view.

“That was the straw that broke the camel’s back this last time,” Rodriguez-Deams said on Monday as parents held a planning session for the protest. “We understand that this evaluation is part of the termination process. … And there’s really no basis for why they’d be taking this action against the wishes of the community and the students.”

Problems at ARUSD have been mounting in the past year since a review by the state’s Fiscal Crisis and Management Assistance Team spelled out a long list of concerns at the 10,000-student district, including poor governance and micromanagement by the board. The audit directed trustees to end or renegotiate contracts with Del Terra Real Estate, a company that’s come under fire scrutiny in the South Bay and in Southern California, and to repay a $25 million loan that threatens the district’s financial stability.

But the majority bloc on the five-member board has yet to comply with those directives, with Tran pointing the finger at Bauer and district staff, and accusing the superintendent of insurance and securities fraud. Meanwhile, the board has reportedly manipulated the scores of her personnel review to result in a less favorable evaluation.

In February, the board also pulled off its third coup in the past six months, re-appointing Herrera as president. Leading up to the latest changing of the guard, trustees ignored warnings from a bond adviser about the district’s downgraded credit rating by selling $35 million in voter-approved bonds, fired the district’s labor attorney and hired a new one suspected of having close ties to Del Terra.

Rodriguez-Deams said the mismanagement and resulting investigation by the Santa Clara County District Attorney’s Office have been a huge distraction for the district, which is trying to focus on pressing matters such as student safety and academic achievement in one of San Jose’s poorest neighborhoods. In a call to action emailed to local families, Somos Mayfair Director Camille Llanes-Fontanilla called the ARUSD board’s dysfunction a form of “institutionalized violence.”

“Violence against our communities takes many forms,” she wrote. “From ICE terrorizing our immigrant communities, to the rampant abuse of women and girls across the globe, to gun violence in our schools, to the abuse of power by elected officials—our communities are under attack. But instead of succumbing to fear, we choose to stand against all forms of violence. We are calling for a district-wide walkout to shed light on the abuses of power exhibited by the Alum Rock school board majority over the last year, and, quite frankly, over the last several decades.”

Tran characteristically dismissed the protest as misguided and futile. The trustee—whose outbursts have drawn comparisons to those of President Donald Trump—said people who join the walkout “are making a big mistake” and  “don’t know the full story.”

“They don’t know the facts and they’re being emotional,” he said in a phone call Monday evening. “Whatever the parents are saying, they’re saying it because they’re manipulated by people who are up to mischief.”

Trustee Andres Quintero, however—who’s part of the board minority that supports Bauer and the state audit’s findings—said he understands the community’s frustration.

“As a board member, I do not condone children not being in the classroom,” he told San Jose Inside, noting that he just found out about his own kids planning to protest. “But I do understand why they’re staging this huge rally. … It’s gotten to the point where you feel like there’s no other recourse.”

In a letter to families, Bauer acknowledged that the district is undergoing a difficult time an urged parents to think of the safety of the students.

“Recent tragic events have challenged our school community,” she wrote. “Precisely because of these recent tragic events, it is critical that we ensure the safety of our students, district staff and entire school community. It has come to the district’s attention, that a local community organization is encouraging district students and staff to walkout on Thursday, March 8. While students have the right to participate in peaceful dialogue during non-instructional time, we encourage parents to talk to their children about the importance of a safe learning environment free from disruption.”

Raymond Mueller, who helms the district’s bond oversight committee and is campaigning for a seat on the board, said the protest underscores the importance of electing new leadership as Tran, Quintero and Herrera come up for re-election this year.

“Without trying to be funny here, there is a great disturbance in the force,” said Mueller, who’s raised more than $4,000 to support his bid for office. “People are worried about Dr. Bauer again, and after the meeting last week, they decided that it’s time to act.” 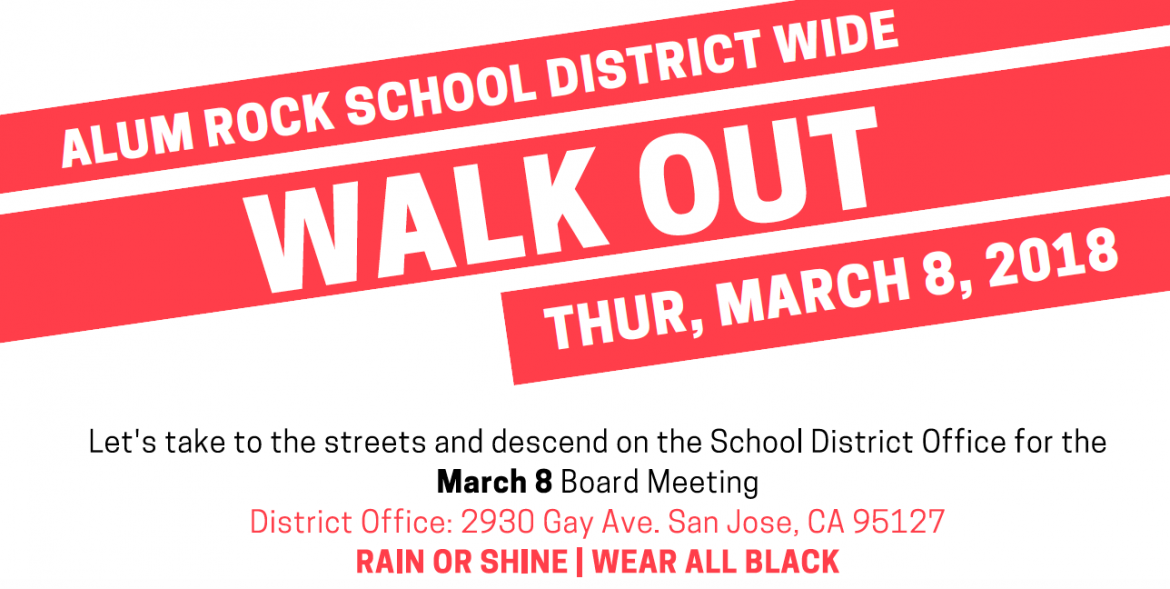 This article was updated on March 7 to add a statement from Superintendent Hilaria Bauer. Below is a copy of the announcement Somos Mayfair sent about the walkout.

DISTRICT-WIDE WALK OUT to restore safety, healing and peace in our schools and to denounce all forms of violence by the ARUSD School Board.

WHAT: 400 students walk out from ARUSD schools on International Women’s Day, to shine light on the consistent and unscrupulous abuses the ARUSD board has unleashed generation after generation. Last week, for the seventh time, the board called a special session where community witnessed the fundamental breakdown of democracy and were assaulted by the complete incompetence of the board. After the superintendent requested an open and public performance evaluation, the board launched into finger pointing, hostility and unrelenting bashing of each other. This is the representation and leadership the board models week after week but TIME IS UP! STEP UP OR STEP OUT!

WHY: We continue to expose a board whose legacy will be standing on the backs of our students for political and financial gain. We will not support a board that is aligned with corrupt corporate interests instead of serving ARUSD families and children.

Recent actions show that the board majority refuses to be held accountable by the community they were elected to serve. We stand together to demand accountability from the full school board so the focus returns to ensuring student success in school and in life.

ARUSD Board is gearing up to terminate yet another superintendent, making it their 13th change in recent history which has meant settlements, legal fees and pay out of a roughly $2.6 million overtime that would have otherwise been invested in supporting our most vulnerable students. The board has been indebted and held hostage by firms that provide campaign contributions to maintain a mutually beneficially relationship. Lastly the board has governed with an iron fist and imposed changes and decisions without consideration to community voice or consequence. The community is tired of asking, or waiting for change to happen and are coming together to DEMAND the board step up or brace themselves for change. The status quo stops NOW!

We have the following demands: (1.) Santa Clara Department of Education exert maximum enforcement of their fiscal oversight role by STOPPING any and all ARUSD board direct or indirect fiscal decisions, (2) Shift focus back to the students we all serve by having open and transparent decision making practices that are moral and just, AND (3.) the board take direct action to support the mentioned demands or STEP ASIDE!