When the Santa Clara Valley Transportation Authority (VTA) opened a call for proposals to build a mixed-use development near the Tamien light rail station in 2016, the agency required bidders to include a multilevel parking garage. Now, the terms under which CORE Development and and Republic Urban won the competition may be relaxed—without putting the project back out to bid.

The recent reversal on the garage raises questions about whether the requirement was a way to reward a preferred or politically connected team of contractors. Close ties between developers and some members of the VTA Board of Directors suggest that political favors tainted the bidding process.

Six companies applied when the agency solicited bids, prompting VTA board member and Santa Clara County Supervisor Cindy Chavez to lament how so few submitted a proposal for the 7-acre site between Willow Street and West Alma Avenue in San Jose’s Willow Glen neighborhood. The reason VTA wound up with such slim pickings? Because the garage on the west side of Highway 87—a key feature that VTA mandated while courting proposals—posed a major financial hurdle to prospective bidders.

By requiring the structure to replace an existing 275 parking spaces on the site, the VTA board eschewed a competitive offer from ROEM Development that would have delivered 50 more affordable housing units in an area that desperately needs it.

Instead, the transit board awarded the deal to CORE and Republic, which teamed up as UrbanCo-Tamien with a pitch to build 440 housing units—only 88 of them reserved for people earning no more than 60 percent of the area’s median income—with 3,000 square feet of ground-level retail and, possibly, a child care center. The winning bid, which was endorsed by the San Benito and Santa Clara County Building and Construction Trades Council, also included a $23 million concrete parking garage big enough for 900 cars.

Records show that another competitive offer may have been passed over in favor of developers with a long history of donating generously to certain VTA officials’ political campaigns. A long trail of campaign contributions leading from UrbanCo-Tamien to Chavez and her political allies, county Supervisor Dave Cortese and San Jose Councilman Raul Peralez, may offer clues about why ROEM’s bid ultimately lost.

CORE was a major contributor to campaigns for Peralez, Chavez and Cortese over the years, with much of the nearly $100,000 that Republic gave over the past decade to various candidates weighted toward the latter two. In total, records show 38 contributions totaling $23,650 to Chavez, Cortese and San Jose Councilman Don Rocha from people at both companies.

During her 2006 run for San Jose mayor, Chavez received $5,500 from several people at Republic, including a secretary and a driver, while the company separately chipped in $50,000 to the Santa Clara County Democratic Party. This was all after Republic, along with Barry Swenson’s Green Valley Corp., was selected by the Chavez-chaired VTA board to develop a parcel on San Carlos Street into high-density housing.

Chavez recused herself from voting on the Tamien contract last year because of political contributions in past races from developers competing in the bid. But her protege, Peralez, who’s running for re-election in San Jose’s District 3 where the project is located, voted yes on the CORE-Republic proposal. Months later, CORE President David Neale and his son, Executive Vice President Chris Neale, each gave $600 to Peralez’s campaign and endorsed him for re-election.

VTA staff, however, says UrbanCo-Tamien won the deal for reasons that were practical, not political. Ron Golem, the agency’s deputy director for real estate and joint development, says the board picked the CORE-Republic team because it “did not have the same sharing of risk” when it came to building a pricey parking garage.

ROEM’s parking structure was $10 million less than UrbanCo-Tamien’s estimate. But VTA Chief Financial Officer Raj Srinath wrote in a March 2017 memo that “the low cost and lack of ROEM’s commitment to build the structure irrespective of actual cost results in a substantial risk to VTA.” By demanding that developers finance and build the parking garage before housing without tapping into VTA money, the agency may have have scared off other suitable contenders.

“Many of these developers indicated that they could not submit a proposal for the Tamien site because of the challenge to formulate a feasible development project … with no VTA funds available for the replacement parking structure,” Srinath wrote in the same planning document from last year.

VTA’s concerns about parking and financial risk are now apparently a moot point, however, because the board summarily removed the garage requirement from the project. Republic CEO Michael Van Every says the parking structure was eliminated because it would worsen traffic in surrounding neighborhoods and because the company plans to work with the park-and-ride surface lot that’s already there. CORE Executive Vice President Neale echoes his counterpart at Republic.

“We just thought for housing, it was way over-parked,” he says.

Plenty of neighbors would disagree. Many of them have been pleading with VTA to build more parking before adding any high-density housing in the area.

Not everyone sees the elimination of a parking garage as a drastic revision in the scope of the development. Golem says it’s unlikely that the VTA will reopen bidding because “the project has not fundamentally changed.”

But some elected officials and ROEM Executive Vice President Alex Sanchez say that eliminating the garage mandate alters the project’s economics enough to warrant a new call for proposals.

“Many experienced and financially capable private developers were eliminated by unreasonable financial requirements which are now being changed,” Sanchez says. “The VTA and the public are being denied the benefits of a truly competitive process that seeks to obtain the services of a large group of qualified developers that can produce projects that are models for the Tamien site and future VTA joint development efforts.”

Brett Bymaster, an activist who’s been trying to get VTA to re-bid the project to bump up its affordable housing units from 88 to 150, says he’s hopeful that will happen.

“The VTA staff, from the beginning, told the developers that they wanted to enter into an exclusive negotiating agreement and make changes to the original [request for proposals],” he says. “And that’s exactly what they’ve done, much to the benefit our low income community which is starving ... for low income housing.”

According to an analysis by Bymaster and other community organizers, there are more than 100 affordable housing units in the project’s zip code for people who make six-figure incomes—and zero for those who make $30,000 a year.

Former San Jose City Councilman Pierluigi Oliverio, who recently received a $1,000 donation from David Neale for his Santa Clara County supervisor campaign, also thinks reopening the project to bid is the fairest way to ensure that taxpayers “get the best deal.”

“If it’s a substantial change, it might behoove a government organization to rebid a project and see what else is out there,” Oliverio says. “Since this is public land, I could only assume they’d want to get the best deal.”

VTA board member and San Jose Councilman Johnny Khamis—who recused himself from voting on the Tamien project because of past campaign contributions from the companies vying for the deal—says he supports a renewed call for proposals.

“Because,” he says, “every bidder should be playing on the same playing field.”

Fellow board member and San Jose Mayor Sam Liccardo, who recused himself from the Tamien vote for the same reasons, says he believes the project should include a garage.

“I think the community expects that,” he says, “and it’s been in the plans for many years.” 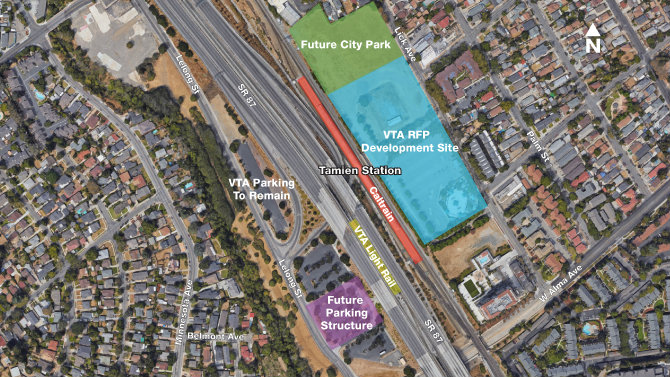