San Jose State President Mary Papazian has made repeated pledges to “house every Spartan” and ensure that no homeless student is turned away if requesting temporary housing. But a recent interaction between a homeless student and the university’s housing office tells a different story.

“I was informed that I could rent a vacant dorm room,” the student, who asked to remain anonymous for this story, wrote in an email to SJSU’s Housing Services on Sept. 3.“They gave me this email to contact and get information. [Is] it possible to rent it so I can at least have stable housing instead of sleeping outside or [in] the library?”

The student inquired further about emergency accommodations. She was told that there was nothing available and that the waitlist for any room was already eight names long. To apply for a spot would cost her a $50 application fee and a $600 initial payment. The residence halls were also full, she was told.

The college sophomore said she had no place to go. 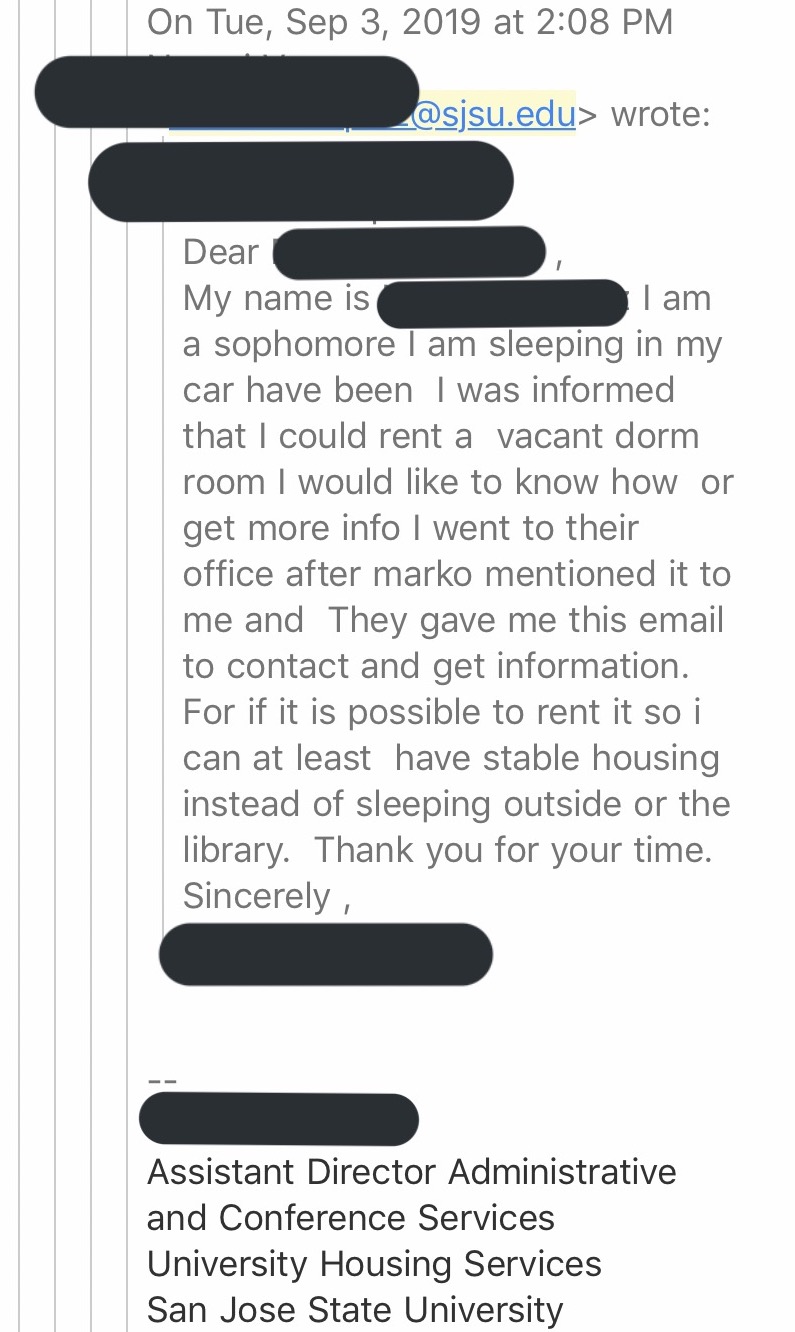 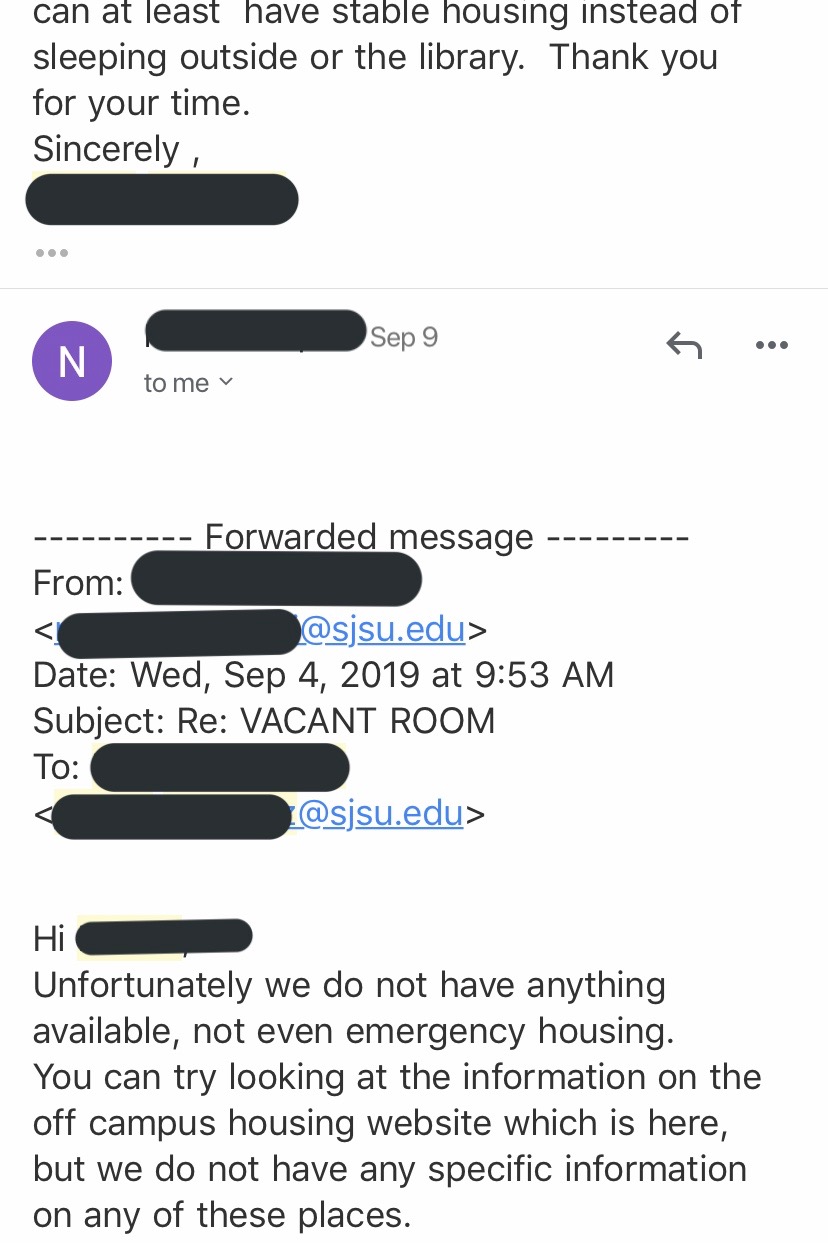 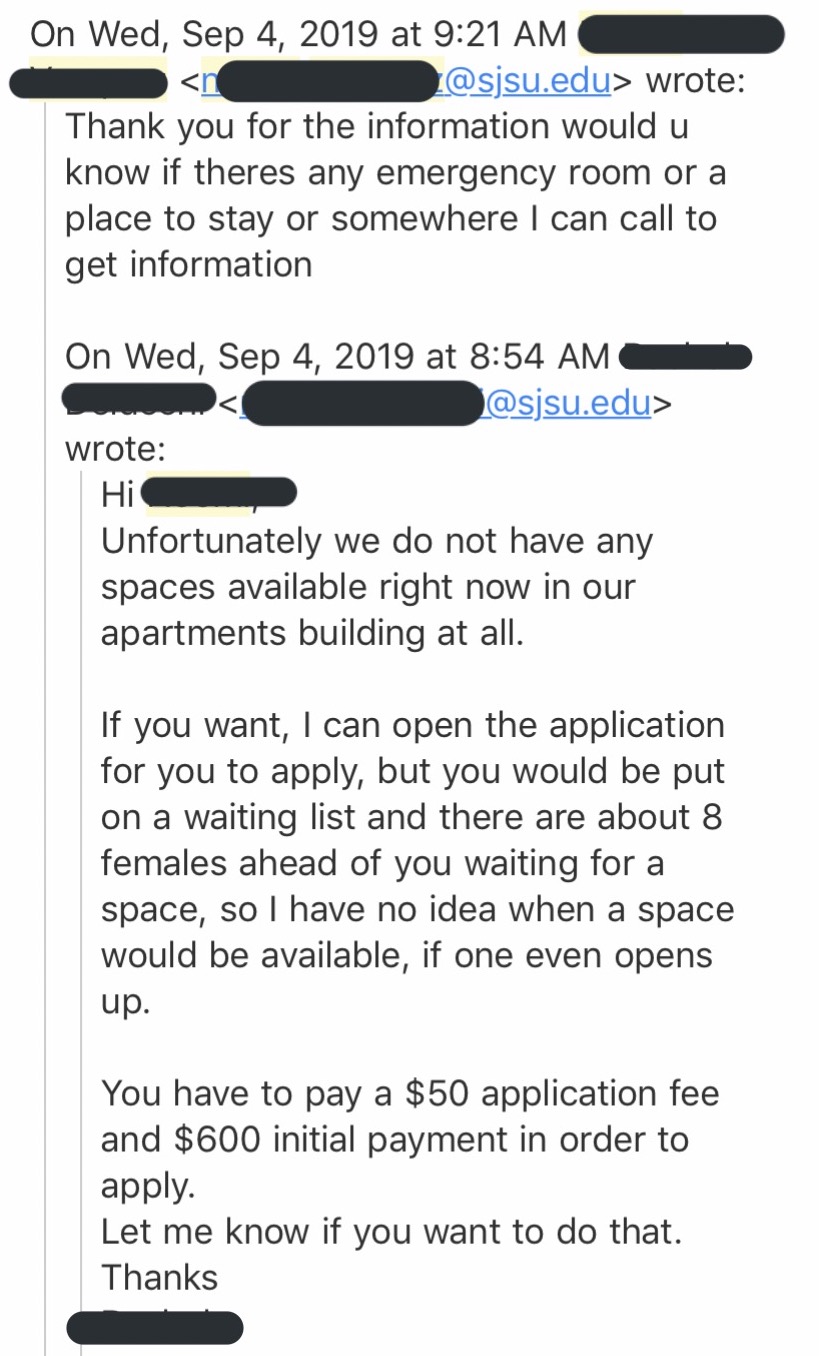 “It’s infuriating, especially after the [administration] says they’re not going to turn any student away,” Student Homeless Alliance (SHA) organizer Alejandro Mayorga said. “This is a student’s safety, this is a student’s health. We’re here to get an education.”

Mayorga said the unnamed student, who had been in communication with the group of student-activists that comprise SHA, already reached out to the school’s resource center, known as SJSU Cares. She wasn’t given an emergency bed, nor was she even offered a connection with Grace Baptist Church or the Bill Wilson Center, Mayorga said. SJSU Cares had reportedly been sending students to the two organizations earlier this year.

“I’m frustrated that they’re sticking with the narrative,” Mayorga remarked about Papazian’s house-every-Spartan claim. San Jose State administrators did not immediately respond to a request for comment. 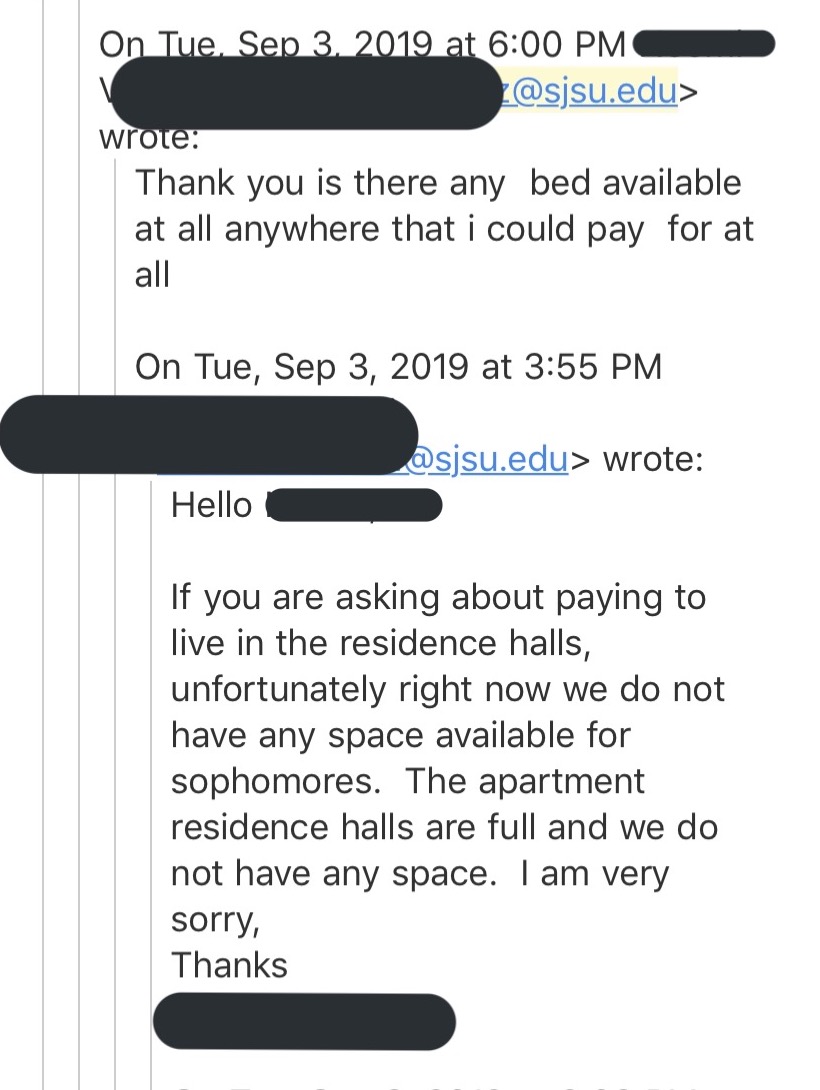 A recent California State University report found that 13.2 percent of SJSU students (more than 4,000) were homeless during the 2016-17 school year—more than two percentage points higher than the statewide CSU average of 10.9 percent.

But, as portrayed in that revealing email, the response from administration has fallen short of its promises—such as providing safe parking in one of the nearby garages. Armed with the statistic that only 189 homeless students contacted SJSU Cares for services during the 2018-19 school year, the Student Homeless Alliance on Wednesday announced five new demands. They are:

“Every student’s basic needs truly do matter to us,” Christine Hutchins, the university’s senior associate vice president for strategic communications said in response to SHA’s demands. “One student who’s homeless is one too many and we are very committed to being able to look at what those long term viable solutions are with our student body, with our city officials and with our community agencies.”

According to the school, of the 189 students who contacted SJSU Cares:

Twenty-seven-year-old Maggie Young was one of the many students who contacted the university over the last year in search of housing help. But the transfer student and single mother of two said administrators “chuckled” at her and told her she wasn’t a “model student” and wouldn’t want to raise her children on campus.

“Hearing this not only insulted my parenting, but it had undermined all the hard work that I had put in these past two years,” Young told San Jose Inside. “I was crushed that I might actually have to step away from my academics and my passion for helping people to accept a minimum wage low paying job just to find housing.”

After weaving through multiple channels—including an unsuccessful attempt to find housing via San Jose State’s partnership with the homeless services nonprofit PATH—Young found a backyard cottage to rent about 10 miles away. It now takes her 45 minutes to get to campus, but her only other alternatives were a cramped shared apartment and the RV she bought after moving to the South Bay from Monterey County.

“I cannot wait around until I hit rock bottom, where it comes to sleeping in a car with my children,” Young quipped.“SJSU holds a position of reactiveness with student homelessness rather than proactiveness. Student homelessness is an issue that requires a resolution of longevity not [one] that quiets the crowd in the meantime.”

Grace Hase is a staff writer for San Jose Inside and Metro Silicon Valley. Email tips to [email protected]news.com. Follow her on Twitter at @grace_hase. Or, click here to sign up for text updates about what she’s working on.