Seven people stormed the U.S. Attorney’s Office in San Jose and occupied the building for an hour last week to protest President Donald Trump’s draconian immigration policies. Activists upped the ante as the protest went on. First, they staged a die-in, then they blocked the doors from the inside and finally from the outside.

San Jose police showed up in six squad cars in response to the demonstration of civil disobedience, but no one was arrested or cited. 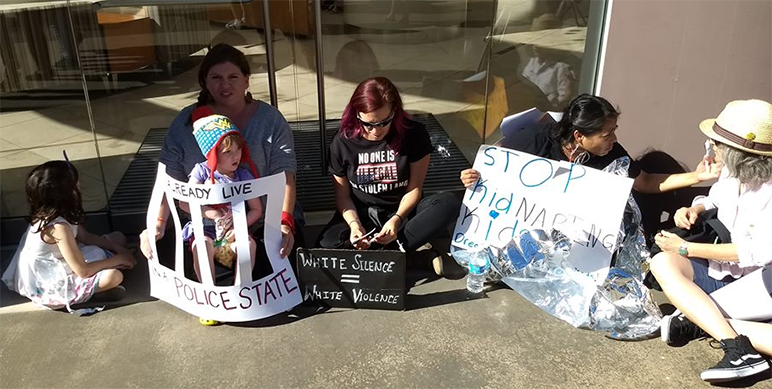 Protesters outside the U.S. Attorney’s Office in San Jose were prepared to get arrested during last week’s protest.

Chants of “up, up with liberation, down, down with deportation” filled the streets of downtown for the Thursday afternoon protest as people gathered in front of the Robert F. Peckham Federal Building to denounce the separation of families at the border. 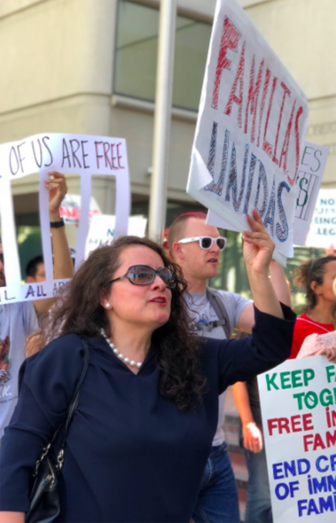 San Jose resident Rosie Zepeda marches along with other protestors at the downtown rally. (Photo by Dominoe Ibarra)

Upward of 2,000 immigrant children have been stripped away from their parents during their attempts to cross the border in hopes to seek asylum in the past month or so. Though Trump signed an executive order to end his harsh family separation policy, it was no help for the parents already taken from their kids.

The event last week—a warm-up for the Families Belong Together demonstrations that unfolded this past weekend—was organized by local community groups, including MAIZ San Jose, Serve the People San Jose, the Santa Clara County Wage Theft Coalition and the Justice for Josiah coalition.

But marchers stressed that the protest was led by women of color in solidarity for the families divided by U.S. immigration policies.

“Women are the glue to all families and what we want are for all families to be together,” Angelica Esquivel explained.

Many people marching in protest were either immigrants themselves, friends or families of immigrants or women who felt the connection of being separated from their families. 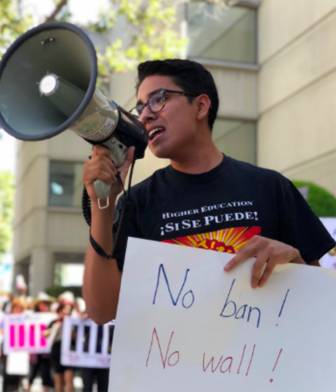 “I immigrated to this country when I was 6 years old and I was reunited with my parents who were already here looking for a better life,” Esquivel said. “Luckily, I was able to be reunited with them. But I think about, ‘What if I wasn’t?’ So I think this is deeply part of my history as well as part of my responsibility.”

The march began at the federal building, stopped at the Plaza de Cesar Chavez and ended at the U.S. Attorney’s Office on South Almaden Boulevard, where the civil disobedience prompted a response from local authorities.

Cars honked in solidarity with marchers, with some giving a thumbs up out their windows.  Bystanders cheered along with the protesters, who amplified their voices through bullhorns and a chorus of chants.

At Plaza de Cesar Chavez, protestors stood out on platforms and spoke about what brought them to the demonstration that day. One protestor, San Jose resident Joel Rodriguez, wrote his thoughts in a spoken-word piece. 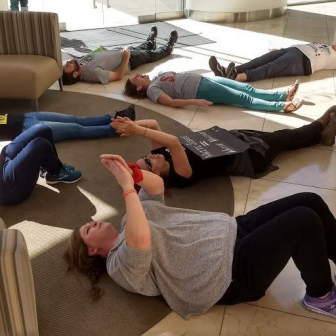 Protesters staging a die-in at the federal building.

“You dehumanize my people, putting us in cages, keep treating my like a monster and now I am feeling dangerous,” Rodriguez shouted. “I want to stand up and say I’m going to make a change but how can I do that when I, myself, am locked in chains?”

The protest ended with attendees committing to continue speaking out against the national government for separating families trying to find a better life.

“I hope that this event shows the people of San Jose and the people of this country there are people who are not OK with what is happening at the border,” Rev. Sophie Callahan said. “There are many of us that can’t go down to the border ourselves but we want to stand up in our own communities and say that we disagree with the policies of our current administration and we want to stand for something better.” 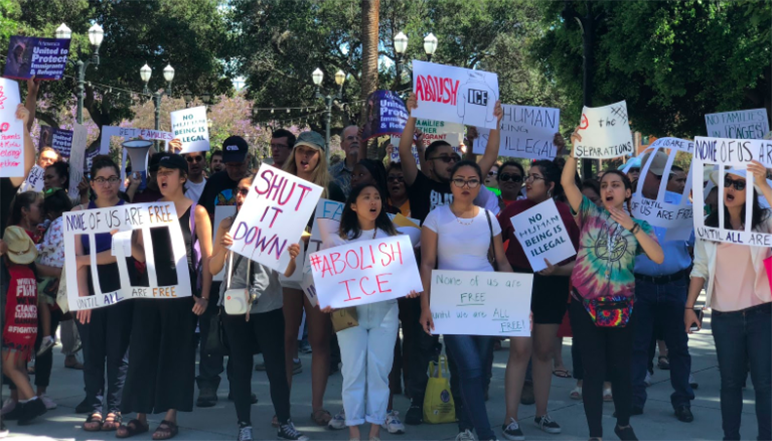 Protesters marched through downtown in one of several marches held throughout the Bay Area this past week to protest President Trump’s immigration policies. (Photo by Dominoe Ibarra)