San Jose Councilman Pierluigi Oliverio says he and colleagues have not been given a full update on what police have done in the wake of violent protests following Donald Trump’s rally last week at the Convention Center.

In a memo penned for Tuesday’s City Council meeting, Oliverio said Police Chief Eddie Garcia and City Manager Norberto Dueñas have still not provided “any written update” on what occurred four days after media outlets and attendees with smart phones captured people shouting racist epithets and brawling in the streets.

“It has been four days since violence related to a political rally took place on our downtown,” Oliverio wrote. “The city council has not been provided any written update from the city manager or police chief. Presently none of us have all the information required to completely assess exactly what transpired, what else may or may not have been done, or what should be done in the future should similar circumstances arise.”

Oliverio suggested that there is an urgency for more information considering the city’s lone major sports franchise, the San Jose Sharks, are currently playing in the Stanley Cup Finals against the Pittsburgh Penguins.

“I feel this issue needs to be discussed and reviewed in short order, especially (fingers crossed) since the Sharks could win the Stanley Cup, and the city needs to ensure that it can prevent innocent people from wanton violence,” Oliverio wrote. 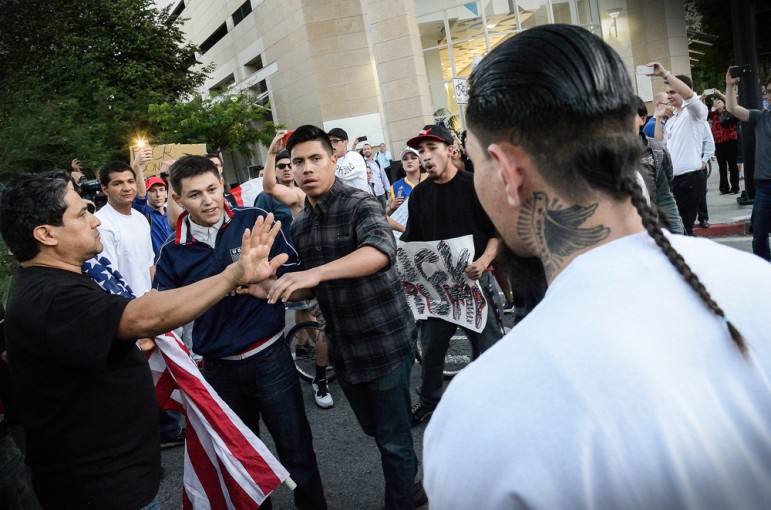 Both Mayor Sam Liccardo and Chief Garcia have come under scrutiny for how the city handled the protest, as well as comments the two made the next day. Liccardo blamed Trump’s racist and antagonistic rhetoric over the last year for stoking racial tensions that have led to violent clashes between supporters and opponents across the country, and Garcia admitted that officers witnessed crimes being committed Thursday but chose to hold the line rather than single out perpetrators and risk creating a more chaotic scene.

“Police investigators have made significant progress and additional arrests are imminent,” Morales wrote. “We have identified some of the suspects involved in the violence associated with the Trump rally. However, we still need the public’s assistance, and we are urging those individuals who were assaulted or injured during the rally to contact San Jose PD investigators immediately. We need any person who was a victim of a crime, or can provide valuable witness information, to come forward so we can complete our investigations and bring charges as appropriate.”

Anyone with information is urged to contact the San Jose Police Department at 408.277.4161 or 311. Anonymous callers should reach out to the Crime Stoppers Tip Line, 408.947.7867 or this website. Cash rewards might be available. In addition, online crime reports can be filed here.