Taking the lead from nearby Bay Area cities, San Jose is poised to enact a developer fee to help pay for affordable housing.

The proposal up for consideration at Tuesday’s City Council meeting calls for a housing impact fee of $17 for every square foot of new market-rate housing, with a 2.4 percent annual increase to keep up with inflation.

Average rents in San Jose have jumped 49 percent since 2010, according to RealFacts. They’ve increase nearly 11 percent in the past year alone to an average of $2,230 a month. City officials estimate the actual deficit is 16,315 affordable units.

San Jose imposed a similar fee years ago, called the inclusionary housing fee, but that was challenged in court by developer groups.

Before proposing a new fee, the city had to come up with a “nexus study,” to verify the link between new market-rate construction and the dearth of affordable housing. The study supported fees at high as $28 a square foot. 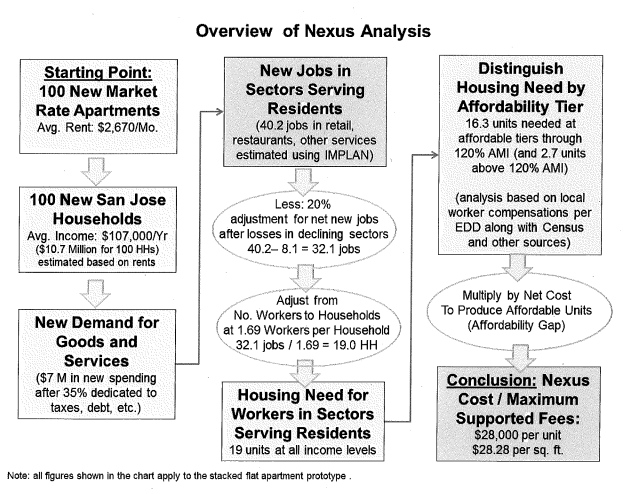 San Jose came up with a similar fee years ago—which required developers to include affordable housing units or pay an in-lieu $17-a-square-foot fee—but that was challenged in court by the Building Industry Association.

Councilman Don Rocha says the city should also look at extending a fee to non-residential development—to lower the rate and broaden the base.

“[I]t seems out of sorts for us to place a fee on housing after constraining its development,” he writes in a memo. “It seems that it would be much more logical and fair to place a significantly lower fee on both commercial and residential development.”

Another possibility, he adds: look at building micro-apartments to offer even more affordable options for low-income workers.

Council members Sam Liccardo and Madison Nguyen are asking for an exemption for high-rise residential development in downtown.

Mayor Chuck Reed issued a memo later in the day Monday that says the nexus study failed to prove that building more housing causes the need for more affordable housing.

“Without proof of causation, the housing impact fee ‘walks like a tax’ and ‘it talks like a tax,'” Reed wrote. “Why not at least make the effort to prove that there is an impact and avoid the tax fight?”

More from the San Jose City Council agenda for November 18, 2014: