Scroll from the bottom up to read in chronological order. And click here to catch up on the rest of our coronavirus coverage.

A sixth deputy has tested positive for COVID-19, according to a news release from the Santa Clara County Sheriff’s Office. The deputy worked in the jails and was reportedly exposed by one of a few other colleagues who have also been confirmed carriers of the virus. Officials say the officer is isolating at home and the contact tracing to identify any other potential exposures is ongoing. 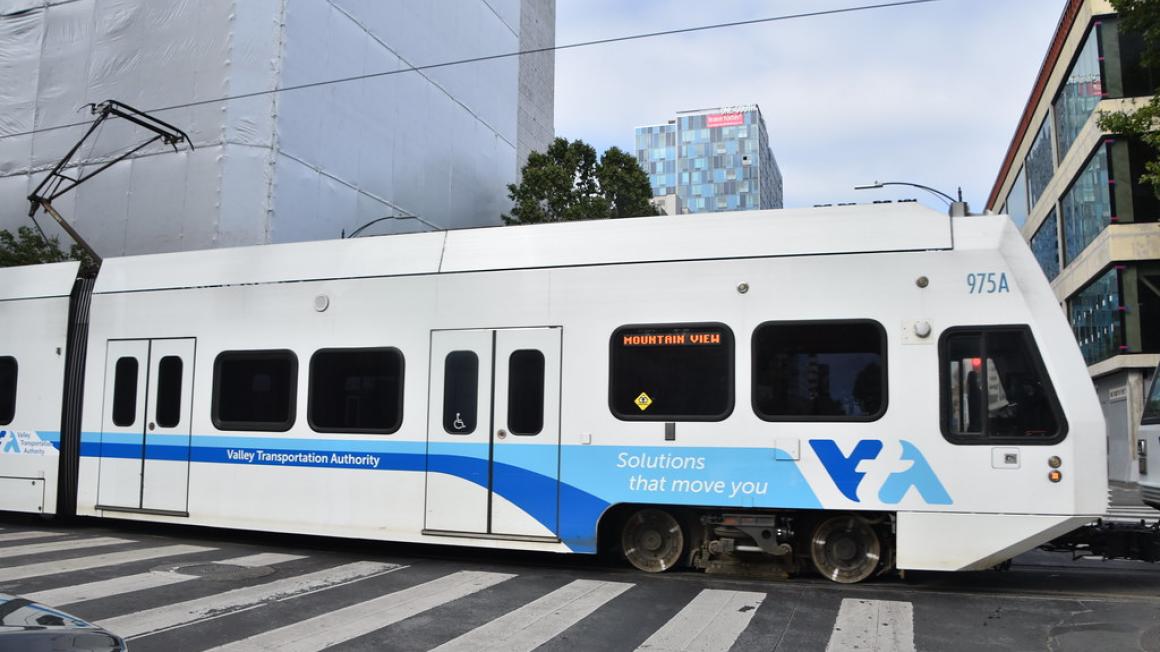 A VTA operator tested positive for COVID-19, prompting the transit authority to suspend light rail service. “While we learn the extent of impact and exposure, we must take swift action to protect the health and safety of our employees and the public,” agency spokeswoman Brandi Childress wrote in announcing the news.

Out of an abundance of caution, VTA took all six light rail trains out of commission. While out of service, they’ll undergo a deep cleaning—as will the entire operating division. “A number of light rail vehicles were sanitized thoroughly and set aside for this potential scenario,” Childress explained.

The exposure coupled with an 82 percent decline in ridership because of the stay-home order led VTA to give light rail a break for now and focus its resources on bus lines.

“We understand the impact and heightened level of concern this latest information will generate,” Childress wrote. “Please be assured we are taking every precaution available to us and coordinating with the Santa Clara County Public Health Department to implement further safety measures and protocols that adhere to the Centers for Disease Control (CDC) guidance on COVID-19.”

To receive the VTA’s real-time service alerts, subscribe to your routes in the Transit app.

Patients between the ages of 41 and 70 make up the biggest share of the tally, with 219 of them confirmed to have the virus. Patients 61 and up total 149 while the county reports 99 in their thirties, 48 in their twenties and 19 under the age of 20.

The local Public Health Department also announced that it will launch a new website on Friday with more detailed data about the COVID-19 cases, which remain artificially low because of a lack of testing. 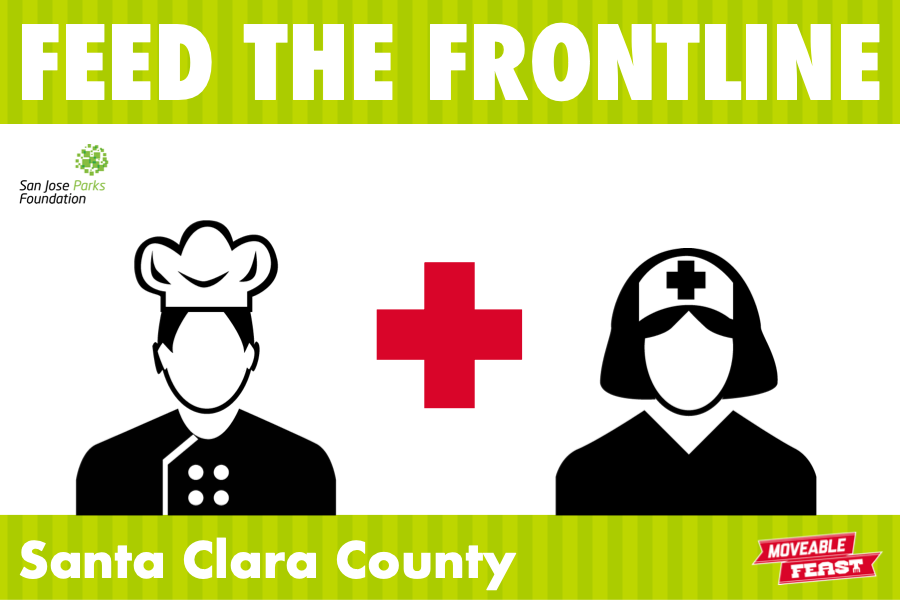 In Silicon Valley, the epicenter of California’s coronavirus outbreak, stay-home orders put eateries out of work and forced hospital staff to labor away around the clock.

A new campaign called Feed the Frontline found a way to help food-service workers by having them support the doctors and nurses at the front lines of the pandemic.

For every $10 donation, the Moveable Feast food truck fleet will provide one packaged meal and a Treatbot ice cream scoop to a healthcare worker. “Not only will this fortify the frontline,” the campaign’s GoFundMe page states, “but also uplift food-service workers, many of whom lack the resources to ride out this unprecedented public health crisis.”

What started last week as a $1,000 gift from Silicon Valley Leadership (SVLG) Group CEO Carl Guardino has snowballed into $4 million raised by a whole host of donors.

But much more is needed, says SVLG spokeswoman Pam Kelly.

The VMC Foundation is still looking for donations for the local hospital system. To find out how to donate and what supplies frontline medical staff need, click here.

Demand for unemployment insurance skyrocketed to a record-smashing 3.3 million claims this week as the businesses shut down to slow the spread of the pandemic. The previous peak since the U.S. Department of Labor (DOL) began tracking this data in 1967 came in the week ending Oct. 2, 1982, when 695,000 Americans filed for jobless benefits.

From March 15 to 21, the California Employment Development Department (EDD) processed 186,809 claims—a huge spike from the week prior, when it fielded just 57,606.

Earlier this month, Gov. Gavin Newsom waived the usual one-week waiting period to sign up while California Labor Secretary Julie Su ordered EDD to streamline claims processing and beef up staffing so they could keep things moving around the clock.

“We know there are many Californians who are really struggling to provide for their families because of the massive economic impact created by the Coronavirus,” EDD Director Sharon Hilliard said in an email sent to reporters today. “Unemployment benefits provide critical financial support and the EDD is employing all means necessary to get benefit payments out to those in need.”

Because of the historic influx of demand, the EDD will post updates online every Thursday, when the DOL releases new claims data.

Don’t be fooled by the empty shelves. There’s plenty of food to go around.

Ron Fong, head of the California Grocers Association, is trying to hammer that point home through a new initiative called Enough for All.

“The bare shelves you are occasionally seeing do not indicate lack of supply,” he says.“It is a temporary result of consumers overbuying given the understandable worry right now. The supply and distribution systems are prepared to accommodate this behavior for a day or two during holidays, but not for extended periods of time.”

The men and women who’ve become frontline workers by staffing our grocery stores and distribution centers are working day and night to catch up, Fong says. And hiring sprees are bringing more people aboard to keep pace with demand.

“Everyone can help stop this unnatural cycle of demand by simply buying only what you need for a week and curbing the tendency to over-buy,” he advises. “Getting shopping patterns back to normal will reduce stress on the distribution system and can go a long way toward creating some normalcy in our grocery stores.”

With that in mind, Fong says, let’s “just buy smart and don’t overfill our carts.” 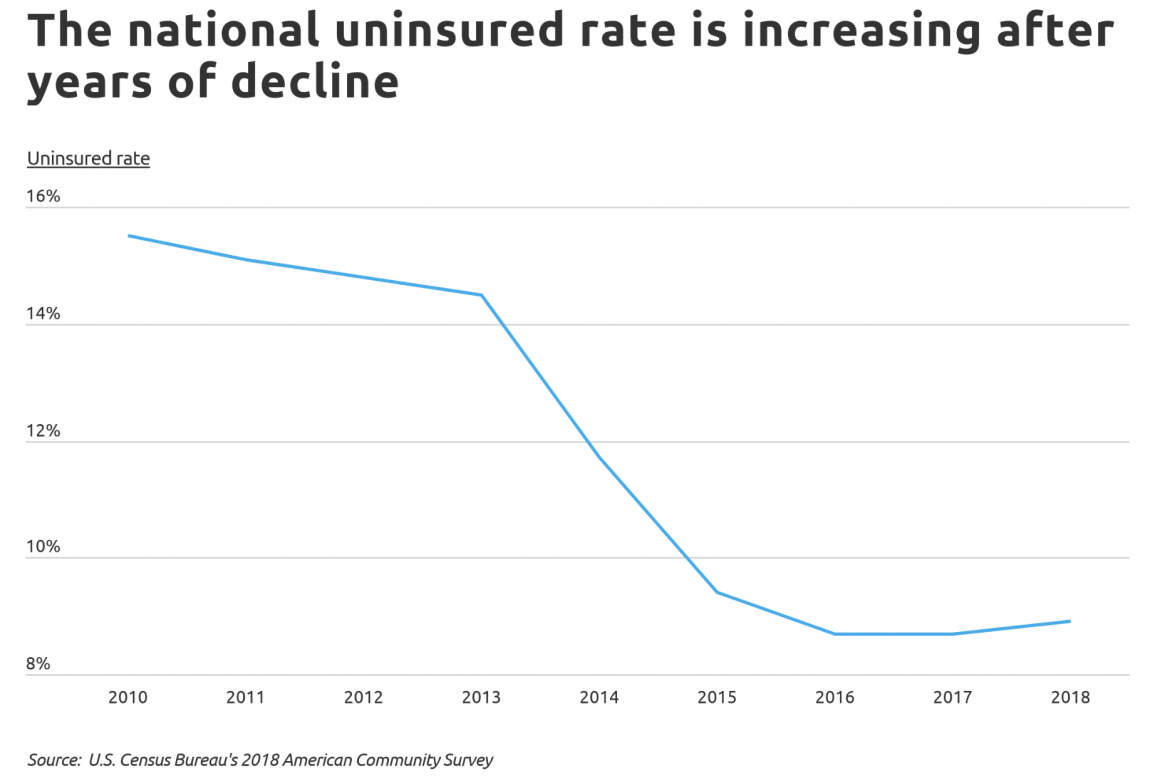 Though San Jose has a lower rate of uninsured residents, a new study shows that an alarming number of the city’s million people have no healthcare coverage. According to credit-building company Self Financial, about 50,000 have no health insurance.

“Efforts to contain the spread of COVID-19 depend on the nation’s ability to provide testing and treatment for all Americans, even the 28.5 million who lack health insurance,” a summary of the study reads.

Yet the coronavirus pandemic comes after a two-year decline in coverage in the U.S. After a seven-year increase in coverage thanks to the Affordable Care Act, the uninsured rate began ticking up again in 2018 after the repeal of the individual mandate penalty.

Click here to read the report and see how various cities and states stack up. 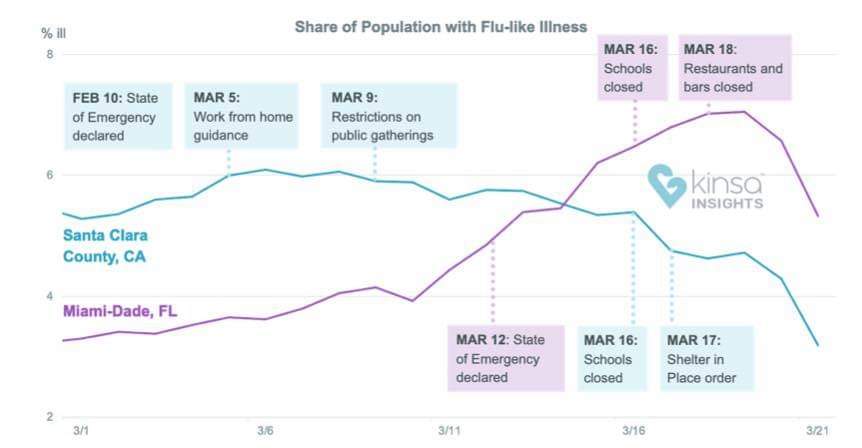 “Don’t think for a second that we’re a day or two from lifting that order. We’re not.”

Gov. Gavin Newsom relayed the message in his latest COVID-19 briefing, where he made clear that California has no plans to grant President Trump’s wish of getting back to business as usual by Easter Sunday.

There’s just no way, the governor said. Not now, as the death toll careens upward, and hospitals already overrun with gasping coronavirus patients brace for the storm.

That’s because what we’re doing is working.

The social distancing, the staying home, the discipline required for millions of us to hunker down—it’s doing what it’s supposed to. It’s flattening the curve.

“We can’t let up on the good decision-making that we’ve seen,” Newsom said. Later in the address, he added: “We know it’s had an impact … so let’s not let up. Let us commit to this home isolation and physical distancing.”

Since containment’s no longer an option, mitigation’s the name of the game. And though a lack of testing means we’re blind to the full scope of the problem, we’re not entirely in the dark. Data show that the Bay Area’s sweeping shutdown has prevented infections and saved lives. Just look at the graph above to see how this region has fared compared to one that notoriously lagged on enforcing distancing mandates.

“We don’t live under assumptions,” Newsom told us the other day. “We live under real data trend lines—and real application.”

Last night, Santa Clara County Executive Jeff Smith called me to follow up on an email I’d sent earlier in the week about the local public health lab’s testing capacity. When I asked him what message he’d like to get out there more than anything, he reiterated the governor’s mantras about social distancing.

The single most impactful thing people can do right now is to keep this up, Smith said, promising that the effect of collective lockdown will become more apparent in the coming weeks. “Social distancing is working,” he said. “It will work. But we really don’t have time with this crisis to be fooling around.”

I told him to keep me in the loop if there’s any data to share or stories to tell which illustrate that point, because I believe the more we inform people about what’s going on, the more they’re invested in doing their part.

Showing people how the stay-home mandate is working might encourage them to stay the course. And being transparent about the county’s limitations—like the dearth of testing resources—might spur people to rise to the occasion.

All the stories we’ve seen about the critical shortage of ventilators have inspired creative minds to figure out ways to hack the machines and companies such as Tesla to re-open their factories to manufacture them. By being open and honest about rationing masks and other protective gear, hospitals have prompted a public outpouring of donations.

As journalists, we aim to hold people in power accountable. Of course. But a lot of our job is more simple than that. We’re just trying to tell people what the heck’s going on.

Sometimes that requires scathing takedowns. Most of the time, it’s just sharing the latest updates, like new case counts or how many masks our hospitals need. It also involves reporting the good news, highlighting solutions and telling personal narratives.

I say all this because I want our readers to think of all the different stories we could cover (with our limited resources) and to send us tips that point us in the right direction. I want to hear from you. So, text me at 408.515.7611 or email [email protected] as inspiration strikes. Nurses, doctors, frontline workers: I can promise confidentiality.

And if you value our journalism, consider helping us through these trying times by making a donation or buying a subscription at supportyourlocalnewspaper.com.