The pressure is mounting.

The first day of a rolling strike by Santa Clara County service employees—the first one in four decades—caused minor disruptions and involved an estimated 700 participants.

On Thursday, the second leg of a protest by SEIU Local 521 members, the union canceled negotiations with the county while as many as 1,200 workers took part in the strike. Enough employees walked out that the county had no choice but to close a couple health clinics and pharmacies. Valley Health Center sites in Milpitas and Sunnyvale went dark for the day, which required a host of patients’ appointments to be rescheduled.

And on Friday, the picketing will likely continue at a different work site, SEIU Local 521 spokesman Victor Gamiz said. “A general all out strike is not ruled out,” he said. “We’ll strike for as long as it takes.” 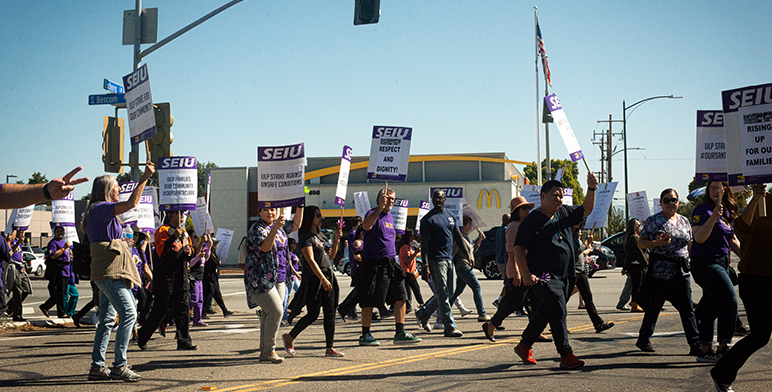 SEIU members marched through the streets with purple signs decrying “unfair labor practices” by the county. (Photo by Nicholas Chan)

As the work stoppages crank up the heat on County Executive Jeff Smith—who dismissed the union’s demands for higher pay as untenable—SEIU roped in some high-profile allies to amplify the call for a more generous labor contract.

Rep. Ro Khanna (D-Fremont) made an appearance at the county’s Department of  Family and Children’s Services (DFCS) in a show of solidarity with the strikers. “My hope,” Khanna said, “is that the county will say, ‘We have to do more for our workers—especially the workers who take care of our seniors, the disabled, the vulnerable—and raise their wages so they can afford to live here.’”

“I’m making less here than I did 30 years ago in New York City as an executive assistant with a PR firm,” 71-year-old VMC administrative assistant Sandra Mallory said. “I joke that I’m going to die at my desk.”

VMC accounting clerk Mateo Uriarte echoed Mallory’s bleak sentiment, describing how meager salaries and staffing shortages have plagued his department for too long. “The only way we can make ends meet is by working overtime,” he lamented. “But when we work more hours, we can’t be with our families. In my office, we have vacant positions that can’t be filed because we can’t offer competitive wages. That means the claims aren’t processed and hospital revenues aren’t billed.”

Picketers said the county’s latest offer of 3 percent raises each year for the next five isn’t enough. (Photo by Nicholas Chan)

Smith said the county acknowledges the pain of being short-staffed, and it continues to actively recruit for vacant positions. The county’s latest offer to SEIU after five months of negotiations—a 3 percent raise in each of the next five years—should make it easier to attract new hires.

County Counsel James Williams, however, said the union’s criticism is based upon a misperception about the county’s offer. “People don’t understand why 3 percent over 5 years is 16 percent,” he explained. “It’s compounded and that’s more than 15 percent.”

In that sense, Smith added, the county’s proposed raises would exceed the inflation rate.

County Chief Operating Officer Miguel Marquez said that the labor agreement has to be prudent enough to weather the all-but-inevitable likelihood of an economic downturn. “Think about the county’s core mission: we’re the safety net,” he said. “It means we need a long-term, sustainable contract and not go out of business in two to three years.” 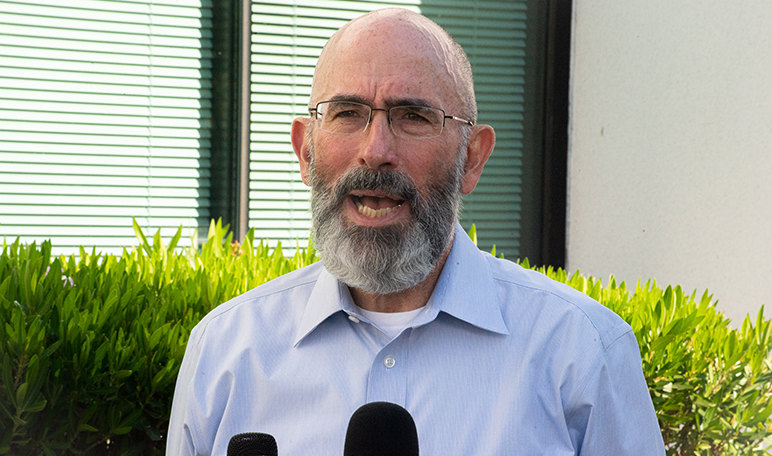 Another point of disagreement between the union and the county involves employee benefits. “They want us, for the first time in county history, to pay 2 percent of our healthcare premiums,” Uriarte said. “It’s unprecedented.”

To that point, Smith countered: “It’s at the most about $10 per month for most people. It’s on the table, but it certainly can be negotiated off the table.”

But negotiations have ceased for the time being. And Smith said he’s bracing for a prolonged service disruption because of the strike. As on Wednesday, however, he disputed the union-estimated number of strikers, saying that only about 250 people took part in Thursday’s demonstrations.

“The county is prepared for it to last for many weeks,” he told reporters at a press conference Thursday morning. “They don’t seem to have an end game. Their only end game is, ‘Give us more money,’ which isn’t available. You can’t negotiate with someone who has alternative facts.”

The county set up a landing page for updates about the strike. Click here to learn more about the latest developments and how the protest affects day-to-day public services.