Of the few-hundred-or-so people who lived in San Jose's largest homeless encampment, called "The Jungle," 166 have found stable housing, according to the city. Another 70 have housing subsidies but are still searching for a home with help from a case manager. Twenty-four found jobs.

In dismantling The Jungle last December, city officials leveraged public and private resources to find work and shelter for the people who lived in the Coyote Creek camp and vaccinations for their pets.

"[S]taff utilized the place-based model to bring as many resources as possible to the site," San Jose's Acting Director of Housing Jacky Morales-Ferrand wrote in a progress report on the effort. "While the project was originally funded to serve only 100 participants, the end result of this collective impact work will mean that well over 200 homeless residents will be placed into permanent housing with extended support."

The city plans to use that approach as a model for dealing with other encampments.

San Jose claims one of the largest unsheltered populations per capita in the nation. A 2013 count found that 4,770 homeless people live in San Jose—an 18 percent increase from two years earlier. Most of them lived along creeks and rivers, in cars or on the street. For years, the city worked with the Santa Clara Valley Water District to clean up the trash and human waste from the hundreds of homeless camps within city limits and tried to connect people with housing and supportive services.

Still, the number of camps continued to grow.

In 2013, the city allocated $2 million to house people who lived along the region's waterways. It earmarked another $2 million in each of the next two years to continue the program.

City officials in summer 2013 chose to focus on The Jungle because it was by far the region's largest homeless camp and the subject of international media attention. They identified 200 camp residents to help, though some estimates put the actual population of the camp much higher.

"The team selected this location because of its significant impact on the health and safety of the people who lived in the encampment and in nearby neighborhoods and the potential detriment to the environment," Morales-Ferrand wrote. "The site was also easily accessible to service providers, law enforcement, and encampment abatement crews, thus allowing the project to more readily provide its full complement of programming and services."

Some homeless advocates, however, have been sharply critical of the Jungle cleanup.

"People who were evicted from the Jungle have moved and been displaced over and over with no end in sight," said Sandy Perry, head of the Community Homeless Alliance Ministry. "Some moved to the Walmart parking lot, then Roberts Road, then south of Tully, then to Phelan at the railroad tracks, then to north of Tully, then to Monterey Highway, then to Almaden Road, and they are still moving."

Perry planned a rally for Monday afternoon after a woman evicted from The Jungle had her tent bulldozed after relocating to a site along Story Road. He said the situation will get worse this week because Santa Clara County's winter shelter program will discharge another 270 homeless people on the streets.

In the 18 months since the summer of 2013, San Jose tapped into more than 100 subsidies to find housing and support for Jungle residents. Still, finding permanent housing has been an uphill battle in a competitive rental market. Homeless clients, many with barriers such as pets and criminal histories, had to compete against people with much stronger tenant credentials.

Because not everyone found permanent housing, the city reserved 60 shelter beds for people displaced after the camp's dismantling.

Leading up to the camp's closure this past winter, the city also tried to address environmental concerns. Coyote Creek had become awash in human waste and rotting trash, which led state regulators to file complaints and issue fines against the city for failing to adequately clean up local waterways.

For a period of time, the city placed a few portable toilets in the camp. After they were removed over concerns about vandalism and other illegal activities, outreach workers handed out bags for human waste.

To prevent people from settling back along the creek banks, the city erected 1,500 feet of steel fence and deployed off-duty police officers to patrol the area. So far, 18 people have been arrested because of those patrols.

Though there were some drawbacks—mainly a dearth of affordable housing—the city plans to replicate the approach at other homeless camps. Over the past year, outreach workers have identified nearly 300 other camps, some of them populated by more than 20 people.

Here's a link to the entire report. 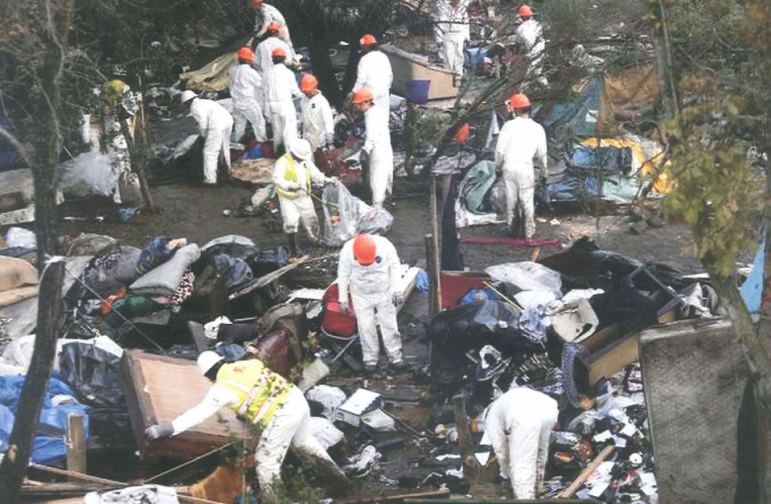 Workers clear out hundreds of tons of trash from the Coyote Creek encampment. (Photo via City of San Jose)