More than a century before YouTube, the man who gave us the lightbulb and the phonograph shot one of the first cat videos. The grainy 1894 clip produced by Thomas Edison’s movie studio depicts a pair of feline pugilists. With forepaws capped in boxing gloves and harnesses hoisting them onto their hind legs, the inventor’s cats scrap lazily in a miniature ring. That black-and-white footage languished in the Library of Congress before its inevitable digital rebirth as a 22-second loop on YouTube.

While the Internet popularized the cat video with its attendant memes, salable kitsch and viral stars, the genre—if one could call it that—dates back to the inception of cinema. For reasons probed by social science and debated by cultural critics, we have long obsessed over cats. Thanks to 20th century veterinary advances like vaccines, flea meds and sterility, we turned mousers into house pets. We then coddled, sketched, animated and filmed them. Yet in the past decade, with the advent of cheap cameras and online video sharing, that fascination has reached fever-pitch frenzy.

Now, the phenomenon that spawned a global online community of shameless cat lovers has stepped back to reality. The Internet Cat Video Festival, which began as a social experiment by the Walker Art Center in Minneapolis three years ago—to see if something so patently of the Internet could manifest in real life—has spread to more than 130 cities. On Sunday, it touches down at San Jose’s Camera 12 Cinemas.

An hour-long reel will feature kitties from around the world, including ennui-addled Henri le Chat Noir, gravity-defying Hover Cat and maybe a live appearance from the South Bay’s own Dusty the “Klepto Kitty.” Costumes are encouraged, of course, with the promise of prizes. As a city-sponsored event, the kitty klatch will showcase local animal resources, adoptions, catch-and-release efforts and other cat-related nonprofits.

“I’m curious to see how this turns out,” says Oliverio, who rescued two tabbies, “Italian girls” Bellina and Gigi, from a local shelter. “There’s so much popularity around this right now, especially as the population changes. Increasingly, people don’t have kids, so their animal companions become more important to them.”

That cats have become compact, low-maintenance replacement children might explain part of our strange devotion. Though the latter-day cult of cat, which commands billions of views and countless memes, holds such universal appeal that it’s prompted serious academic inquiry.

“It is kind of odd when you think about it,” admits Will Braden, a Seattle filmmaker who curated the festival’s cat clip reel by enduring the eye-stinging task of watching 25,000 submissions. “Why cats and not some other animal?”

A prevailing theory suggests that cats rule the Internet for lack of a public social space in the real world. Dogs and their masters can mingle at dog parks. Cats and their humans, for the most part, stay close to hearth and home.

“The Internet became a de facto cat park,” says Braden, creator of the critically acclaimed Henri le Chat Noir videos, whose titular house cat muses on life’s meaninglessness. “You watch these videos and think, ‘I thought my cat was the only one that did that.’ How else would you know? It becomes sort of an inside joke. There’s a sense of connection around that.”

When the Walker Art Center hosted the first cat video festival in 2012 on a lark, organizers expected several hundred attendees at most. More than 10,000 people showed up.

“The festival took something sort of solitary, like watching a video, and made it social and interactive,” says Braden, whose Henri 2: Paw de Deux, which the late Roger Ebert deemed “the best Internet cat video ever made,” won that year’s Golden Kitty Award. “It got such an overwhelming response. A lot of reporters came with condescension and sarcasm, wondering why anyone would pay to see something they could watch for free on YouTube. Now, of course, that question seems ludicrous. That’s kind of like saying, ‘Why would you go to a live event?’”

Three years out, hipster cynicism has worn away—supplanted by sincere, starry-eyed appreciation for the mood-lifting spectacle. As the festivals proliferate throughout the United States and internationally, the novelty has begun to wane while the general public accepts elaborate expressions of cat worship as a given.

“Years ago, there was still a stigma of the ‘Crazy Cat Lady,’” Braden says. “These videos were getting billions of views, yet people wouldn’t openly talk about watching them. But it’s impossible to stand in a field of 10,000 people and be embarrassed of being a cat video fan. It’s funny to me that online cats have gone from this oddity to a wildly popular mass media.”

In 2014, YouTube counted 2 million cat video uploads and a staggering 26 billion views. With such a broad reach, deceptively flippant phenomena like Caturday, LOL cats, America’s Funniest Home Video-style blooper reels and an entire industry of feline celebrity merit critical analysis, according to Indiana University researcher Jessica Gall Myrick. Something so far reaching, the logic goes, must tell us something about humanity. 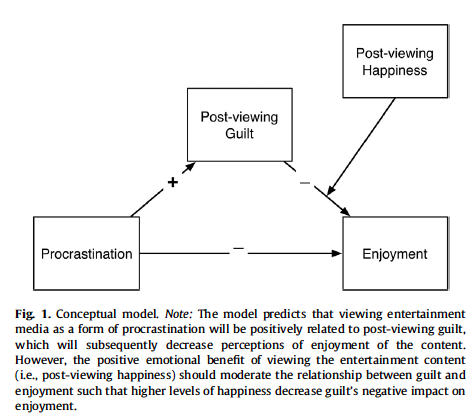 “In the modern era of digital media, it is hard to deny that cats have clawed their way into the zeitgeist of the Internet,” Myrick wrote in her 2015 study, Emotion Regulation, Procrastination, and Watching Cat Videos Online: Who Watches Internet Cats, Why, and to What Effect?

“While the topic of online cat-related media consumption may seem, on the surface, a light hearted one for serious academic inquiry, the global popularity of such media and the historical roots of feline-focused media should encourage Internet, media and psychology researchers to take note.”

In a survey of 7,000 people, Myrick found that despite the guilt of wasting time on another viewing of Ninja Cat, people generally watch cat clips as a form of digital pet therapy. Most of the time, the study found, they indulge during work or study time, which might make employers cringe, but there is an upside.

“Even if they are watching cat videos on YouTube to procrastinate or while they should be working, the emotional payoff may actually help people take on tough tasks afterward,” Myrick says.

Watching dogs, gerbils or fainting goats might yield similar therapeutic benefits, but cats possess unique traits that make them the go-to online diversion. They’re at once independent and powerless, curious and aloof, mysterious and adorable. Another theory holds that cats as depicted online appeal to the proclivities of late-capitalist culture.

Cuteness, per Stanford University English professor Sianne Ngai, has become a commodity aesthetic linked to consumption. Cuteness—which she calls an aesthetic of powerlessness, deformity and bumbling pratfalls—makes us want to buy stuff. In her book, Our Aesthetic Categories: Zany, Cute, Interesting, Ngai describes how society has shifted its reverence for the beautiful, just and sublime to the comparatively lowbrow aesthetic of squee! Our perception of cats has adapted to this shift in collective taste. 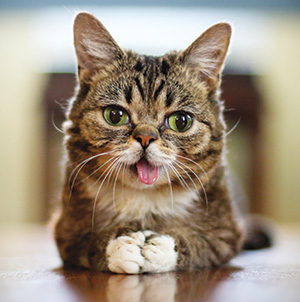 “YouTube speaks a tale of cat-ness thoroughly at odds with feline history,” Los Angeles-based curator Sasha Archibald wrote in the book Cat is Art Spelled Wrong, a collection of essays inspired by the Internet Cat Video Festival. For centuries, cats in art and literature evoked danger, autonomy and inscrutability. Today, they’ve morphed into what she calls the “cute icon extraordinaire,” a reflection of our consumer sensibilities.

Cute isn’t all warm, fuzzy and wide-eyed, Archibald asserts. Cute is addictive, a quick fix we crave. There’s something dark about the aesthetic, too, a dimension of cruelty. Cute is sadistic, compelling us to both smother and croon, to fetishize helplessness. Lil’ Bub, an Internet A-lister, looks permanently kittenish because of physical ailments that restrict his mobility, bug out his eyes and jut out his tongue. Grumpy Cat, who has her own line of clothing and three published books, suffers from dwarfism.

In some sense, cat videos have become a visual “junk food,” a guilty pleasure responsible for who knows how much lost productivity. Joyce Carol Oates—who as one of the most prolific authors of our time has clearly resisted the temptation to procrastinate—lamented the cat craze for turning our brains to mush. “I have seen the best minds of my generation destroyed by kitten videos,” she quipped on Twitter.

I have seen the best minds of my generation destroyed by kitten videos.

A few years into this #CatVidFest hoopla, however, Braden believes cat-centric media will grow more sophisticated and meaningful. “Obviously, the most popular viral cat videos tend to be those quick candid clips taken on a camera phone,” he says. “But we’re seeing more original work, too, and a lot more production value. That may very well have an effect on traditional cinema.”

Critics will debate the nature of the art and ponder what our affinity for all things feline tells us about the human condition. But for many, if not most of us, cat videos are just a fun, dumb distraction. That’s not such a bad thing. 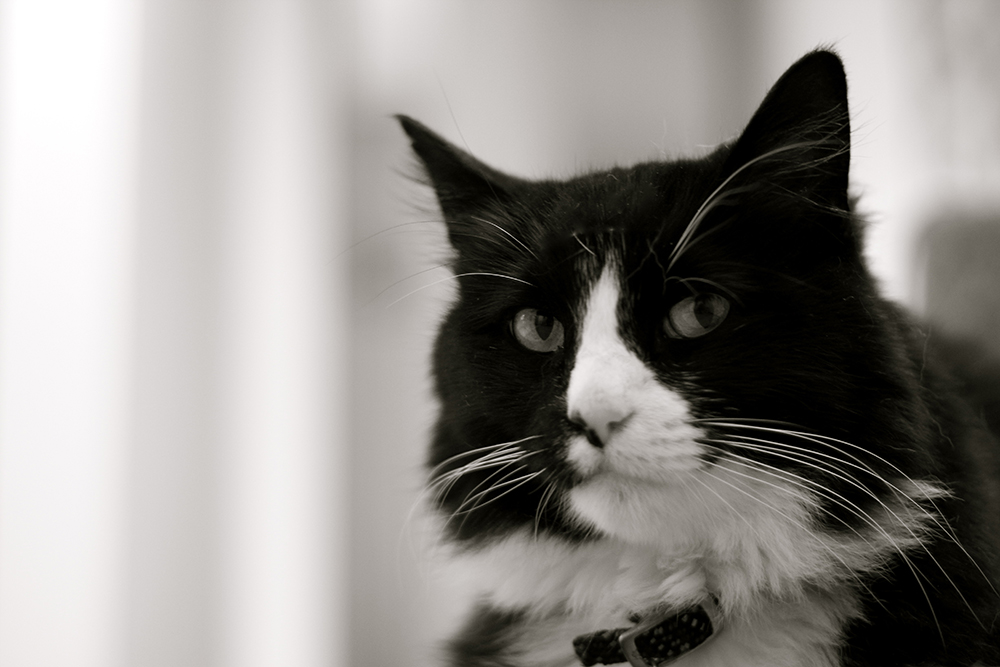 Henri le Chat Noir, whose existential crisis has endeared him to millions, is one of many felines who rose to fame in the age of the Internet cat.