UPDATE 6pm Nov. 26: Eric Bauman will take a leave of absence, effective Monday, to ensure the independence and integrity of the investigation, Cal Dem officials announced. Second-Vice Chair Alex Gallardo-Rooker—who was also reportedly investigated for taking money from the dialysis industry to oppose Prop. 8 without disclosing the contributions—will serve as interim chair. 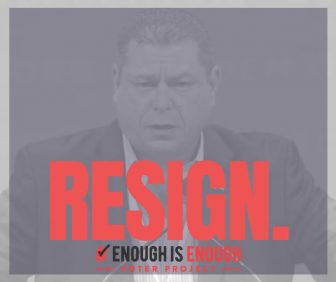 “Chair Bauman believes this decision is the best way to ensure the independence and integrity of the process,” party spokesman Michael Roth wrote in a news release forwarded to reporters Monday evening. “The party is confident that the procedures in place will allow for all parties to come forward freely and provide for a thorough and complete review.”

The California Democratic Party took a full day to publicly address claims that its top official sexually assaulted and harassed several men. When Cal Dem finally got around to issuing a response Saturday night, it had the accused—Chairman Eric Bauman—speak on the organization’s behalf.

“I take seriously any allegations brought forward by anyone who believes that have been caused pain,” Bauman said in an email to reporters about 24 hours after the claims began circulating on social media. “To that end, a prompt, thorough and independent investigation of the allegations has been undertaken by a respected outside investigator, ensuring these individuals making the charges are treated with respect and free from any concerns of retaliation.”

He promised that the party would model how to react to these kinds of allegations, to ensure fairness and determine truth. He assured that there are procedures in place to deal with these issues and that an independent law firm would make sure they’re followed. “I look forward to putting these allegations behind us and moving forward as unified Democrats,” Bauman concluded.

Absent from the statement was any denial. Or much in the way of specifics. It didn’t name the outside counsel that would review the claims, although the Los Angeles Times reported today that Debra Henshaw Vierra from law firm Churchwell White was assigned to the task and party spokesman Michael Roth confirmed as much in a follow-up email. It said nothing about whether Bauman would be placed on leave pending the investigation; nothing to inform potential victims about how to report misconduct.

A statement from the Cal Dem Women’s Caucus, led by Christine Pelosi, at least made a point of expressing support for survivors. “The California Democratic Party Women’s Caucus believes that each and all of us—especially party leaders—must create a culture of dignity and respect and use our powers to fight harassment, discrimination, bullying and abuse,” it read. “We support victims coming forward with a path to justice, due process, and transparency so that our party can do the hard work of building a culture of respect and equity for all. We urge anyone affected by this situation to pursue confidential crisis counseling through the RAINN hotline 800.656.HOPE.”

While the state party closed ranks, the California Young Democrats echoed the Women’s Caucus by saying they stand with survivors.

Here is our statement re: Sexual misconduct allegations against the @CA_Dem Chair. Drafted in collaboration w/ our caucus chairs and passed unanimously by our board. CYD stands united with survivors against harassment and intimidation. #metoo #believesurvivors pic.twitter.com/8N79gPrD4L

Accusations against Bauman—the state party’s first openly gay chairman and a veteran political activist from Los Angeles—came just weeks after Democrats celebrated huge victories at the ballot box. They trace back to a letter penned by Cal Dem second-Vice Chair Daracka Larimore-Hall, the party’s third-in-command, who said two staffers approached him at the prior weekend’s executive board meeting with “serious and credible” charges that Bauman sexually assaulted and harassed men at political functions and tried to intimidate them into silence. Some of the claims reportedly involve excessive drinking and stem from events leading up to the midterm elections.

Sources who spoke to San Jose Inside in recent days said Bauman’s misconduct was well known and long known among party officials, and that multiple board members tried to get Bauman to undergo counseling.

A political operative who worked with Bauman years before he became party chair, said several young men he worked with at the time warned each other about their boss and would decline his invitations to join him on the office rooftop smoke breaks. “His M.O. was always the same,” the former staffer said. “Get you alone. Get really close. Grab your shirt collar. Try to look down your shirt and tell you how he’d like to ‘fuck your brains out’ of other crude, inappropriate language. We just tried to avoid being alone with him.”

In the days since San Jose Inside reported on the claims brought by Larimore-Hall, several Dem Party chapters throughout the state have called on Bauman to step aside for the duration of the investigation—or to resign altogether. Dave Campos, who chairs the San Francisco Democratic Party and works as a deputy Santa Clara County executive, told the Bay Area Reporter that he believes Bauman should take a leave of absence.

Meanwhile, a number of party delegates have reacted to them by rehashing the race between Bauman and Kimberly Ellis, his more progressive challenger who lost the chairmanship by a margin of 62 votes out of a total 3,000 in 2017. Others wondered about the timing and veracity of the claims, or questioned the motives of the accusers, of Larimore-Hall and pretty much anyone  else who amplified the allegations.

Rep. Ro Khanna (D-Fremont), whose late-Friday tweet about Larimore-Hall’s memo introduced the controversy to a wide audience, fielded criticism for politicizing the issue by using it to promote his preferred chair: Stanford University law professor Michele Dauber, a renowned scholar on gender equity, head of the Enough is Enough Voter Project and leader of the nationally watched Recall Persky campaign.

There is no one who has done more for victims than @mldauber. She led the Emily Doe effort on the Brock Turner case. We need better procedures to protect victims, and we need folks like Dauber in leadership to improve California’s process and clean house.

Dauber thanked him for his support, but said her focus is on ensuring justice for the victims and making sure the Democratic Party improves the way it responds to these kinds of allegations. For one thing, she argued, it’s inappropriate that the party’s first public statement about the allegations came from the accused.

That last sentence really illustrates the issue with the accused making the press stmt. "Can't wait to put this behind us" is not an appropriate statement for the organization to make at the start of an investigation of potentially serious and even possibly criminal misconduct.

As chairman, Bauman has been outspoken about sexual misconduct allegations against California Democrats, including state lawmakers Raul Bocanegra, Matt Dababneh, Tony Mendoza and Cristina Garcia. After Bocanegra’s and Dababneh’s resignations, he told Politico last year, “Sunlight is being shined down upon this situation, and I think we will actually see real and legitimate change in both the Assembly and the Senate.”

In recent days, however, the party has been criticized over its lack of transparency when the allegations involve Bauman. Omar Torres, an elected member of Cal Dem’s executive board representing Assembly districts in Santa Clara County, said he was disappointed by how slow the party was to respond. Especially considering that Larimore-Hall informed them of the claims several days before his “statement of charges” memo leaked.

“I have been texted, called and emailed from various state delegates about these accusations and not our party leadership,” Torres told San Jose Inside over the weekend.

It looks like @CA_DEM is closing ranks, and doubling down on the CODE OF SILENCE that helped breed a toxic culture of intimidation and enabled a workplace ripe with abuse of power. ??? https://t.co/EOkHBg2CTq

Larimore-Hall and the Women’s Caucus volunteered more information than the party’s spokespeople. In a second public letter about the allegations released Saturday morning—several hours before Bauman’s email—he offered additional details about what led to him filing a complaint against the party chair and initiating the process to replace him.

“During the weekend of the recent CDP Executive Board meeting, I was approached by a number of Party staff who confided in me their stories of sexual harassment and assault by Chairman Eric Bauman,” he wrote. “Their stories are devastating. I believe them. I will forever be inspired by the bravery of these young political professionals, many of whom are at the very beginnings of their careers. I am in awe of their support for one another and by their fierce determination to stand together for justice.”

He asked fellow Democrats to honor the accusers by respecting their wish for privacy.

“Obviously, it is completely unacceptable for Chairman Bauman to remain in office given these credible, corroborated and utterly heart-breaking allegations,” Larimore-Hall continued. “That is why I initiated a complaint within the California Democratic Party Human Resources Department, and also called on Eric Bauman to resign as chairman of the California Democratic Party.”

After Bauman ignored his demand to bow out, Larimore-Hall said, he filed charges for his removal with party Secretary Jenny Bach.

“As a vice-chair of the California Democratic Party, I will not tolerate sexual harassment or assault on any level,” Larimore-Hall wrote. “And once a thorough investigation is conducted, we must work to ensure this never happens again.”

According to the party’s bylaws, Bauman has 10 days from receiving Larimore-Hall’s “statement of charges” notice to resign or respond. If Bauman chooses to step down, Vice Chair Alexandra Gallardo-Rooker would fill his role until the party elects a new chair at its next executive board meeting in May.