Myrick was last seen at GP Sports, the Cambrian-area motorcycle shop where he worked, on Jan. 22, according to the San Jose Police Department. His coworker, 39-year-old Steve Douglas Hlebo, was arrested the next day on suspicion of murder.

Police say they found the body—confirmed by the Santa Clara County Coroner as Myrick’s—off of Jamison Creek Road in the Santa Cruz mountains.

The discovery wrapped up a week of organized dawn-to-dusk searches led by Myrick’s family and friends. Volunteers, who drummed up support using the hashtag #FindKyleMyrick, set up a fundraising drive to help his family offset the cost of the search.

Hours after police found the body, mourners met under a light rainfall at GP Sports for a candlelight vigil. A group of bikers revved their engines in honor of Myrick, a motorcycle enthusiast and gearhead who only recently began working at the shop.

People lit candles by GP Sports, where Kyle Myrick worked and the last place he was seen alive. (Image via Facebook)

“The police found our son today,” Myrick’s stepdad John Sparry wrote on Facebook Thursday. “We are extremely sad, but knowing he is no longer lost is a great comfort. Kyle is in a good place now.”

Police say Hlebo and Myrick got into a fight while working on an ATV together at GP Sports. Even before Myrick’s body was found, investigators say evidence at the crime scene—a severed ear and pools of blood—led them to suspect murder.

On Wednesday, Hlebo appeared in court for a brief arraignment. In a series of bizarre interviews from jail, Hlebo professed his innocence.

“I have nothing against the guy,” Hlebo told the Mercury News earlier this week. “I have no idea why I’m here. They just stuck me in the damn cell.”

He reportedly accused Myrick of being part of some conspiracy involving the high-profile kidnapping and killing of Morgan Hill teen Sierra LaMar.

“I was framed,” Hlebo said in a separate 45-minute conversation with NBC Bay Area. “I am innocent. It’s something out of a science fiction novel, really.” 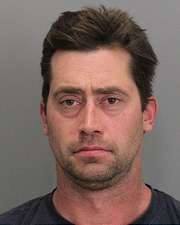 According to a statement penned by San Jose Sgt. Paul Hamblin and Detective Jason Tanner, however, Hlebo killed Myrick after a scuffle, dragged his body into a truck and dumped it in the mountains south of San Jose.

On Jan. 22, per the police report, the manager of GP Sports told Hlebo and Myrick to work on some ATVs out back. When the supervisor later went to check on them, he found the gate locked. Myrick was nowhere in sight and Hlebo reportedly said he didn’t know where he went.

Hours later, the manager began to worry. When he checked again, police say, he saw the suspect’s white 2002 GMC Sierra pickup backed against a nearby fire-damaged building. Hlebo reportedly gave a nonsensical excuse for his truck being there and objected to searching for Myrick in there because it might be haunted by ghosts.

Once the shop closed that evening, the boss and other employees searched the fire-gutted building, where “they discovered a great deal of fresh blood on the walls and floor and contacted the police,” according to the detectives’ report. The blood was splattered on the walls and smeared, the report says, as though a body had been dragged to where Hlebo’s truck had been. That’s where officers reported finding a disembodied ear.

Cops waited for Hlebo at his Los Altos home, where he arrived hours later at 2am. Upon serving a search warrant, police say they found his truck’s cab drenched in blood. The suspect told police he got into a fight with Myrick, but, according to court documents, did not confess to murder.

The San Jose Police Department asks that anyone with information about the case call Sgt. Hamblin or Detective Turner at 408.277.5283. To call in anonymously, call Crime Stoppers at 800.947.7867.

Hlebo, who’s being held in San Jose’s Main Jail without bail, is scheduled to enter a plea on Feb. 16.