Cambrian Park Plaza’s massive redevelopment plans have been one of the most contentious issues on San Jose’s West Side for the past four years, but a new proposal this week may finally put the issue to rest—mostly.

The 18-acre, 170,000-square-foot shopping center at the corner of Union and Camden avenues is the largest project in the pipeline for the city’s ninth district, where Councilwoman Pam Foley has made it one of her top issues since her 2018 election win.

At that time, a 2017 proposal for the site still had residents frustrated, she said.

“I attended those meetings and saw the proposal, and the original proposal wasn't good,” Foley said. “It was boxy, it was ugly, it did not take into consideration Cambrian at all.”

Now, the plan includes a central park and plazas, new bicycle paths and a promise to keep the historic carousel sign front-and-center on the property.

Foley’s neighbors and constituents are singing a vastly different tune since the project was unveiled again Wednesday.

“We've had mostly people that are thrilled,” she said. “One guy said ‘Great, can you build it now?’ … I haven't heard a lot of negative concerns, though I'm sure they'll come.” 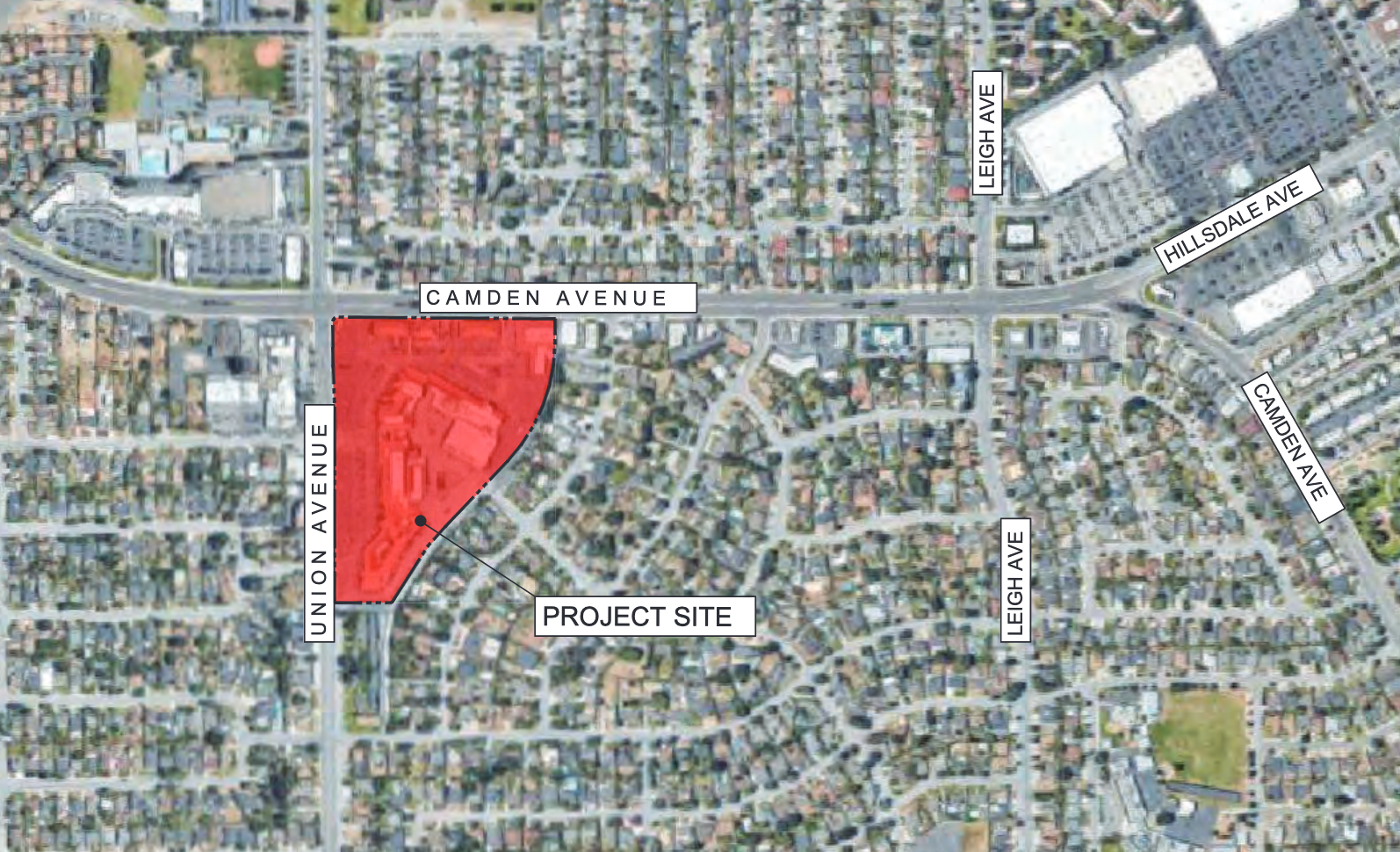 The red indicates the 18-acre, 170,000-square-foot shopping plaza where the redevelopment would happen. If approved, Weingarten Realty intends to start construction in 2022 (Image courtesy of city of San Jose)

The new proposal by Houston, Texas-based Weingarten Realty halves the retail previously proposed, but boosts public park space by more than four times what was promised in the 2017 plan.

Most of the 1,469 parking spots have been pushed underground, making more space for 229 hotel rooms, 378 homes and 154,680 square feet in an assisted living building.

Weingarten officials said it was too soon to estimate how many assisted living homes would be built on site.

Instead of the nearly 109,000 square feet of retail space previously envisioned for the property, Weingarten is proposing about 58,000 square feet. Most of that will be on the ground level of the proposed six-story apartment building.

Some of the retailers in the plaza today could come back, according to a statement by Meagan Froehlich, Weingarten’s marketing director.

But plans submitted to the city show the retail spaces are slated to be relatively small, spanning between 1,080 and nearly 5,000 square feet. That means larger retailers on the site, such as Dollar Tree and BevMo!, may have trouble squeezing back in.

The project also includes a hotel and an assisted living facility, both rising about four stories. Also in the mix will be 25 townhomes and 48 single family houses.

Weingarten proposed a major overhaul of the 18-acre Cambrian Park Plaza that would include three main buildings and a slew of townhomes and single family homes. (Image courtesy of Weingarten Realty)

Weingarten’s new plan, the developer said, is based on years of community feedback and is the final iteration of what it can do with the project, which it hopes to get approved next year and start constructing in 2022.

“This plan is not just another iteration—or something close to it—it is the best Weingarten can do,” Froehlich said. “We rose to the design challenge and believe we far surpassed what anyone has realistically asked for in this mixed use village.”

The Cambrian Park Plaza is considered a “Signature Project,” because while the area where it is proposed is slated to become a dense urban village someday, those city planning documents aren’t quite done.

To move forward early, Weingarten must meet a handful of extra demands, including offering a slew of  community benefits and amenities—requirements they’ve matched in their new proposal, Foley said. 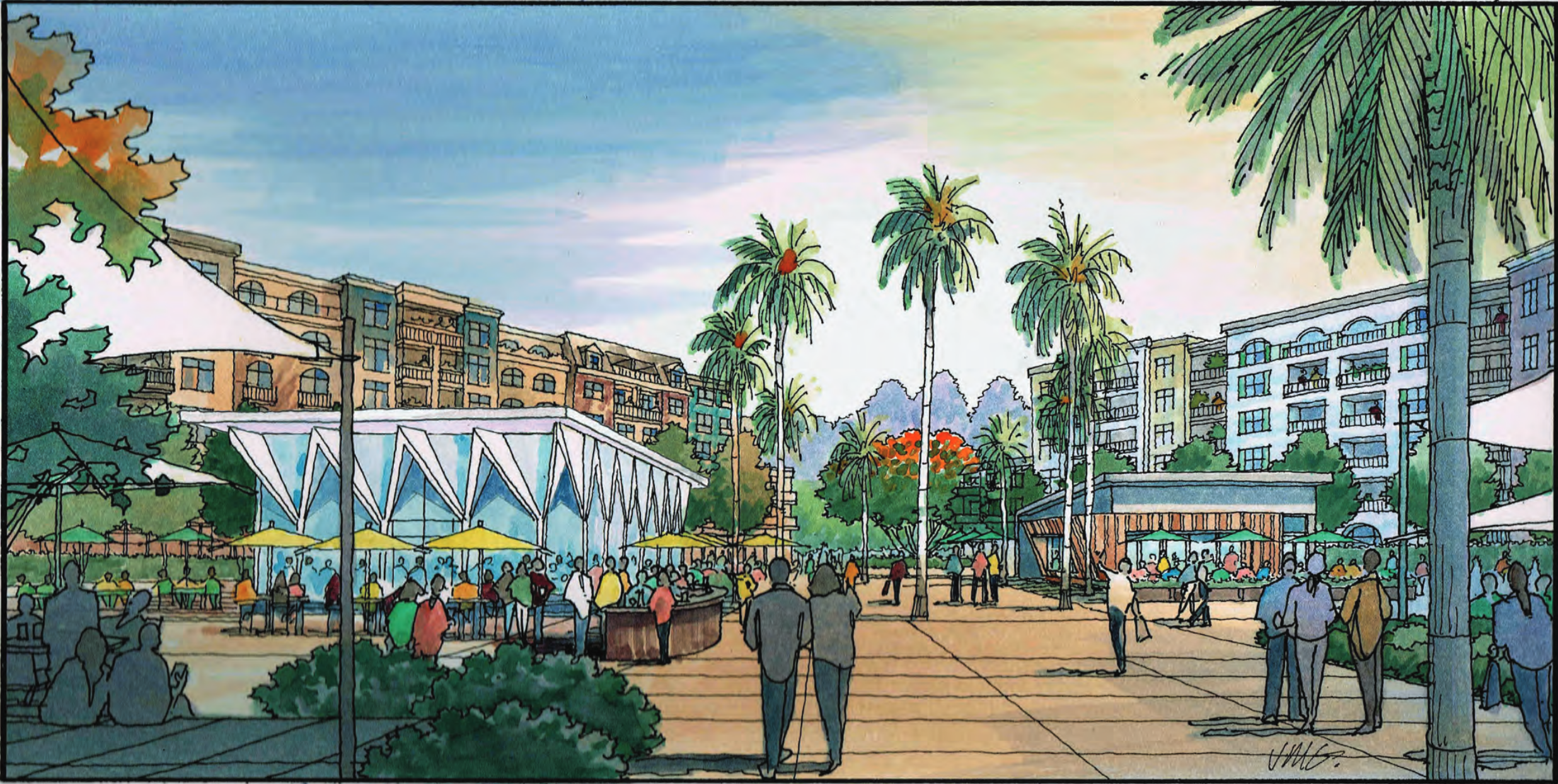 Weingarten’s revamped Cambrian Park Plaza vision comes as the city braces for the looming deficits due to the coronavirus-related shutdowns that have halted or altered the way business is done and made things like construction loans trickier to come by.

But the developer appears to be undeterred.

“Weingarten is designing for the future and the planning process with the city plus construction will take many years combined, so beginning this stage of the project now makes good sense,” Froehlich said. “We remain excited about this Signature Project mixed-use village for Cambrian and are committed to seeing the plan become a reality despite Covid-19.”

Foley said the company’s aim to get an approval in about nine months seems “optimistic,” but she also had nothing particularly negative to say about the project or what might hold it up.

Her office will host more community meetings on the project, likely virtually. Some residents may be hesitant about the height, she estimated, and still to come is a detailed traffic study. But that didn’t dampen her enthusiasm Thursday.

“Weingarten listened to us and what we were pushing for were things that the community was pushing for, so we've been very pleased,” Foley said. “This is the gateway to Cambrian. This project is a signature project and when it is done, it will be stunning.”