Parents of Audrie Pott, the Saratoga teen who committed suicide after being sexually assaulted by classmates, are furious about a political mailer that makes it look like they support Kevin Jensen in the Santa Clara County sheriff’s race.

A mailer endorsing Jensen, a retired lieutenant, lists a series of alleged “blunders” by 16-year incumbent Sheriff Laurie Smith. It accuses Smith of failing to discipline a deputy for mistakes made during a 2007 rape investigation at De Anza Community College. It also alleges she gave 49ers linebacker Aldon Smith “celebrity treatment” during his DUI and weapons possession arrests in 2012 and 2013.

“Regardless, for anybody to do this, to make it look like we’re endorsing anyone, is just a tasteless travesty.” —Larry Pott

But the mailer crossed a line, according to the Pott family, when it cited a 2013 Rolling Stone article that reported Smith lost evidence in the Pott social media bullying and rape case, which eventually led to the defendants walking away with minimal sentencing. 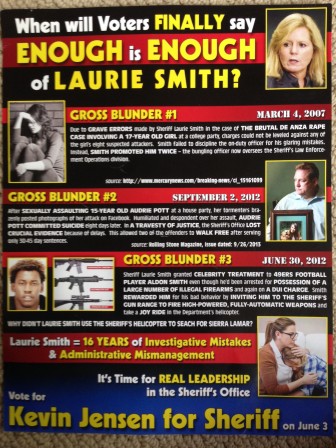 Kevin Jensen's supporters sent out this mailer, which specifically mentions Audrie Pott and her case.

“That’s ridiculous,” said Larry Pott, Audrie’s father. “Absolutely ridiculous. They’re talking about a justice issue, something that happened in court. This had nothing to do with the sheriff.”

The Pott family, which now runs a nonprofit foundation, wants to make clear that it doesn’t support either candidate for sheriff.

“Regardless, for anybody to do this, to make it look like we’re endorsing anyone, is just a tasteless travesty,” Larry Pott told San Jose Inside. “We feel that this was done without any effort to contact us. We have nothing to do with it, but here I start getting calls from me friends, from my mom, because my picture is on it.”

“I can tell you specifically that no evidence was ‘lost’ nor did anyone ‘walk free,’” she said. “The light sentences were handed out by Judge Jesus Valencia, not the sheriff. The flyer was so bad that we really felt we had to speak out. …We will not allow our family to be a part of a political campaign that spreads lies, or any political campaign, for that matter.”

Kevin Jensen is now distancing himself from his staunch supporters after a campaign mailer used the Audrie Pott tragedy for political purposes.

Jensen tried to distance himself from the mailer, although it is paid for by his biggest supporters: the Correctional Peace Officers Association (CPOA) and the Deputy Sheriff’s Association (DSA). Without these groups, Jensen would have virtually no institutional support and little name recognition. His personal campaign raised just $16,296 as of March 17, while the outside groups supporting Jensen and opposing Smith have spent more than $200,000.

“What they do, their campaign, is independent from me,” says Jensen, who sent an open letter articulating as much after securing their endorsements last year. “I appreciate their support, but I want to keep my message clean. I don’t want pieces that distract from my message.”

“What they do, their campaign, is independent from me.”
—Kevin Jensen

The mailers mark another misstep by the union-backed committee endorsing Jensen.

Complaints to the Fair Political Practices Commission (FPPC) in March pointed to discrepancies in their campaign filings. Also, earlier this month, his supporters posted up a pro-Jensen banner on a Highway 85 overpass that caused a 40-minute traffic jam.