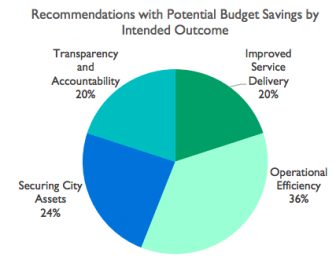 The city has saved time and money by closing 42 recommendations from City Auditor Sharon Erickson in the past six months. But there’s a lot more work to be done, with 151 recommendations only partly addressed and 56 still open, according to a status report coming before the City Council on Tuesday.

“When implemented, a majority of those recommendations will improve operational efficiency of city departments,” the report reads. “Others will improve transparency and accountability, or improve service delivery. Others will help secure city assets.”

Meanwhile, 10 recommendations that were previously made a priority are still pending, including a plan to quicken firefighters’ emergency response times and assess staffing to make sure the city is keeping up with fire inspections.

The potential budget savings from 25 open recommendations amounts to $11.6 million, according to Erickson’s status report.

Following up on overdue accounts in the San Jose Fire Department would save $1.2 million. Obtaining software to conduct payroll reviews in the Office of Equality Assurance would save $300,000. Renegotiating an integration agreement with the Santa Clara Valley Water District would save an estimated $2.8 million.

Reducing overtime for supervisors would save $1.6 million, requiring employees to lower compensatory time would cut $1.1 million and reviewing cellphone billing could save $200,000. And a recommendation to eliminate the public art requirement for underground utility projects stands to save the city $2.2 million.